Review: Batgirl and The Birds of Prey #16 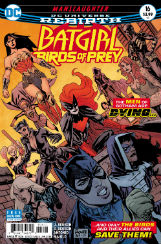 This arc just keeps getting better and better. I mean the last issue really set the bar high for this arc. But lord behold, here comes issue #16, raising the bar even higher!

Batgirl and The Birds of Prey #16 continues on directly from where the previous issue left off. A mysterious and dangerous plague of unknown origins circulates across Gotham. Rendering every male in Gotham sick and bedridden.

Some infected individuals include Bruce Wayne, Joker, Riddler, Penguin, Nightwing and Jim Gordon. The only male who hasn’t been infected yet is Oliver Queen/Green Arrow.

To combat this potentially deadly virus, Batgirl and The Birds of Prey gather a posse of heroes, and villains, to uncover the plague’s origins. And what a posse it is. They’ve got an amazing posse consisting of Batwoman, Gotham Girl, Spoiler, Harley Quinn, Poison Ivy, Lois Lane and…

Yes, the Amazonian Princess herself has joined the fray! Her awesome, single-page entrance was undoubtedly my favourite moment in  issue #15! 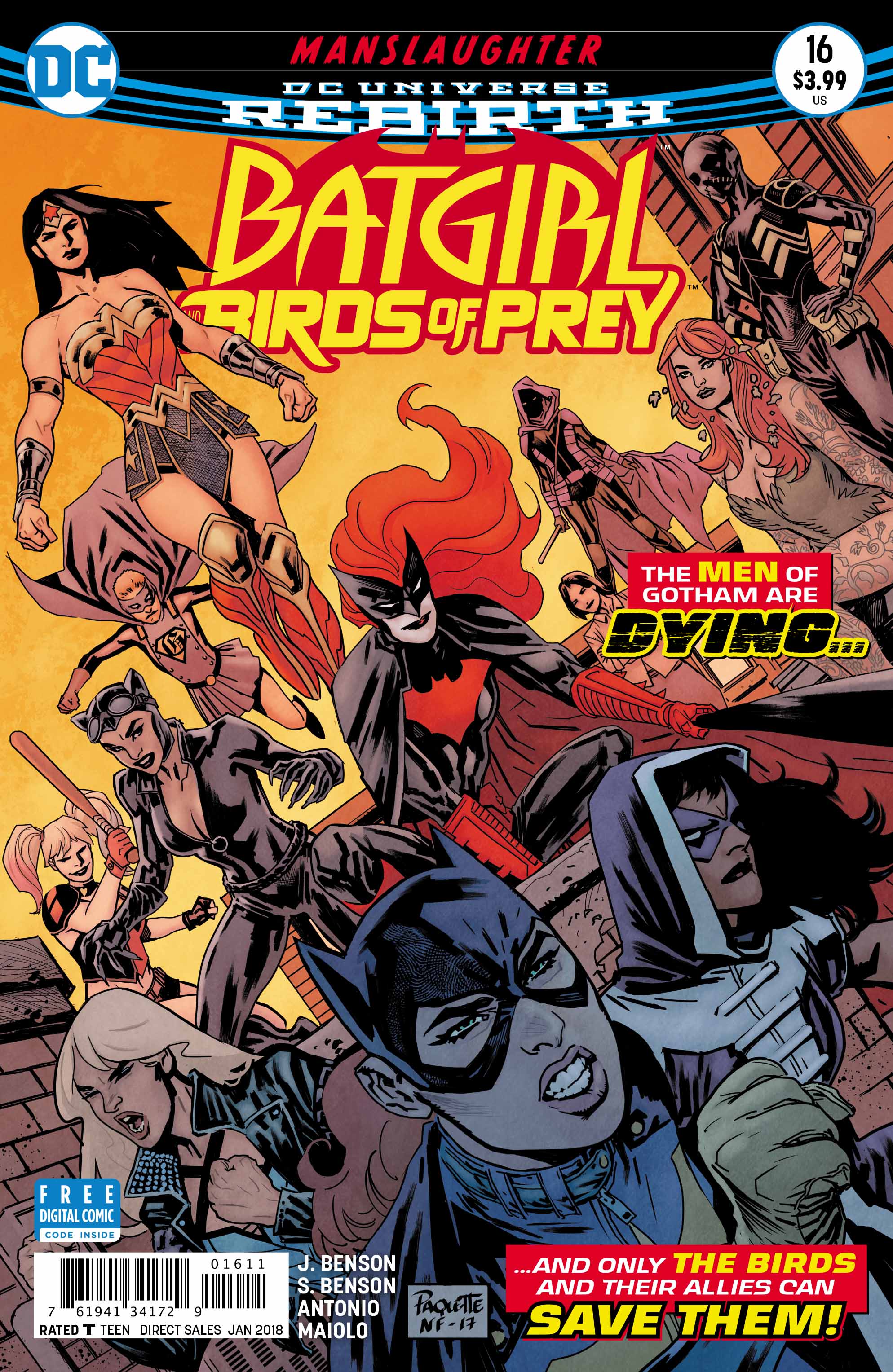 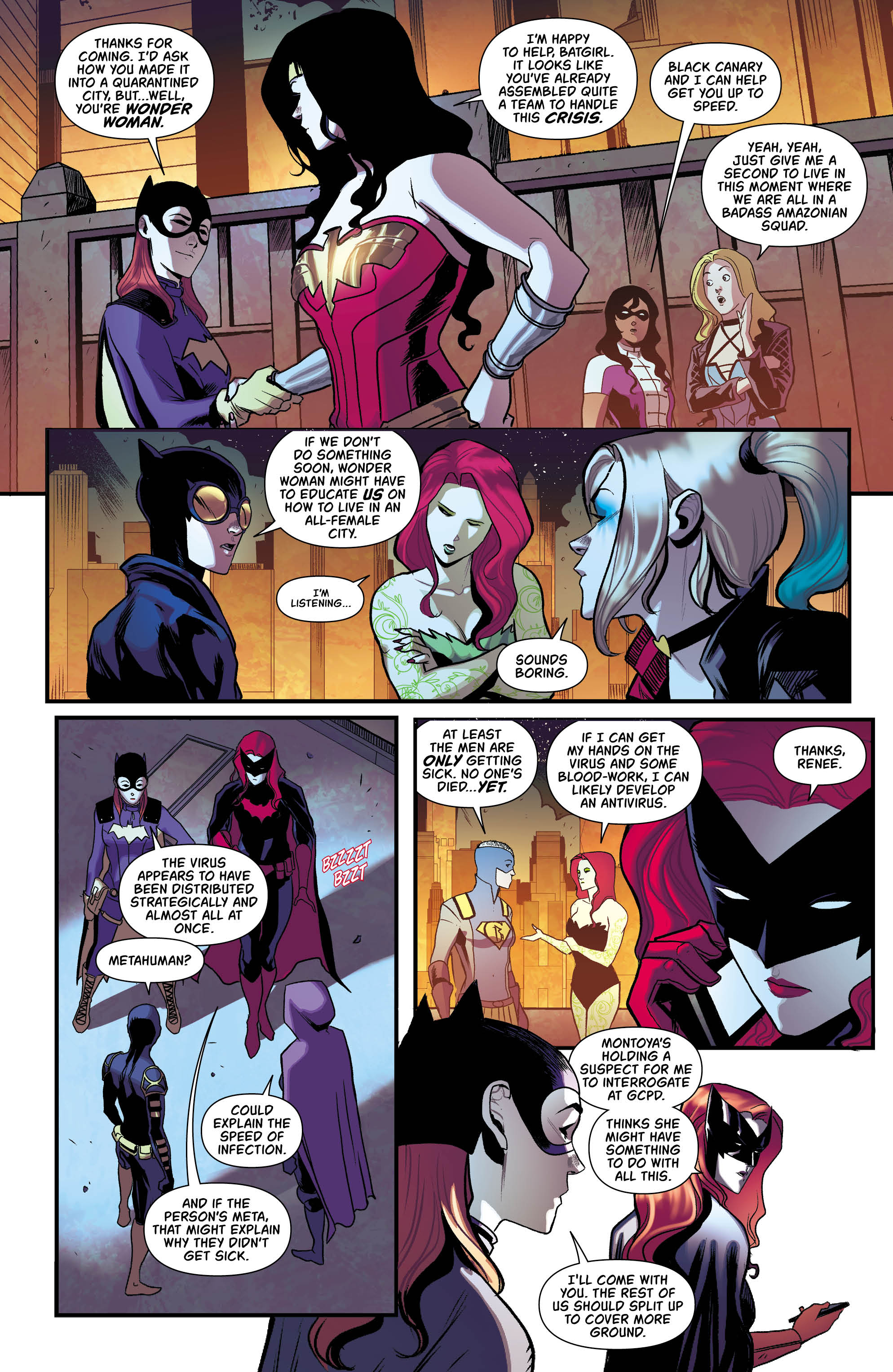 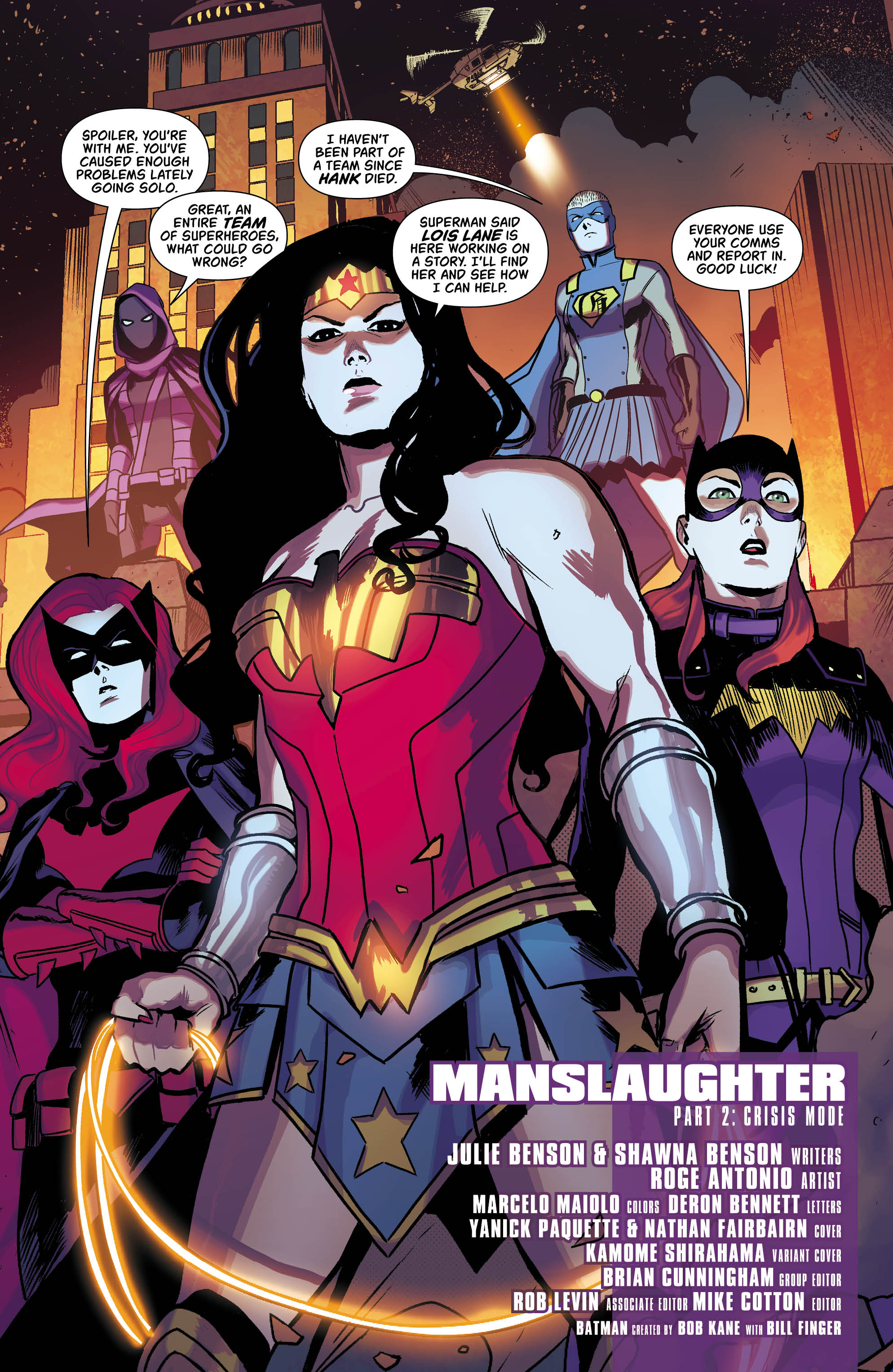 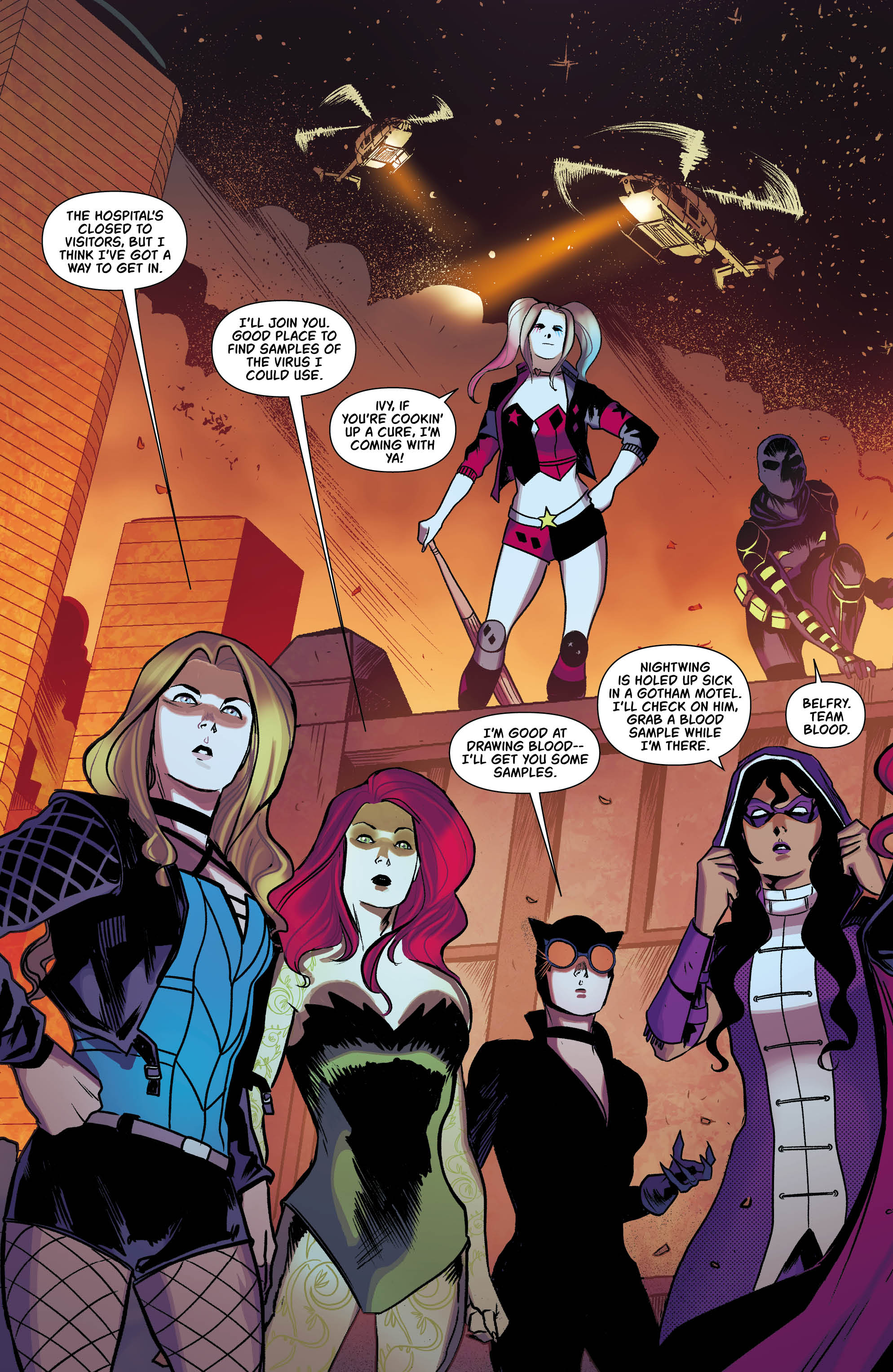 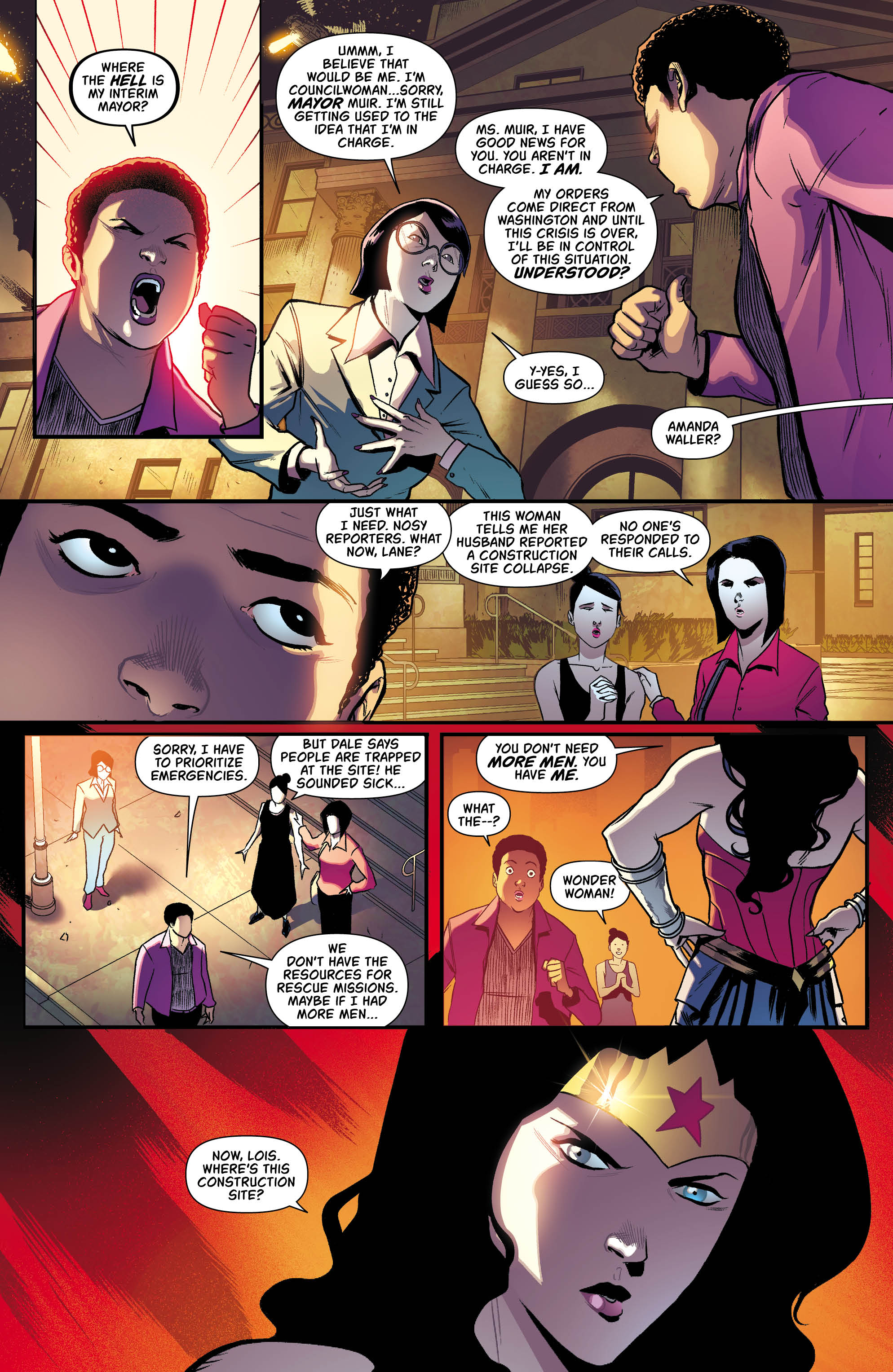 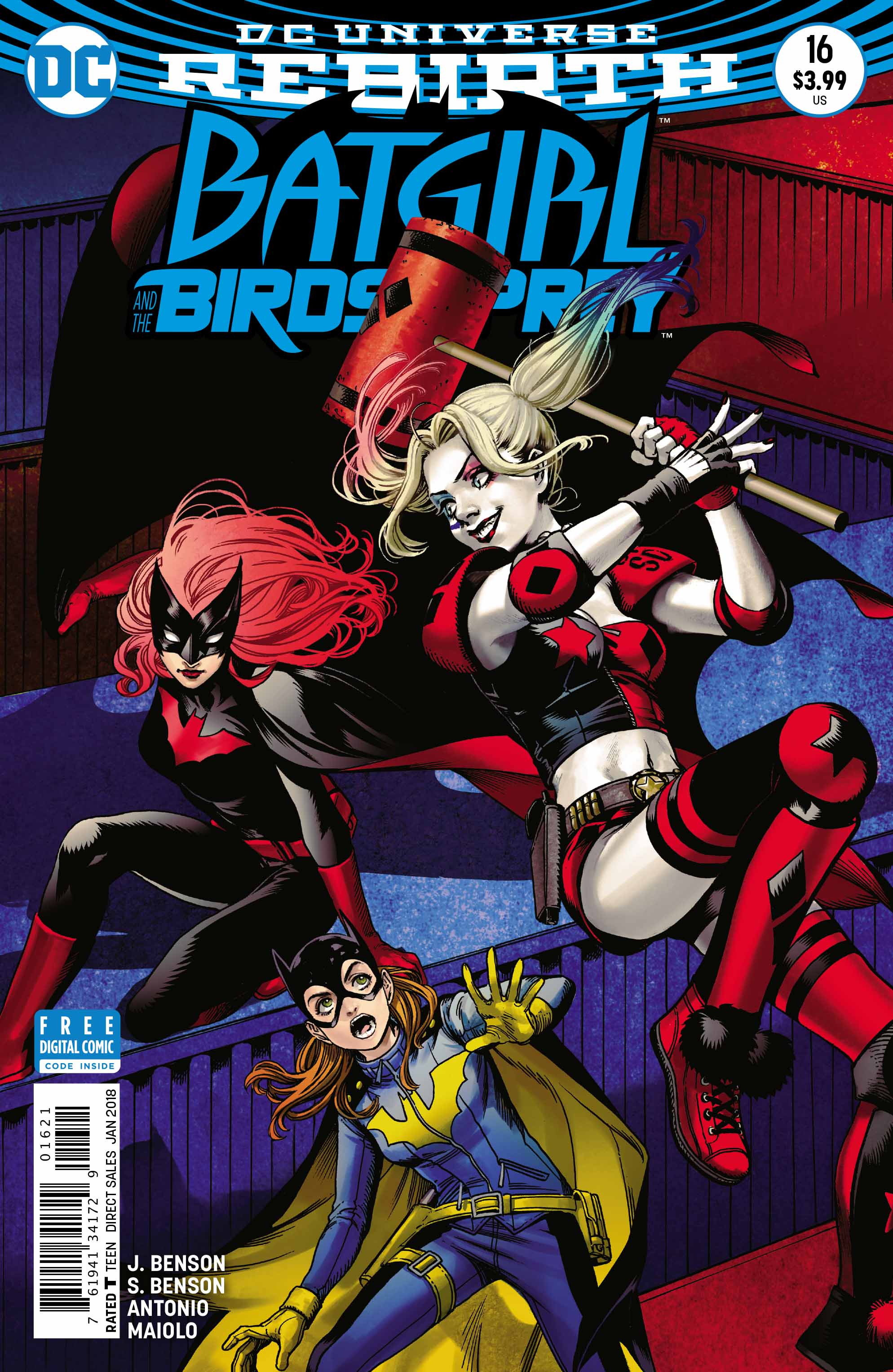 The posse split up to cover more ground and obtain blood samples from various infected males so Poison Ivy can hopefully brew a vaccine.

Just as tensions escalate between Amanda Waller and our heroes, the villains finally- and rather theatrically- reveal themselves.

The thing that astounded me the most about this issue is, despite the number of characters, the plot still flowed smoothly. Although there were times where I thought some panels were  clouded with too much exposition, I found the plot had a well-balanced pace. I also commend Julie & Shawna Benson for giving time for each character’s individual search for blood samples, whilst never detracting from the main storyline.

No character was shoehorned into the plot. Every character had a purpose to serve in advancing the plot.

Out of the artwork, I found it was the coloring that stood out the most. Colorist Marcelo Maiolo did a fantastic job of making the whole comic look bright, the colors were diverse and realised every character’s distinct costumes beautifully. Roge Antonio’s drawings are still outstanding and has improved greatly since the “Blackbird” story arc. His unique drawing style has become synonymous with the series and I honestly can’t see anyone else as the series’s illustrator. There is one panel I have to point out however. In this panel, we see our heroes grouped together discussing their next course of action. Right after Batgirl, Harley Quinn and Batwoman’s kidnapping. The panel is high angle, so you’re able to see all of the heroes in frame. However, I noticed a few characters were drawn without faces. It’s a slight nitpick and makes- sense- for the trajectory of the panel, but it still looked very disconcerting. Still, the artwork holds up as always, and I found the masks worn by The Daughters of Gotham drawn truly menacingly.

The entire artistic team deserve to give each other a pat on the back. Their hard work and passion for this series has resulted in another incredible entry! Batgirl and The Birds of Prey #16 builds upon the foundations laid out by it’s predecessors. Delivering another issue full of fantastic artwork, an intriguing storyline, whilst also utilising it’s expansive ensemble beautifully.