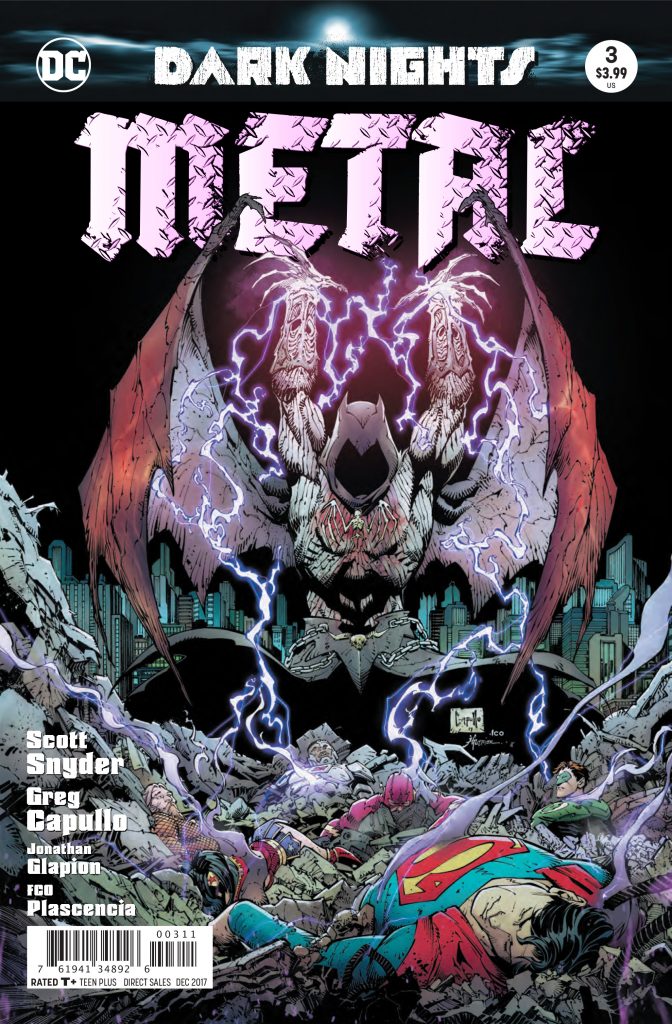 We’re officially halfway through the main Metal storyline and just about halfway through the entire Metal event with the various tie-ins. If you’ve been following the tie-ins, Dark Nights: Metal #3 gives a break from the mainly Bat-centric story and puts the focus on the other heroes; with Superman having a major focus. In some ways, this issue changed everything we knew about the event thus far and leaves us guessing to what’s next.

Dark Nights: Metal #3 opens, possibly teasing the Dark Nights: Metal soundtrack, with the Trinity, along with Lois, listening to Jon and Damian rocking out. Fun nods to theatrical theme songs aside; it’s a sweet family moment about celebrating a big win. Sadly, it’s all a dream—Barbatos kills Bruce and declares, “All roads lead back to darkness.” Diana wakes Clark up; it’s been seven days since they were attacked at the tomb where Barbatos appeared. Metropolis, much like the other cities that Justice League members call home, has been attacked. The citizens having been infected with the Doomsday virus, including Jimmy Olsen and Lois Lane.

From the start, Dark Nights: Metal #3 is about family. Rarely are the superhero names used when it comes to the Trinity—it’s Bruce, Clark, and Diana—not Batman, Superman, and Wonder Woman. Clark has witnessed his crime fighting brother die a thousands of times in his dreams, his wife has been turned into a living nightmare, and his son is currently in hiding. Barbatos is even referring to him as Clark Kent. This is a very personal story being told—Bruce and Clark are brothers and the evil Batmen exploit that. 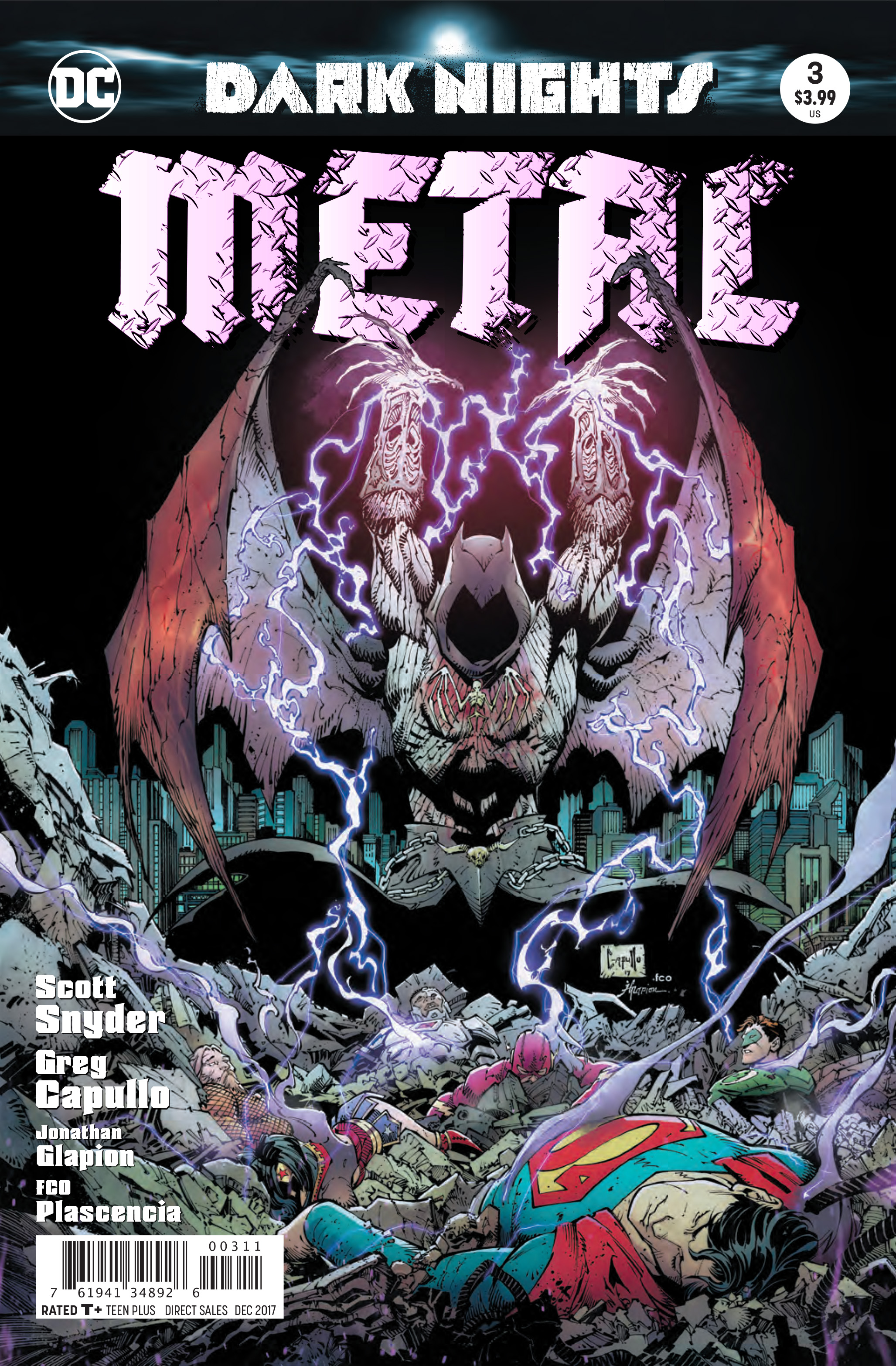 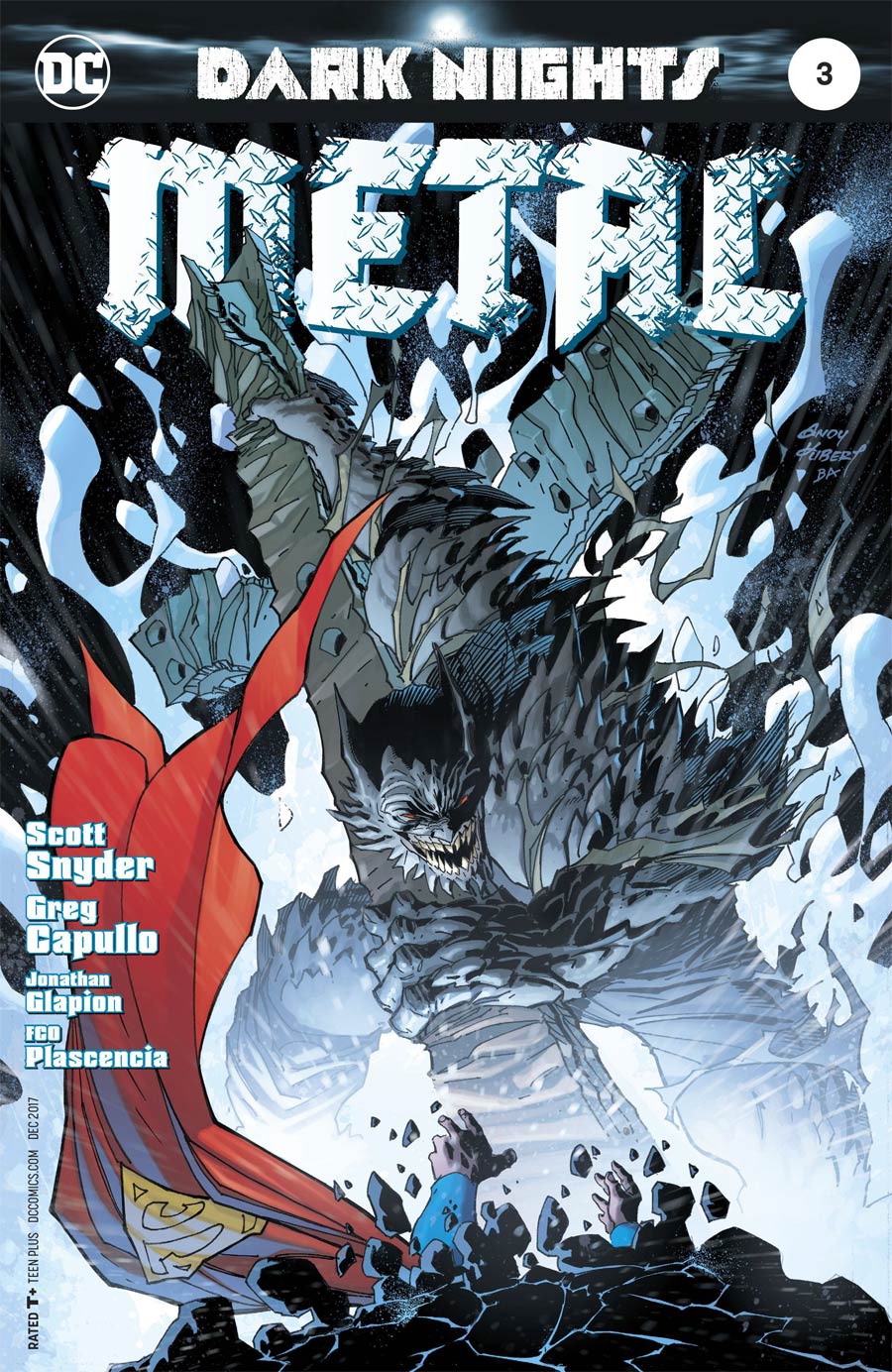 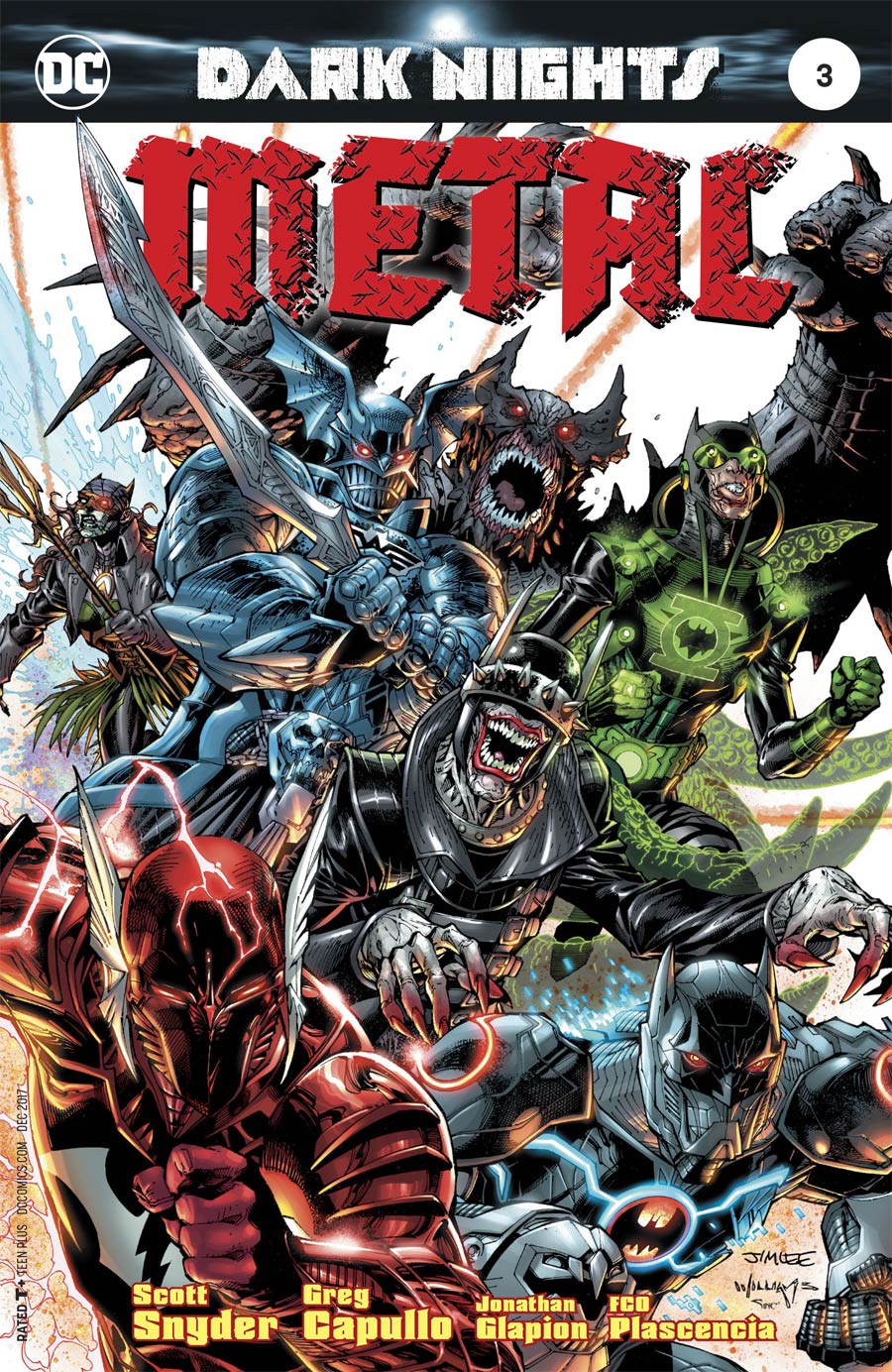 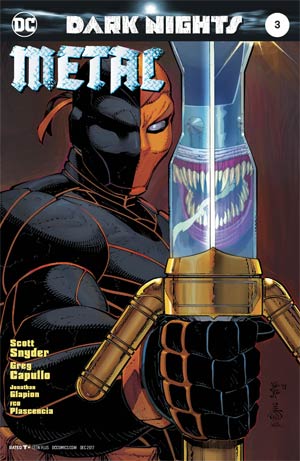 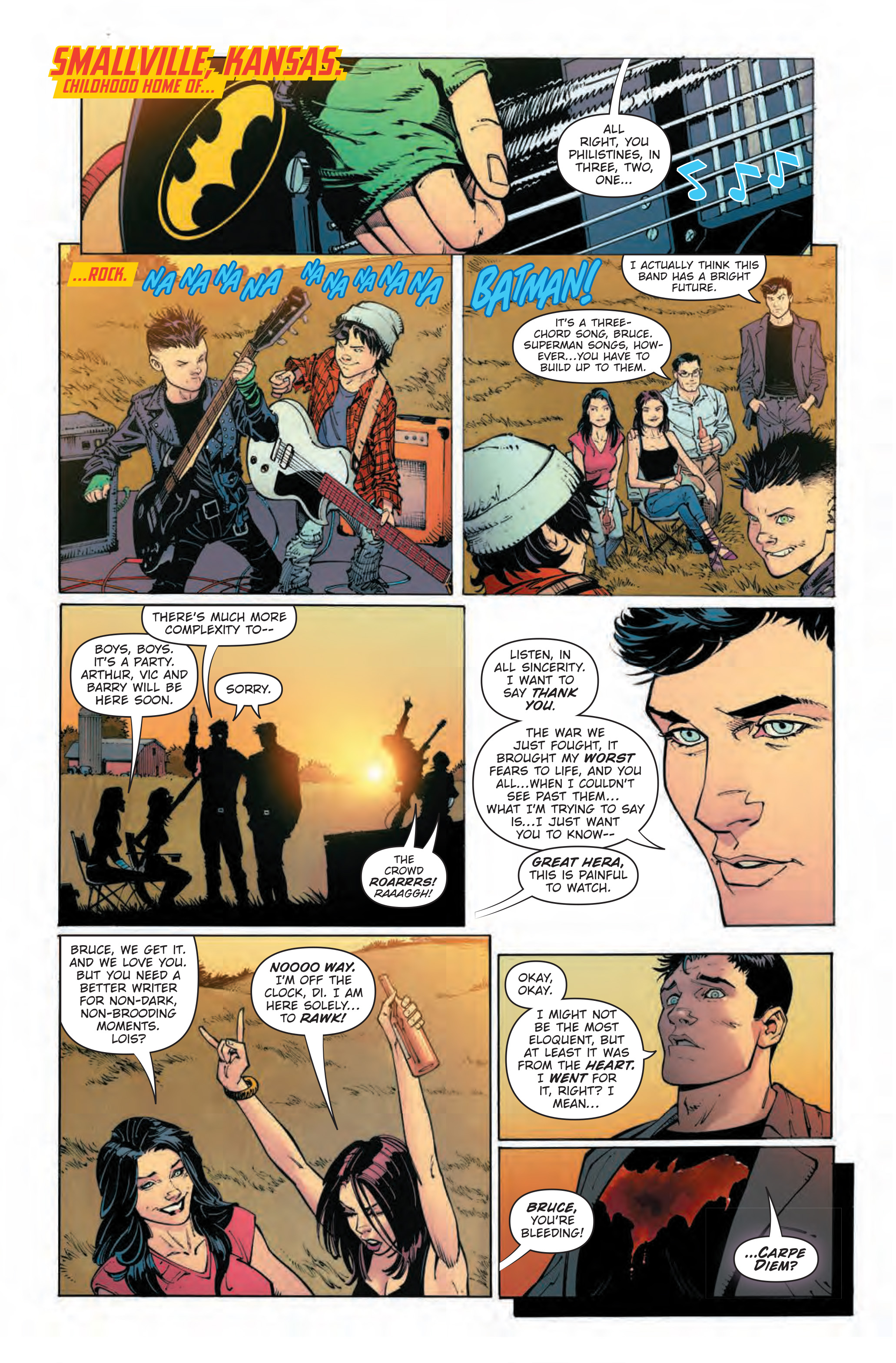 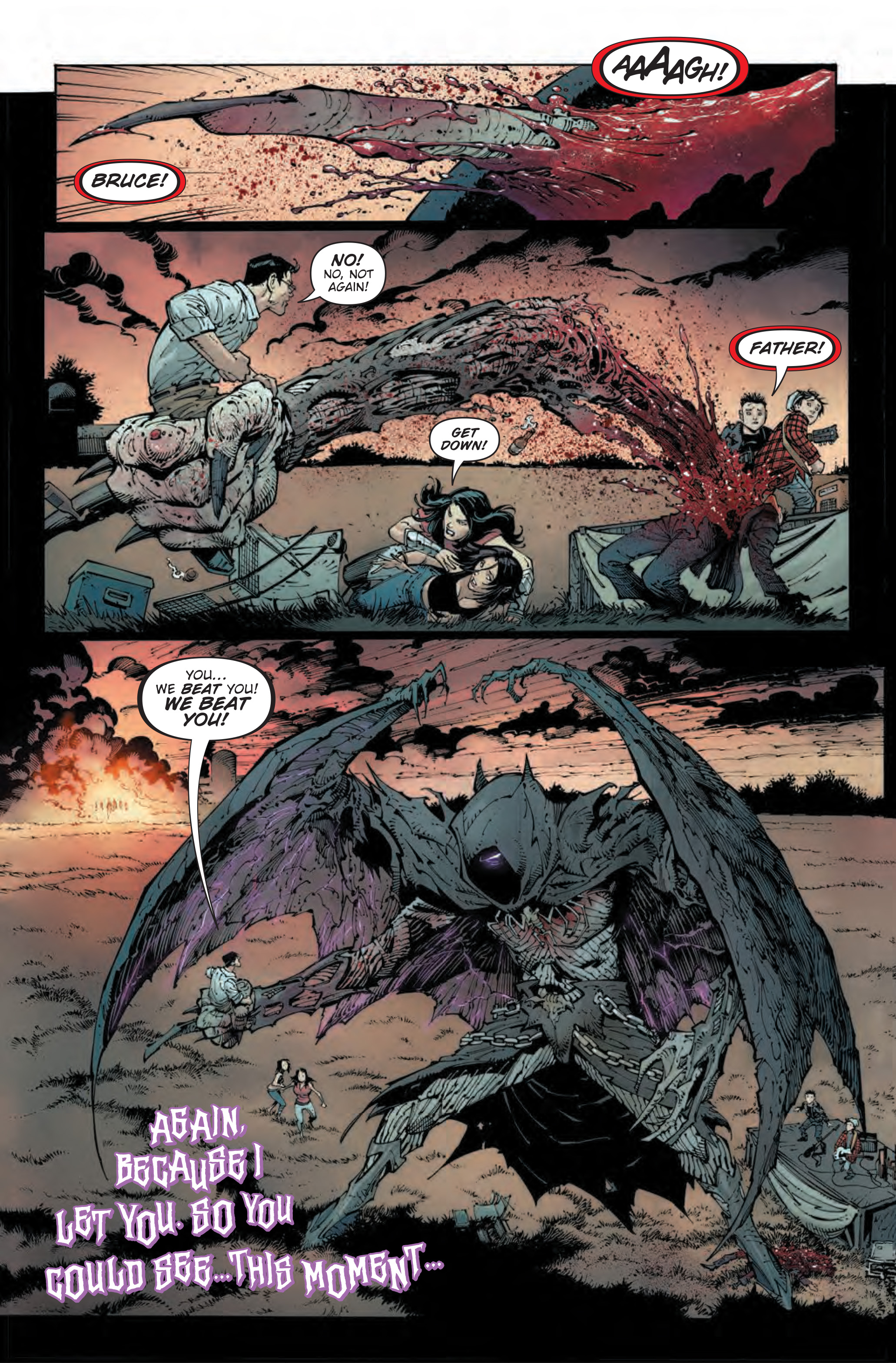 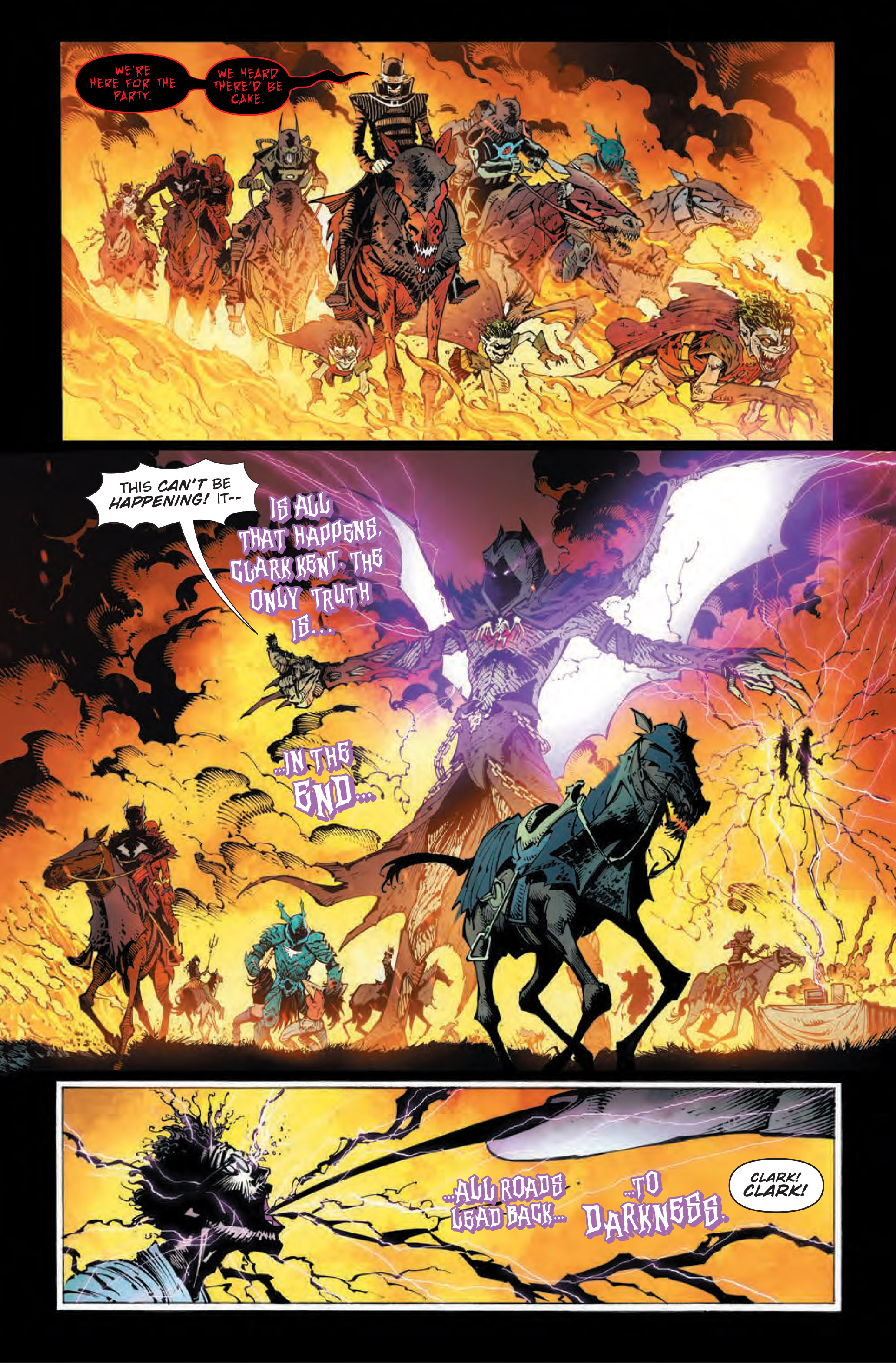 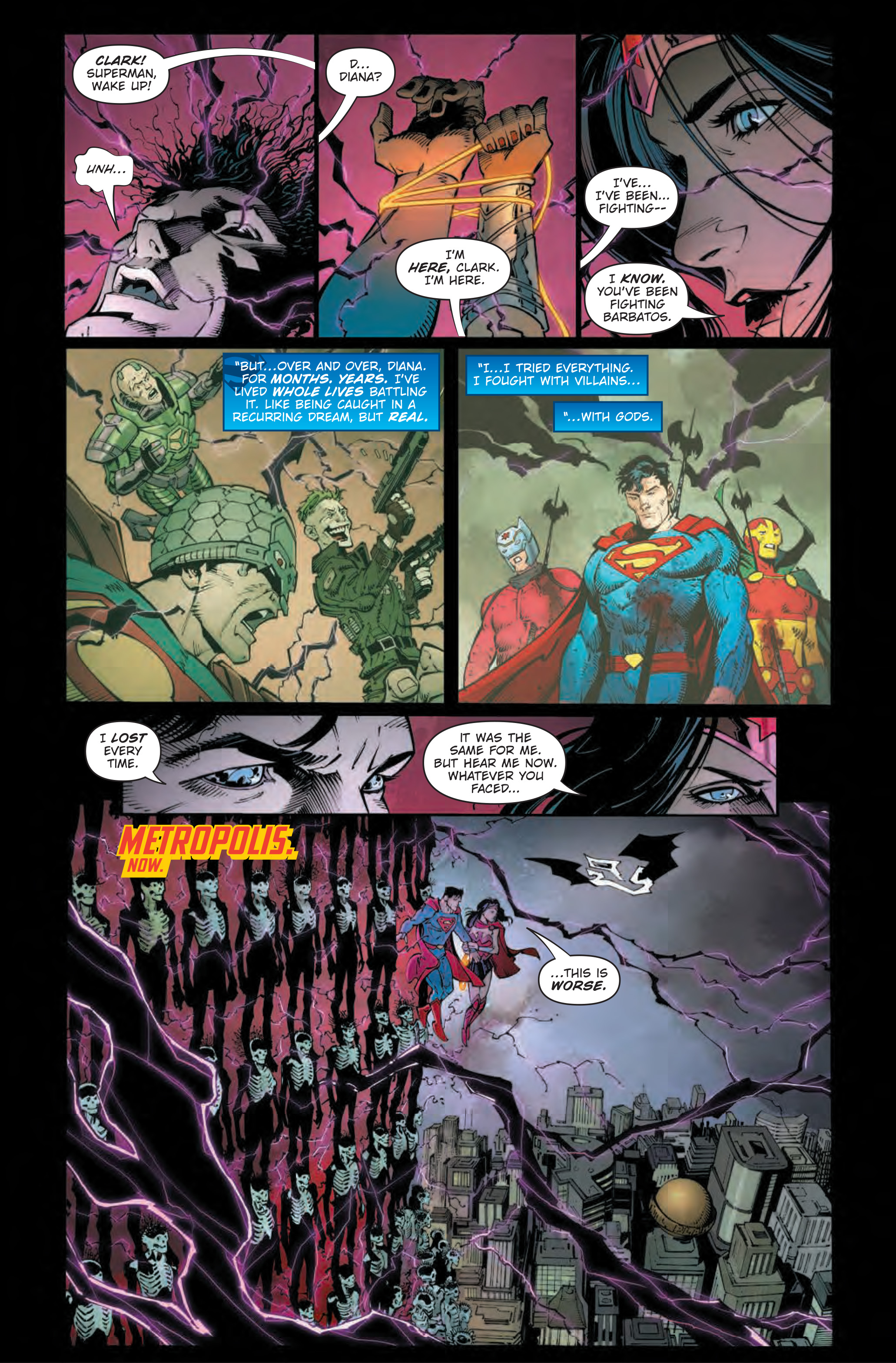 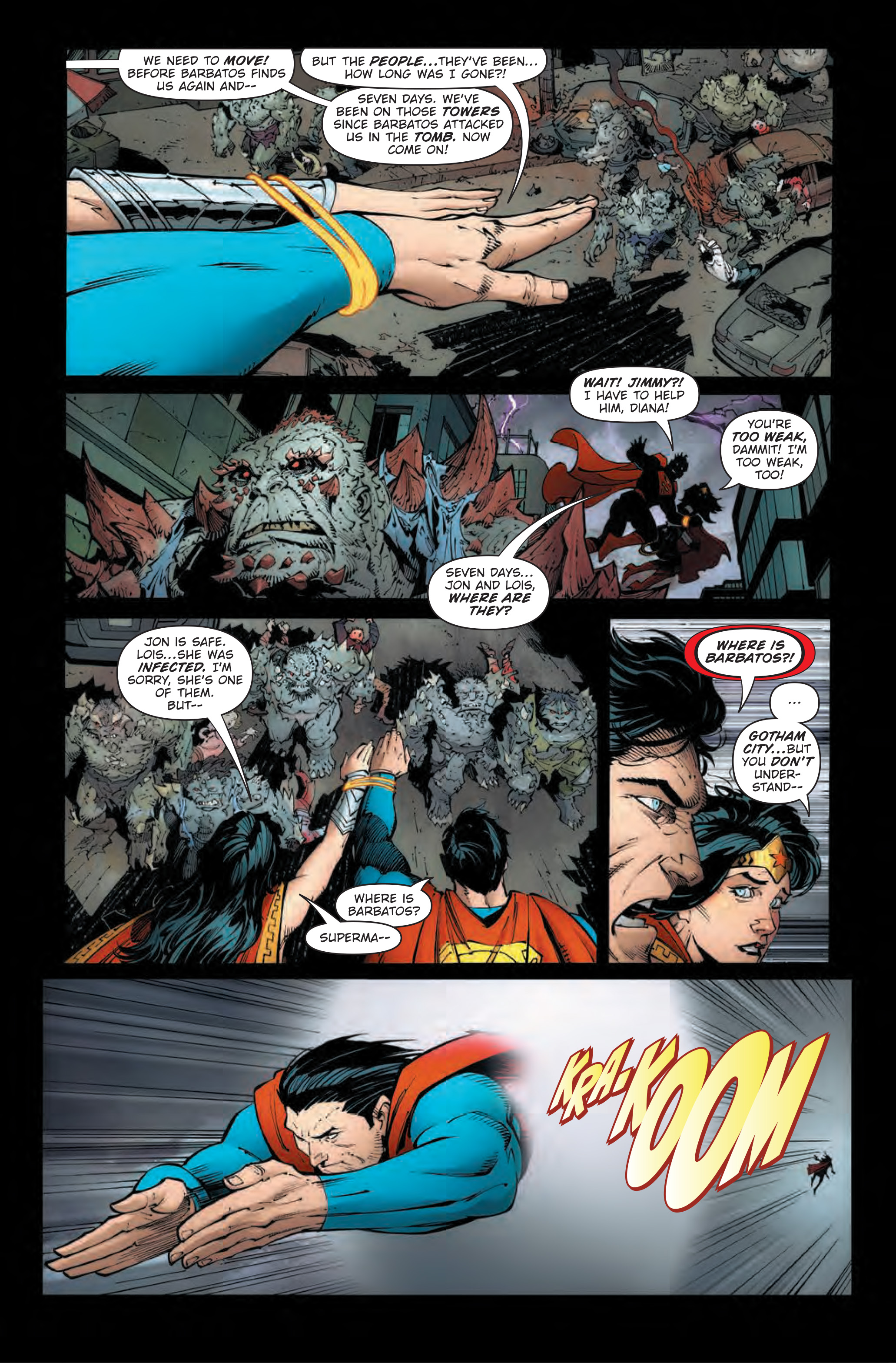 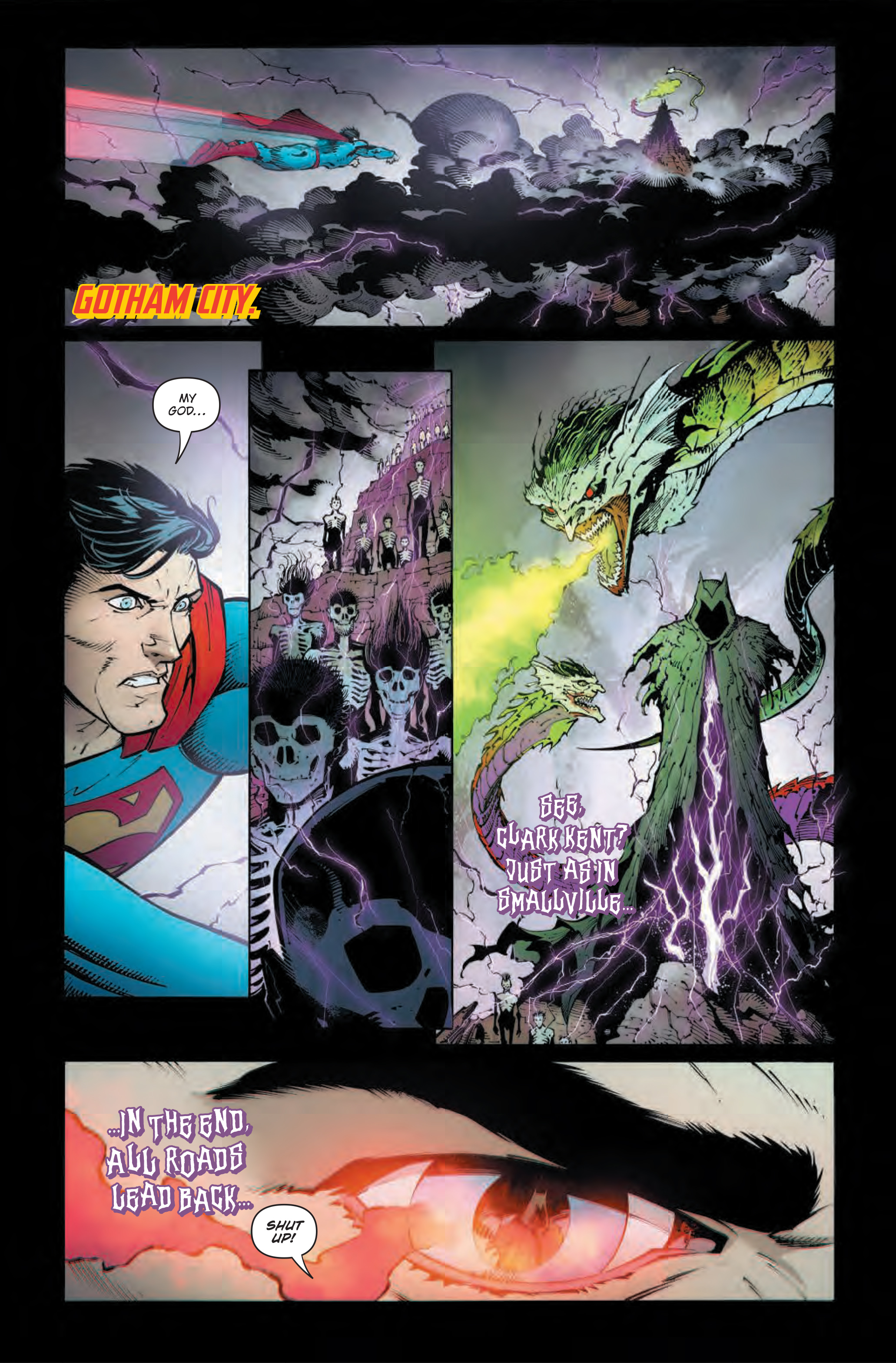 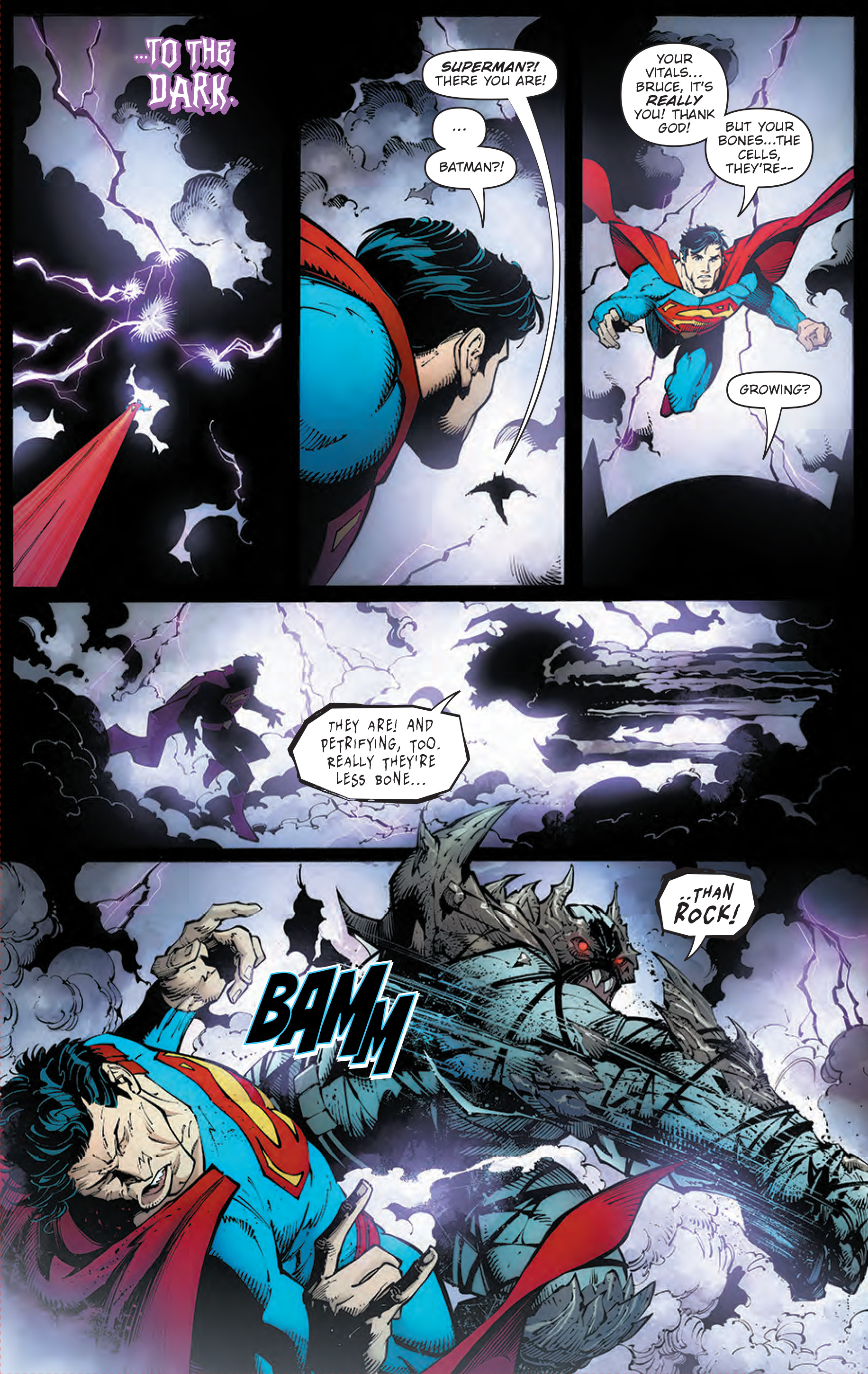 THE MAN OF STEEL

Bringing Superman to the forefront of Dark Nights: Metal #3 changes the story. We’ve had eleven issues of an event called Dark Nights, which centers on Batman—a hero born from the darkness. The villains are based on the fears of Batman and born from the Dark Multiverse—it’s been very bleak in these issues. Depending on what Superman mythology you believe in, he wears the symbol of hope on his chest. His optimism lifts us out of the darkness, if only for a brief time, and makes us believe things are going to turn around.

In a bigger turn of events, it’s been setup throughout the main Dark Nights: Metal series, and further explored in the tie-ins, that Batman was the key to everything happening. While I’d guess that’s still partially true, it seems that The Dark Knight was simply the key to open the doorway. When The Flash and Dr. Fate rescue Clark, the group of heroes discuss what their next move is. The Plastic Man egg is vibrating in patterns; which Mr. Terrific translates to coordinates that lead to more Nth metal (it was discovered in Green Arrow #32 that Nth metal can hurt beings from the Dark Multiverse) and to the Dark Multiverse itself.

Another great “family moment” happens between Clark and Damian—Clark is going to the Dark Multiverse to save Bruce. Clark is, in some way, an uncle to the current Boy Wonder; it also doesn’t hurt that Clark is the only one wanting to save Bruce. I won’t spoil the finale of the issue, but once he breaches the Dark Multiverse, we find out that Superman was who Barbatos has been after all along.

Scott Snyder knocks it out of the park again, though I would have liked to see what he could do with more pages. That seems to be an ongoing problem within Dark Nights: Metal; there isn’t enough room for the scope of the story. Dark Nights: Metal #3 has a lot of exposition, but I can’t blame Snyder for most of it. While the one-shots and other tie-ins have found their stride with pacing issues, the main story still stumbles—an extra handful of pages would fix that.

Greg Capullo’s art continues to shine. He’s having a lot of fun while putting these issues together. There are sections where it’s hard to appreciate what he’s doing because the issue is dialogue heavy at parts, but Capullo still manages to knock it out of the park. There is some disappointment that Capullo doesn’t get to play with the evil Batmen more than he is, but the one-shot books fill those voids for now.

Dark Nights: Metal #3, in the overarching story, is another fine addition. The heavy exposition, while needed for readers who may not be reading all the one-shots and tie-ins, slows down the pacing of the story. I’m hoping that issue four takes a cue from the extended stories in the event—they have found a great way to solve their pacing issues the last few weeks. And while we have to wait over two months for the next issue, there will be plenty of other one-shots and tie-ins to keep us busy; including Batman Lost #1—the story of Batman in the Dark Multiverse!