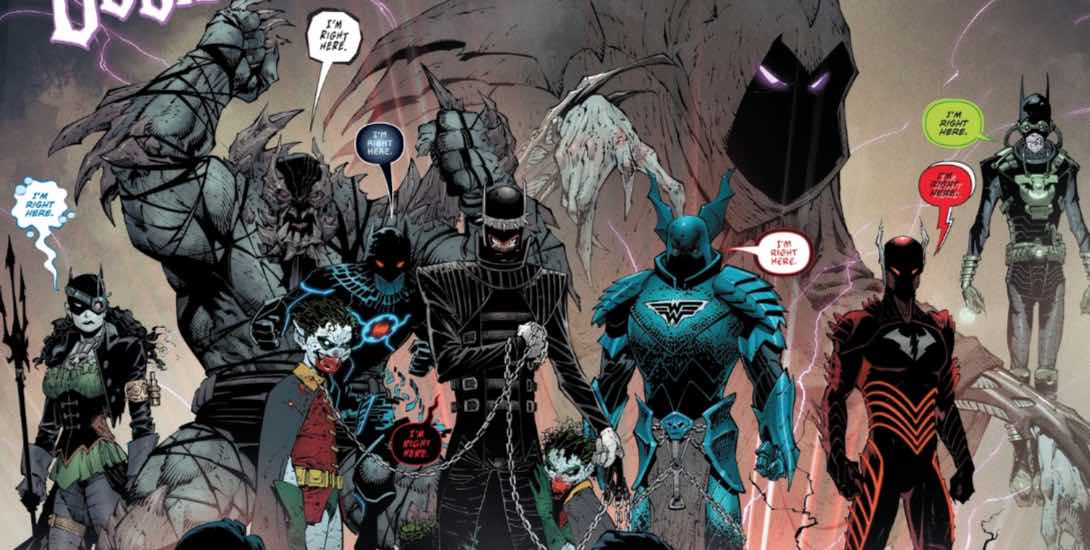 Welcome to our first DKN Roundtable where the staff gives commentary and opinions about the latest Batman news. Here, we kick things off with a closer examination of the Bat-centric DC Comics event comic Dark Nights: Metal #2. On the panel are DKN writers Eric Lee, Ryan Lower, and Kevin Gallagher.

Overall, how did you like the Dark Nights: Metal #2?

Ryan Lower: Fun, frustrating, surprising and weird. And that’s my review of Metal #2. [Laughs] I’m glad Batman is in it. Otherwise, it’d be too out there for me to continue to follow. But there’s just enough to keep me intrigued on where it’s going.
Eric Lee: I thought that issue two was better than issue one, but yeah, it is super out there.
Kevin Gallagher: Metal #2 was a fun read, how about that end?
Ryan: Pending the next issue will help how I felt about the end [laughs]. Batman turned into a portal….’Say what’? AND the Court of Owls said something along the lines of “Your whole life has led to this,” which to me implied this has been a “Plan” all along, and that doesn’t jive with my Batman sensibilities.

Kevin: The only downside-which I’m taking from Ryan’s review-is Snyder’s reshaping of Batman’s purpose. Like, he was destined to become Batman by other factors.
Ryan: Exactly Kevin, and I don’t play that game [laughs]. It’s uh–okay if it’s cool with everyone else, but I don’t like it when that happens (with Batman).

Eric: Honestly, I take anything the Court of Owls say with a grain of salt. They’re full of it. If they truly knew everything, then they should’ve known they would be ripped to shreds when they summoned the evil Batmen. 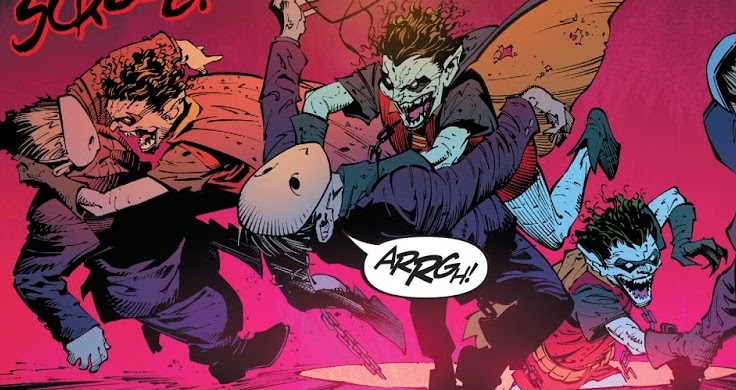 Ryan: [Laughs] This is true, Eric!

What did you guys think of the opening scene with the Justice League chasing Batman?

Kevin: That was one of my favorite scenes in the book. It had action, humor, and heart.
Eric: I personally hate it when Batman gets too powerful and takes out the Justice League, but this issue was fine because there was a lot of back-and-forth one-upsmanship.
Kevin: Exactly. The banter between the Flash and the faux-Batman was one of my favorite lines.

But my favorite moment: Superman is convinced he has the real Batman and has a very open and honest conversation. By the end of it, I feel the same betrayal he does when it ends up being Clayface.
Eric: That Superman scene was great. I enjoyed how Supes felt genuinely hurt that it was Clayface. Like, “Hey Bruce, I know you can mess around with other guys, but you can be straight with me.”

Kevin: Right? These guys are brothers and Clark honestly wants to help.
Eric: My personal favorite line from the chase scene is Damian telling Wonder Woman “Listen, Lady…” while driving a truck that is way too big for him.
Kevin: YESSSSSS! That line was so great—I popped out loud at my desk!

Ryan: So, the chase was my favorite part by far. I don’t like Damian, but loved his line to Wonder Woman. And like Kevin said about the Clayface part: fantastic. And Dick showing us the face modulator was a callback to New 52 Batman #1 when Dick had the Joker face mask.
Eric: Ryan, you made the perfect transition into my next topic.

What do you think about the callbacks from Snyder’s Batman run?

Ryan: The callbacks to his own run I appreciate. The callbacks to Grant Morrison’s run: I don’t really care for. I’m familiar with both, so it’s not from a lack of knowledge/familiarity. But Morrison took a sci-fi approach that I didn’t much like, and his stuff should be sort of left alone.

Kevin: I love the callbacks to his own work. Snyder brought me back to comics. His Batman run is GREAT. I just love the way he and Capullo work together—issue 5 of their Batman run will go down as one of my favorite issues of a comic. I’m waiting for one of these Metal issues to be THAT; where you get pulled into it from start to finish.
Eric: Kevin, I got more hooked into Metal with issue 2 than I did with issue 1. It felt more cohesive.
Ryan: Agreed Kevin, they’ve done weird stuff for two issues, so now it’s time to make sense with things. 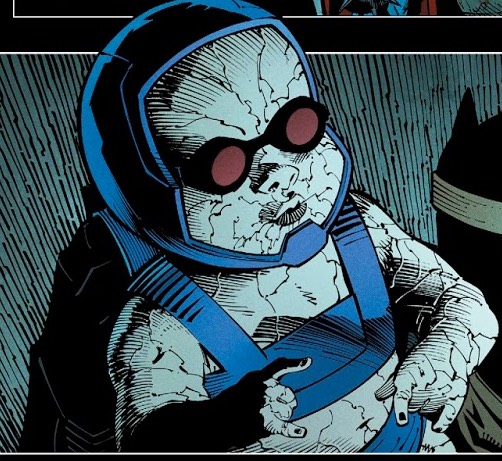 Ryan: WTF was that?!?  Yeah, x10 for Darkseid anything. Add a baby Metal-handed Darkseid, and I’m gone.
Eric: Ryan, I think this is where you and I disagree about the comic. I laughed really hard at Baby Darkseid.
Ryan: Darkseid, I laughed too. But thought WTF, again [laughs].
Eric: My only regret is we’re probably not going to get any explanation how Batman got him and apparently gave him goggles.
Kevin: I had no clue that baby Darkseid was a thing—so when I first saw it, I was flabbergasted. It was a key moment that took me out of the comic.

Eric: In the “Darkseid War” storyline in Justice League, Darkseid was killed by the Anti-Monitor and then revived as a baby only to be raised by his daughter because…. comics.

Let’s talk about the real issue of contention: Is Batmanium a great or stupid name? 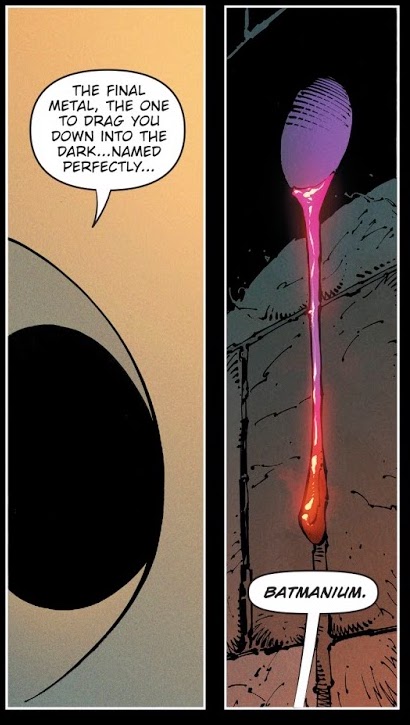 Ryan:  I don’t like Batmanium.
Kevin: I rolled my eyes, TWICE, when I read that.
Ryan: [Laughs]
Eric: [Laughs] It also may just be me, but I personally like the Batmanium name. I am imagining the Court of Owls getting together to focus group a good name for a made-up metal. Long story short, I hate the Court of Owls, and I was glad they got killed at the end.
Kevin: I would love to sit down for that focus group. What names were rejected?

Eric: Rejected names were probably: Batman-ogen or Bats-tasium or something like that.

Who was your favorite Dark Multiverse Batman? 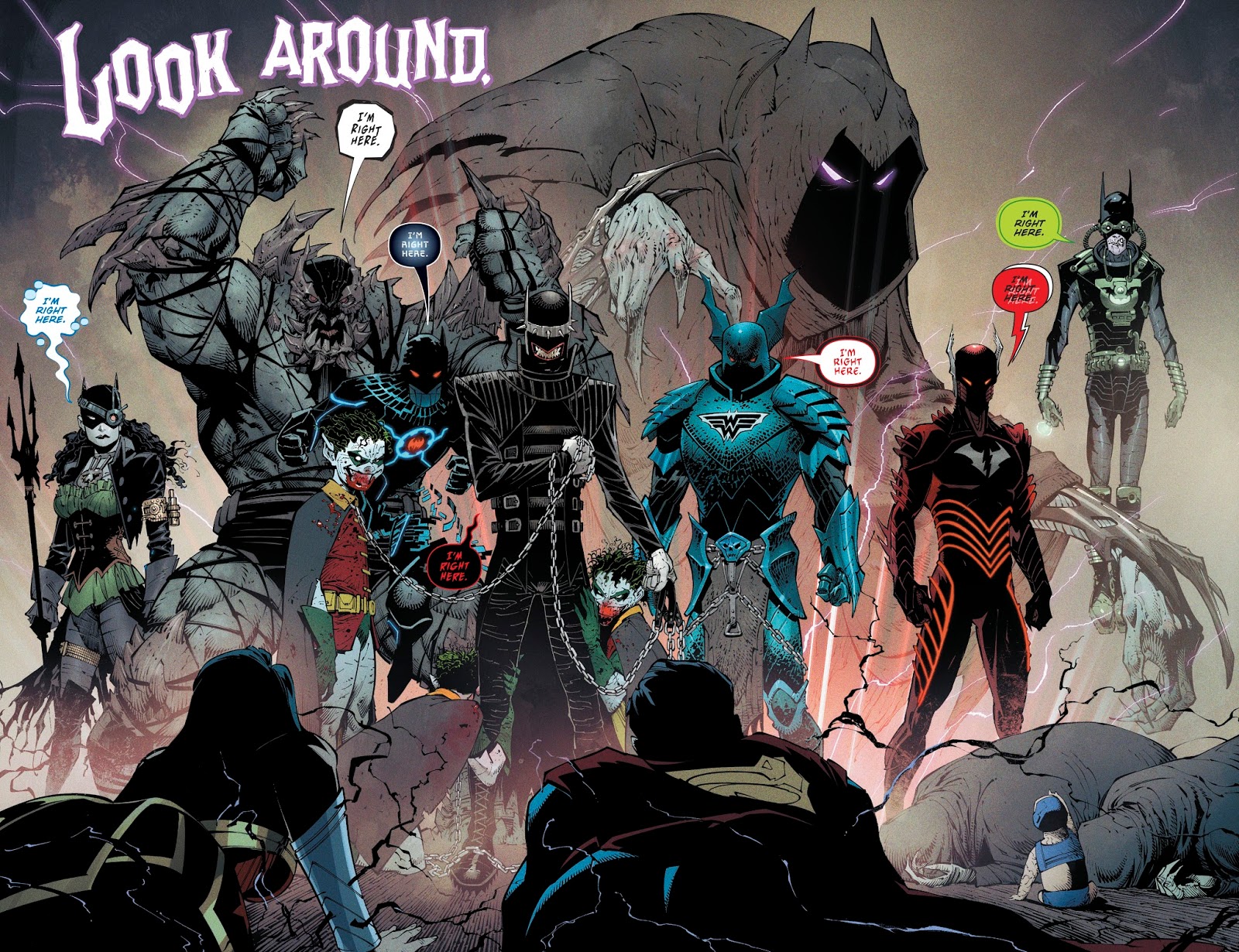 Kevin: How about how he stops the Robins by saying “bar”?
Eric: I am still trying to figure out why they kept on saying “Crow.”
Kevin: “Crow bar.”
Ryan: Yep, what Kevin said. I read they all were representations of Jason Todd’s Robin, and they said “crow” and the Batman Who Laughs said “bar” as in crowbar. 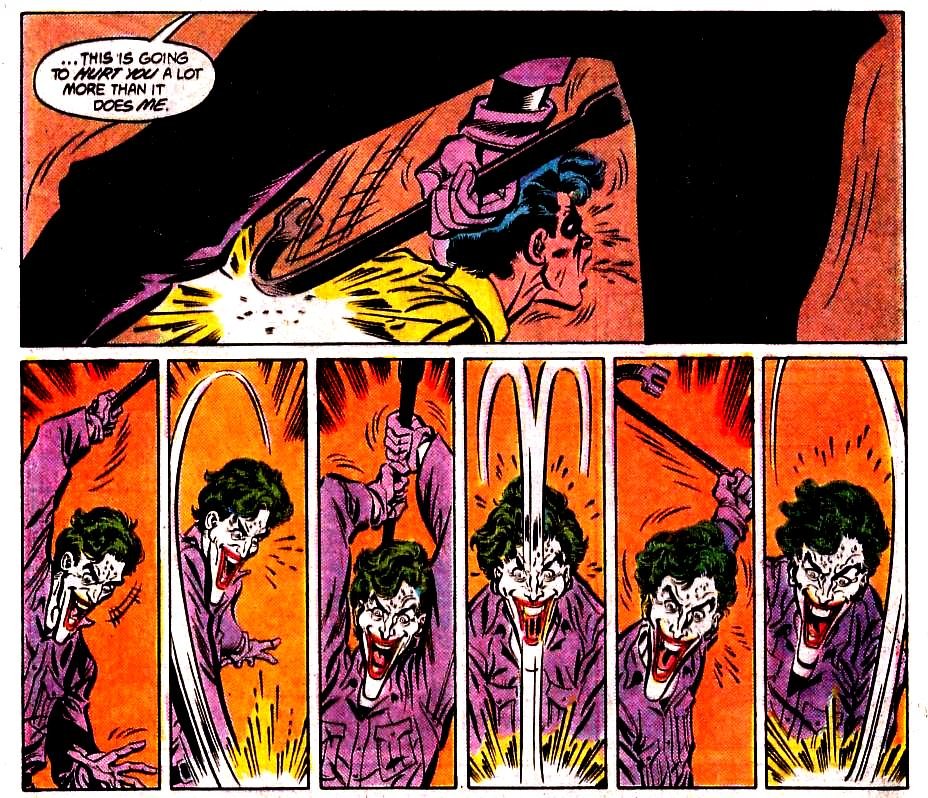 Eric: OH SNAP!! I really didn’t even think of that!

Ryan: Mind = blown.
Kevin: Yeah… it’s such a great insight of Batman’s guilt.
Eric: That makes sense. Snyder did say that the Batmen are supposed to be Batman’s worst nightmares come true.
Ryan: That one makes the most sense to me, the other [evil Batmen] I’m not sure what they’re getting at. But I’ll give it time to see how that fleshes out.
Kevin: That’s how I feel about Red Death. Even in the confines of what I know up until Metal #2, I don’t get most of the evil Batmen. Joker makes the most sense and, honestly, the ones that merge with the other heroes are baffling. Don’t get me wrong, AWESOME VisiCalc (on Murder Machine Batman).

Final Thoughts on the issue?

Ryan:  For the Darkseid stuff, again a fault of Snyder is he’s trying to play it so smart, and he doesn’t have to. It’s almost too ambitious and planting so many seeds that don’t turn into anything. Love his work, truly, but I’m so cautious about this book because it’s playing like some (comics) before where I’m like “meh” at the end. Other than that, I am enjoying a lot of it but am lost in what’s happening. And thank God, Batman is in it. [laughs]
Kevin: Final thoughts on the issue: It was a step up from issue 1, which I had already enjoyed a lot. I think it shows a lot of promise for where this event is going and am looking forward to see how the rest of Metal unfolds.
Eric: Metal holds a lot of promise. I don’t know where it is going, but I have full faith in Synder and Capullo to deliver.
Dark Nights: Metal #3 comes out on October 11, 2017.
Tags:batmandark nights metalGreg Capullojason toddjustice leagueScott Snydersuperman
share on: FacebookTwitter Tumblr
previous article
Review: Red Hood And The Outlaws #14
next article
‘Justice League’ Director Zack Snyder Will Not Return