DKN caught up with one of the shining stars of the DC Universe Animated Movies – actor Stuart Allan. Stuart is best known for his portrayal of Damian Wayne/Robin in this line of films. He also plays Russell Clay on Transformers: Robots in Disguise and roles in many live-action shows like Good Luck, Charlie, and The Haunted Hathaways. Most recently, Stuart once again depicted Damian Wayne for Teen Titans: The Justice Contract, available now on Blu-Ray, DVD and Digital HD.

DKN: Hi, Stuart! Do you mind if I call you Stuart? Or do you prefer “Mr. Allan?”

DKN: Thanks for agreeing to a quick chat! So, you play Damian Wayne, a.k.a. Robin, in this new connected universe led by James Tucker. This version of Robin has grown to be a fan favorite. What was it like when you found out you were cast in the role?

SA: It was an AMAZING feeling! This was one of the first kind of “smart ass” roles I’ve auditioned for. And to know that Andrea Romano, the now 8-time Emmy Award winning director, and her team chose me to emulate Damian Wayne and bring him to the screen for the first time was an amazing sense of honor, but at the same time, a sense of “Ok. I better not screw this up” (laugh).

I am so thankful to have been involved with Warner Bros. and to have kept working with them for the past, what is it… 5 years now? My goodness! Time flies! (laugh). The chance to work with such highly renowned cast and crew has been an unforgettable experience. 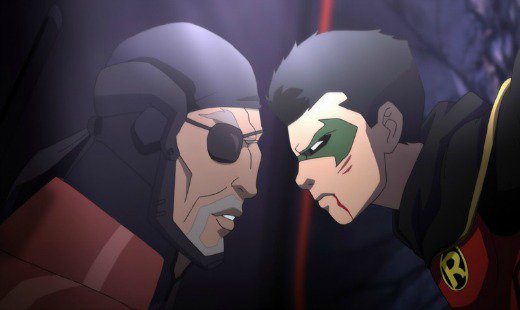 A captured Damian being tortured by Deathstroke.

DKN: Before getting the role, did you do any research for Damian Wayne? Were you already familiar with this version of Robin and the Batman universe?

SA: Absolutely! Before starting the audition, I had no clue who Damian Wayne was. I was familiar with the Batman and Robin universe. Who isn’t? It’s Batman! But, at the same time, I didn’t “know it” know it. So, like any good actor, I did my research: going online, read a comic, and going to the GameStop employees — who believe it or not, have TONS of DC knowledge. haha.

DKN: Damian has grown in the past five videos you’ve portrayed him, but he is still on a journey to find his place in the world. Is there anything in the comic books that you are interested in carrying over to animation?

SA: Damian has an interesting addition to the comics I’ve seen him in. I do like where Warner Bro. is taking Damian on his journey, and I think wherever they take me next will definitely be exciting!

DKN: We’ve seen Damian work with Batman and recently the Teen Titans, but there are still stories in the comics where he has operated solo. Is there a particular plot in the comics you would like to see make the transition to DTV?

SA: Like I said before, I think that Damian plays a fantastic role in the comics I’ve seen him in. It would be great to see him run solo, but I trust Warner Bros. in their plans for Damian (smile).

DKN: In a related question, is there anyone in the DC Universe you would like to see paired with Damian?

SA: It would be fantastic to see Damian team up with Superman’s son (Jonathan “Superboy” Kent), like in the comic of the Super Sons. That would be AWESOME! The utter power struggle between Batman and Superman carried to their kids. 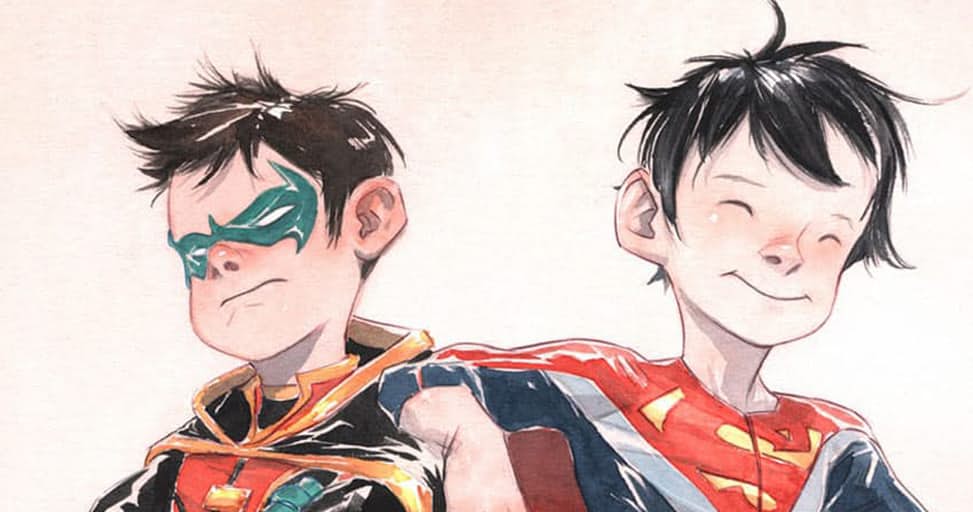 DKN: I hear you are a martial artist. Another famous actor who played Robin – Burt Ward – also studied karate prior to landing his role in the live-action Batman series. If given the opportunity, would you be willing to play Damian Wayne, or any Robin, in a live-action series? And would you do several of your own stunts?

SA: ABSOLUTELY! Sign me up! And of course, I would want to do my own stunts where I can. I’ve seen in movies, and television shows that actors who do their own stunts don’t have to worry about hiding a double in the mix, making way to better cinematography and fluency in the stunts. And it’s spectacular when that can occur.

DKN: Damian was being groomed to lead the League of Assassins someday. What is his drive now that Ra’s Al Ghul is gone, and is he influenced by Bruce and Dick?

SA: He is definitely under the influence of Bruce and Dick. At this point, he has somewhat abandoned his past with Ra’s Al Ghul, but he still has a power-struggle with himself to be the best. He’s ultra-competitive and not completely trusting of even his closest allies, and that somewhat comes from his father.

Even though he trusts Superman in the Justice League, he always has a stockpile of Kryptonite if things go south. lol Damian acts in a similar way. He tracks people; he does his research to know how to stop a threat from his closest friends if it ever were to arise.

DKN: You’ve been playing this role for about three years now. Have you picked up any tricks or traits from some of your fellow actors?

SA: The biggest trick I learned is to plant yourself firmly in your character’s shoes, and think about how your character would act in this situation, and then add your own little spice to it to make it unique. Not too much. You don’t want to alter the character, but a little spice makes your character unique to the audience. That’s why everyone loves Peter Cullen for Optimus or Kevin Conroy for Batman. That’s how you secure a strong reputation for yourself and also have fun!

DKN: San Diego Comic Con is right around the corner. While we know you can’t comment on anything specifically, can we expect an announcement soon regarding a new project with Damian Wayne/Robin?

SA: Warner Bros. doesn’t tell me anything until a week or two before they start recording (laugh). I don’t know where Warner Bros. is taking me next, but I definitely doubt that Damian’s adventures are over. And I can’t wait to see where Damian will go next!

DKN: Stuart, we appreciate you taking a break from your schedule to talk to us at Dark Knight News! We wish you continued success. Anything you want to add before we close out this interview?

SA: If anyone wants to, they can follow me on Twitter @StuartAllan42! Thanks for having me, Dark Knight News!

Scott Snyder to Disappear into the Shadows and Leave Batman