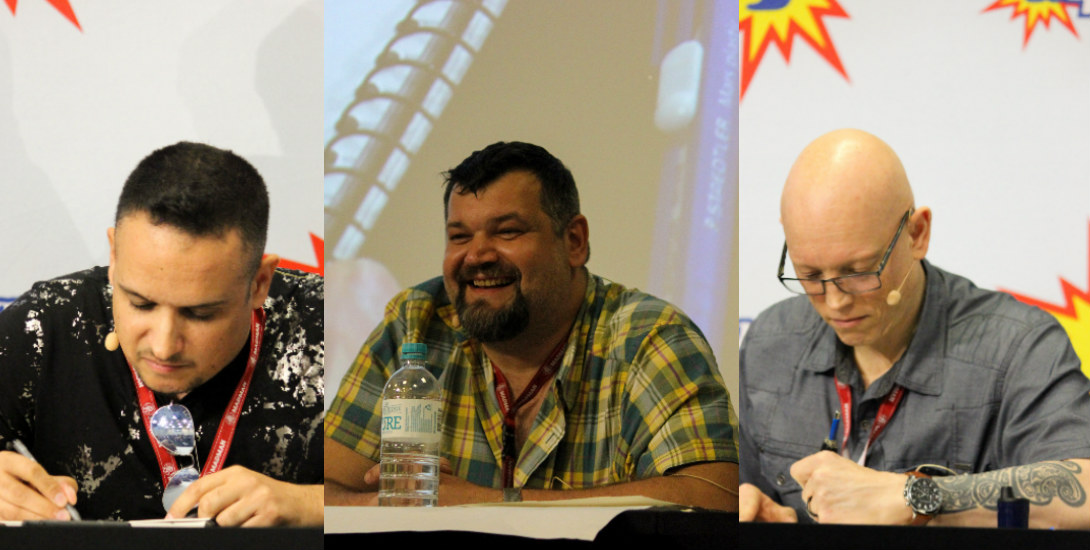 Just as Supanova Sunday was coming to a close, there was one final panel to go and view: the Supa-Star Sketch-Off, featuring the talents of David Finch (Batman, Wonder Woman), David Yardin (Jean Grey, Extraordinary X-Men) and Esad Ribic (Thor: God of Thunder, Secret Wars). Just walking into the room and seeing these three legendary artists sitting together up on stage was an immensely satisfying moment. Having previously met and chatted with David (Yardin) last November, and having talked to David (Finch) and Esad earlier that day, it was absolutely insane to get the opportunity to see them all draw in a “professional” environment.

I lucked out and managed to get a front row seat, so this experience for me was even more amazing. But once everyone had been seated, the three guests shared some backstory as to who they were and then the event kicked off. The rules were simple: the audience chooses a character from a comic book and a situation for that character to be in, and these three artists have half hour to sketch it. We narrowed it down slowly: DC, female, Poison Ivy, Mexican Day of the Dead. To add to the excitement of this, everyone who walked in was handed a raffle ticket; we were then told that each of the three artworks would be given away at random at the conclusion of the panel. 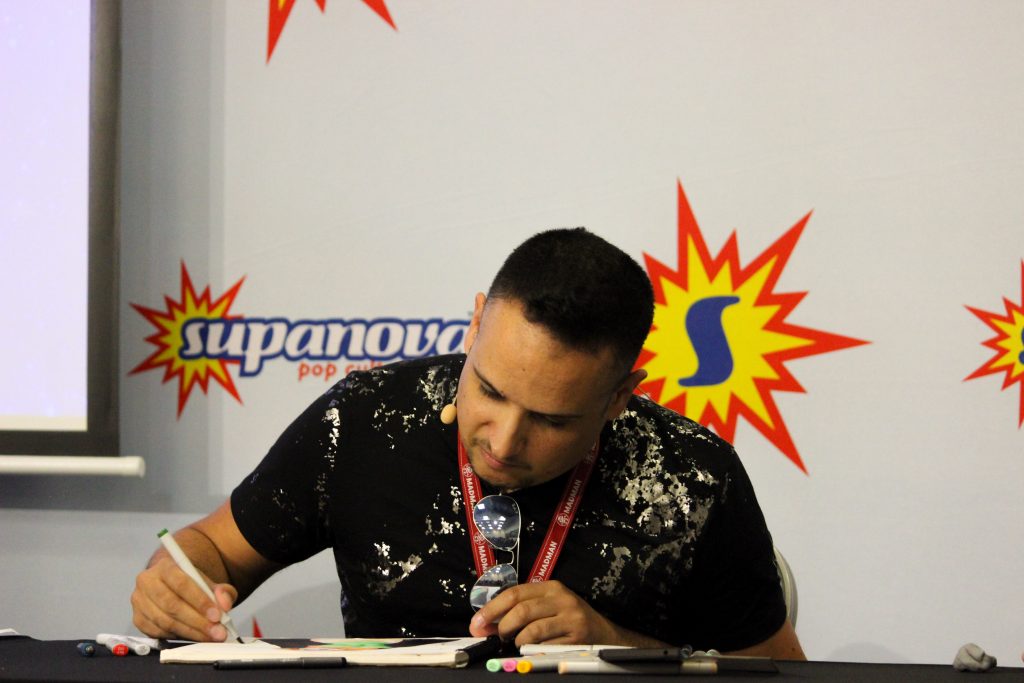 After the explanation was finished, the timer started and the three artists began to draw. While this was happening, the audience had all of that time to ask any of the three questions, with the announcer telling us that we should ask questions of the artist/s we want to lose. Not many people could choose though, so most all of the questions were directed at all three of them, with Esad giving long and comedic answers, Yardin giving shorter answers, and Finch giving quick and sharp answers so as to focus on his work. There wasn’t any bad blood or negative vibes in the room though – these three artists gave us a very entertaining panel, with their drawing being showcased via camera onto the screen behind them. I managed to snap some shots of the works in progress, with this first one being from Esad, then Yardin, then Finch. Check them out below! 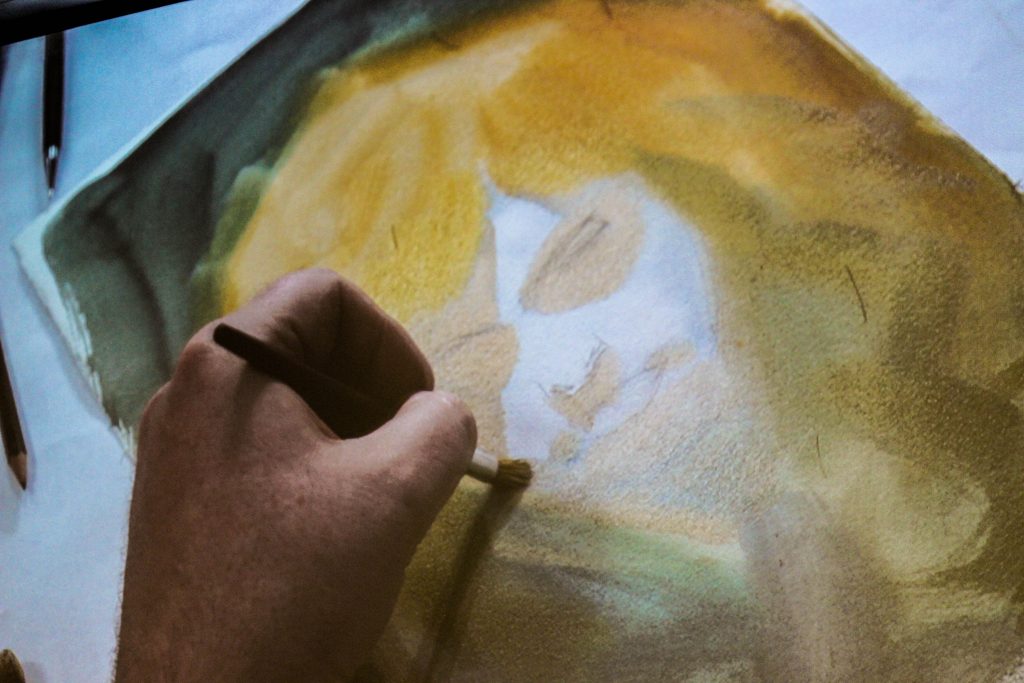 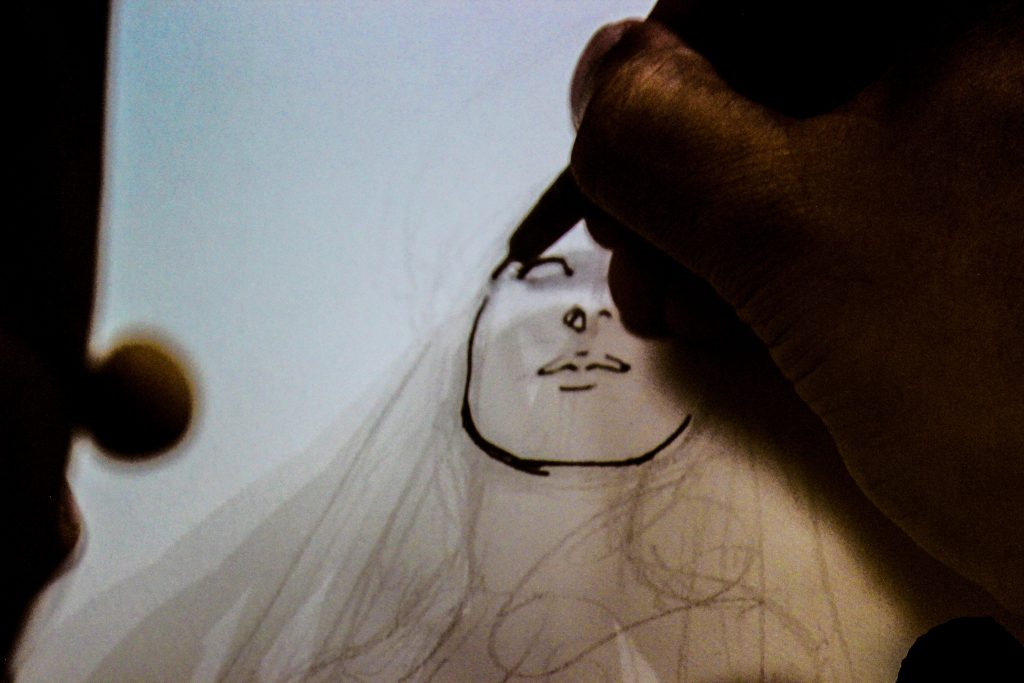 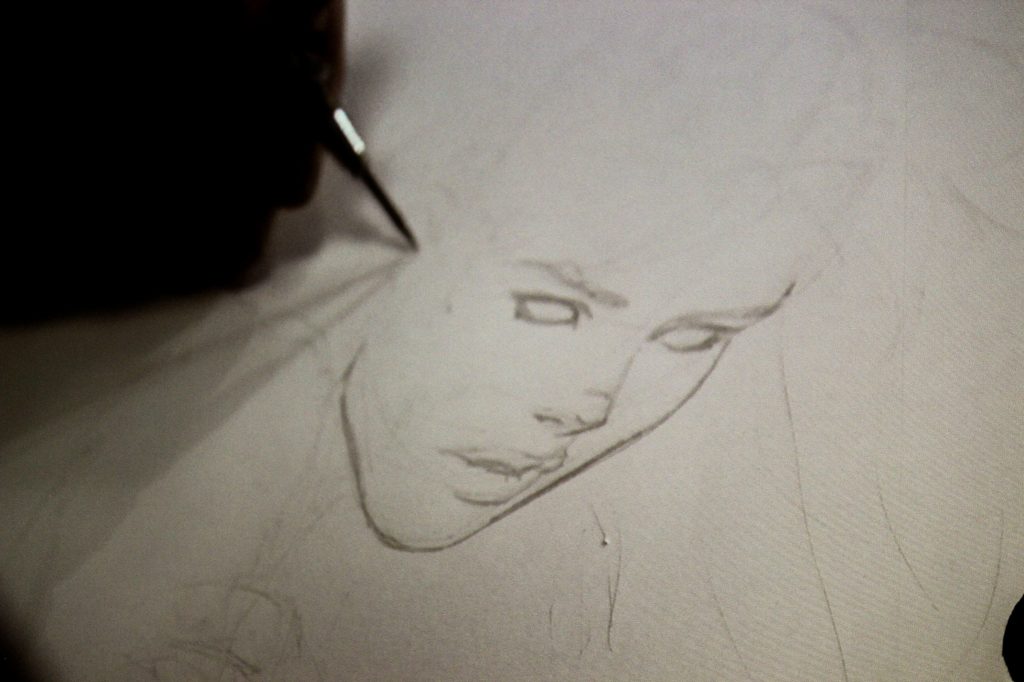 Another interesting part of seeing these artists work was their styles; within two minutes, Finch had already completed a recognizable and rough outline in pencil, whereas Esad spent a lot of time prepping his canvas, as he chooses to work in a paint medium. Yardin found the middle ground, choosing to sketch quickly and ink finally before adding colors to his work. Esad managed to finish his drawing with about five minutes to spare, and it became a short little Q&A with him while he heckled the two Davids to hurry up. But we had to choose a winner, so each of the artists held up their drawings for the room to see, which was a great photo op too. Unfortunately, the camera operator positioned himself basically in front of me while photographing Finch (damn him for doing his job, how dare he) so I missed most of that one, but I got some pretty nice shots of the other two! 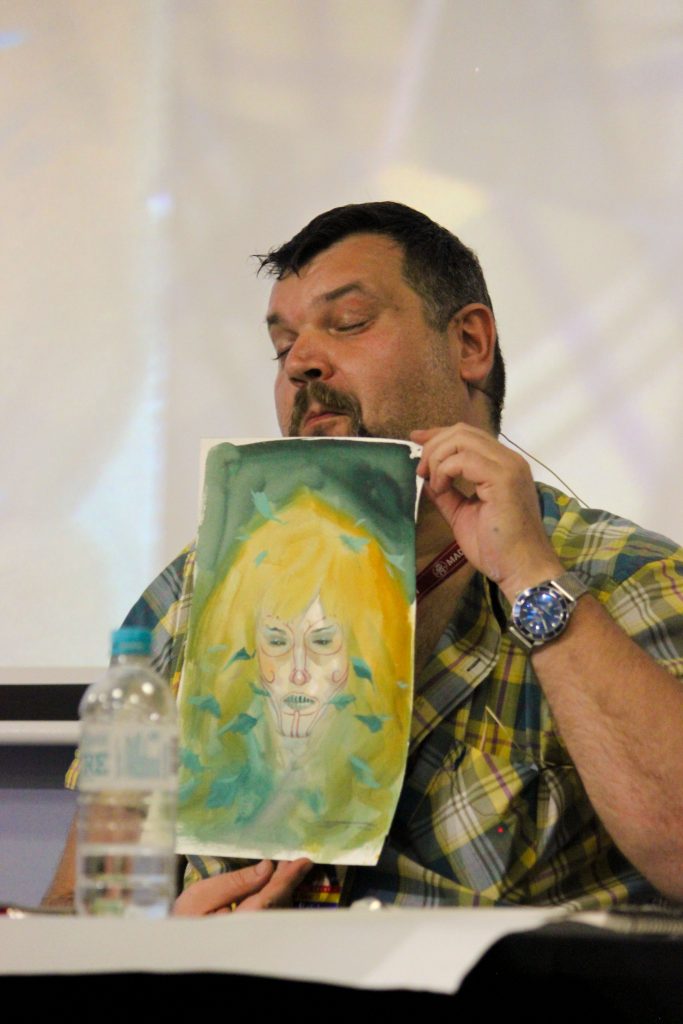 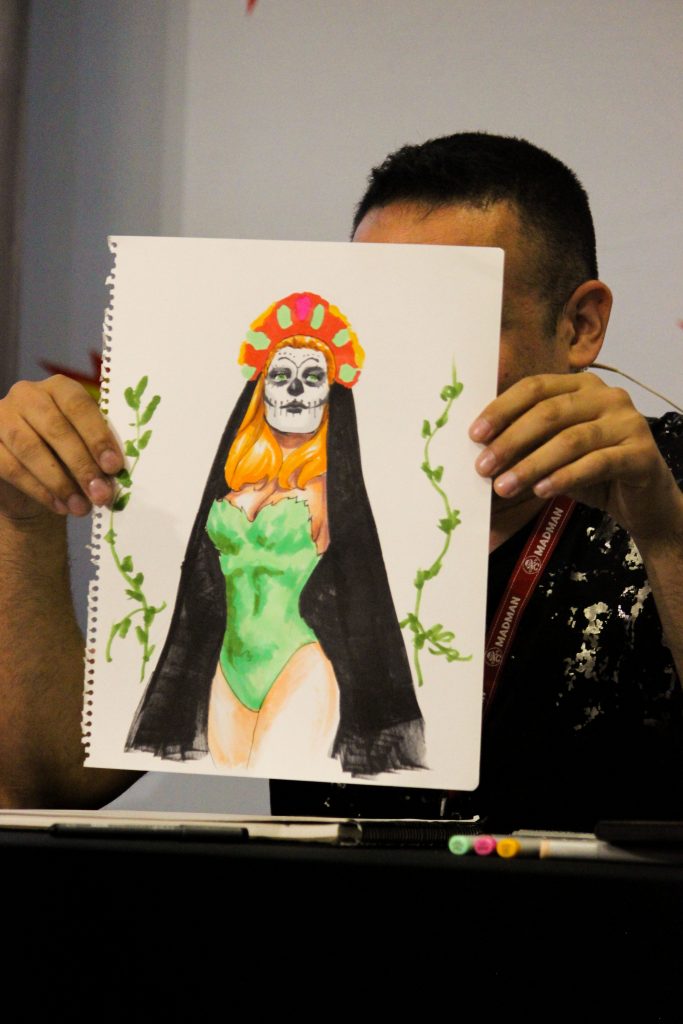 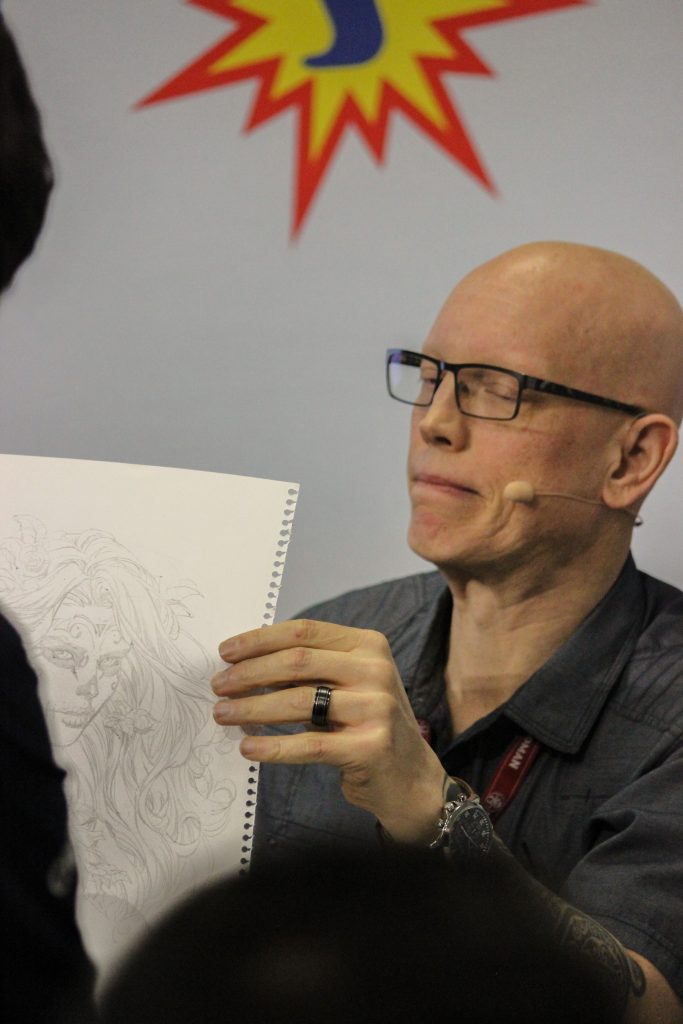 Ultimately – via applause – it was determined that David Finch had won, which was a change; the announcer told us that Yardin had been an undefeated champion for some time now. Personally, I couldn’t choose a winner – each art style was so different and unique in their own respect, with a painting, pencil sketch and inked and colored piece up on display. With this panel being some of the final moments at Supanova, it’s safe to say that it closed out the weekend with a bang and left the day on a high note. I hope to see these three incredible artists work more in the future, especially in a sketch-off environment like this! Having never been to one, I think I can say for sure that I will be going out of my way to head to these as often as they appear in the future! 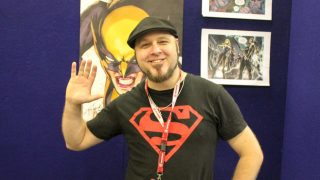 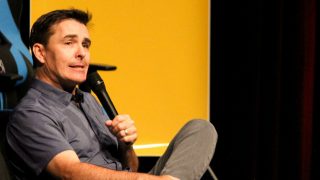