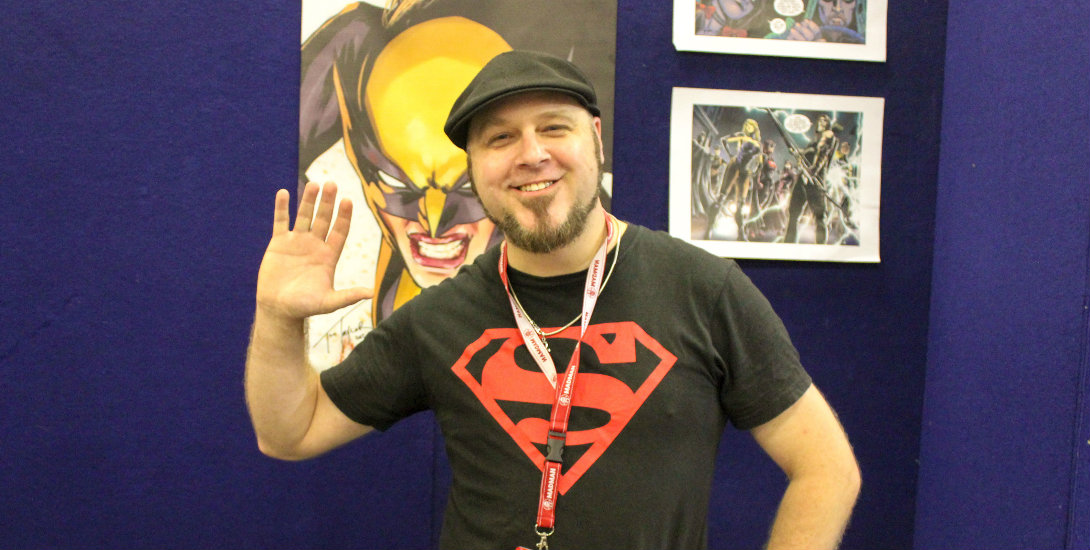 Over the weekend I had at the Gold Coast Supanova 2017, I managed to do a lot of cool things and chat to a lot of cool people, but none of these opportunities were as fun as getting to talk with Tom Taylor. For those of you who may not know exactly who he is, Tom Taylor is a Melbourne-born Australian comic book author, playwright and screenwriter, among many other things. He has won various awards for his writing, including ‘Best Dramatic Writing’ for his short play (and later comic book) The Example, ‘People’s Choice Award for Best Digital Series’ two years running for Injustice: Gods Among Us and the ‘Best New Series’ Award for his television series (based on the comic of the same name) The Deep. So with all of that backstory under your belt, let’s get to it!

Tom very generously gave some of his time on Sunday to sit and chat with me in between panels and meeting other fans, as well as signing a copy of Injustice Year One for me and taking a sweet selfie. He had previously mentioned that his favorite character to write is Harley Quinn, and this is mentioned in the interview, so just a small bit of background knowledge before heading in. Unfortunately, the audio didn’t come out as cleanly as I hoped, but never fear! I have transcribed the entire interview – yes, every word of it – for your reading pleasure! 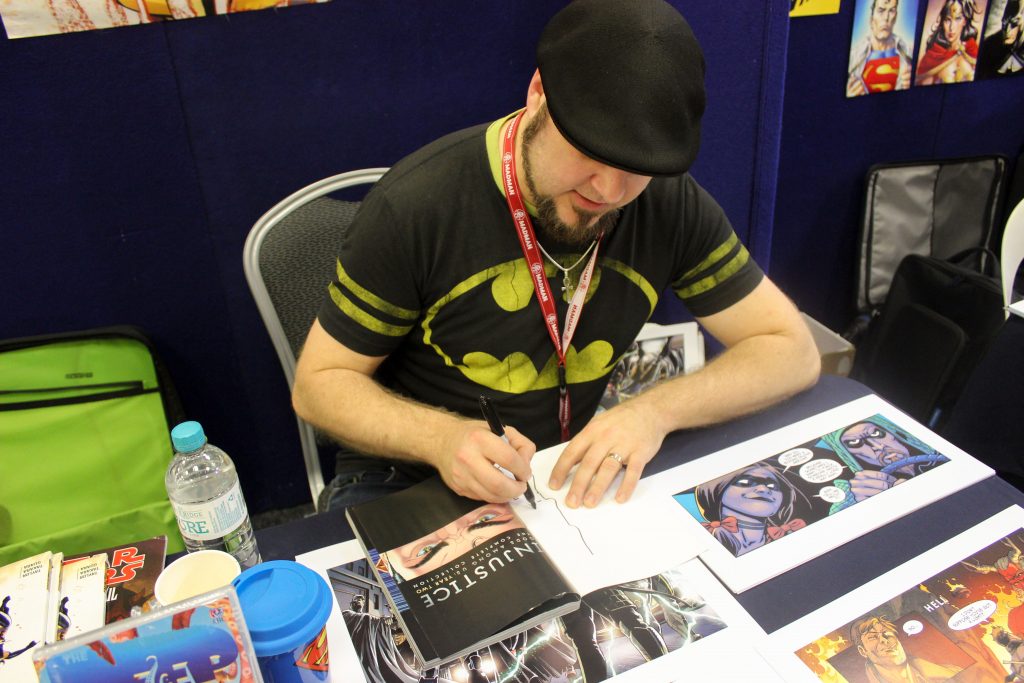 Tom: So, I guess when you’re doing a solo character, most of your focus is on that one character and how you’re gonna give them great moments and how you can really build them. Because you’ve got more pages to do that, you can tell a very, very personal story. When you’ve got a large roster, it’s kind of important that you do exactly the same thing. Just because you’ve got 45 characters, it doesn’t mean that they don’t get big moments. You need to remember that if you’ve got Katana in there, there is gonna be someone who is a massive fan of Katana even if she’s only on one page, so you’ve gotta give her a moment, you know? If you’ve got someone who’s a Killer Croc fan, you know Killer Croc has to actually have – we might only see him 6 or 7 times in the series or something – but he’s gotta have his own arc, so I try to have every character have an arc. So, there’ll be little pullbacks, like there’ll be stuff happening with small side characters and you’ll go “whaaaat,” but you’ll know that they have a life beyond the pages, and when you’re doing a big ensemble one, that’s what you do. Having said that, Wolverine’s just about to head into a big team-up with Guardians of the Galaxy, so we’ll have the Guardians of the Galaxy, we’ll have Wolverine, we’ll have Gabby, we’ve got Jonathan the actual Wolverine – and that’s suddenly a big cast, and it’s the same kind of thing. You write it like an ensemble book but you still focus – you just remember that Laura needs a big arc in the midst of this as well. With something like Justice League – Power Rangers it’s the same thing: every character gets a cool moment.

DKN: I mean it’s ridiculous – I remember when they announced Justice League – Power Rangers and I was like “what?” I never thought I would live to see the day!

DKN: Was that a bit daunting going into that? Because they’re such recognizable teams, and with them being together in a book.

Tom: Not really, because my first gig in American comics was Star Wars, so that was daunting! But now I’m kind of used to telling big characters and having the best toys in the world to play with. So it’s not that daunting, like to me it’s just: I want to make sure I tell a good story and that it’s entertaining, and if we achieve that then…yeah.

DKN: I know you’ve said it before, but your favourite character in Injustice to write is Harley.

DKN: Do you ever see yourself doing a Harley series if anything came down like that?

Tom: I mean, yeah. I’m sure I could write a Harley series. It’s something that’d be really fun! She’s got a very strong arc in Injustice 2, so she has a lot going on. She is a fairly central character in that. But I do love Injustice Harley. I like that the Joker’s gone and she’s moved on, so she can grow without that damage in her life. So, I would write a Harley series or a Harley miniseries or something for sure, but the amount I get to write her in Injustice makes me happy as well.

DKN: Since the comics are a prequel, you obviously have to make it cohesive to the current game. So, do certain characters have to die or be missing from it?

Tom: Yeah. I mean, the end of the first and the start of the second is slightly more vague than the last game and it’s not set in stone, so it’s not exactly five years. I know the status quo of what happens in Injustice 2 – I’ve read the manuscript, I read it months ago – and we work towards that, but we’ve got a bit more room to play in between, so we’re gonna tell whole rises and falls of new characters that don’t even appear in the game or aren’t even referenced in the game. So we’re gonna have a lot of fun, and we’re gonna do serious damage, and do terrible things, and then tell a joke, just like we do in Injustice. 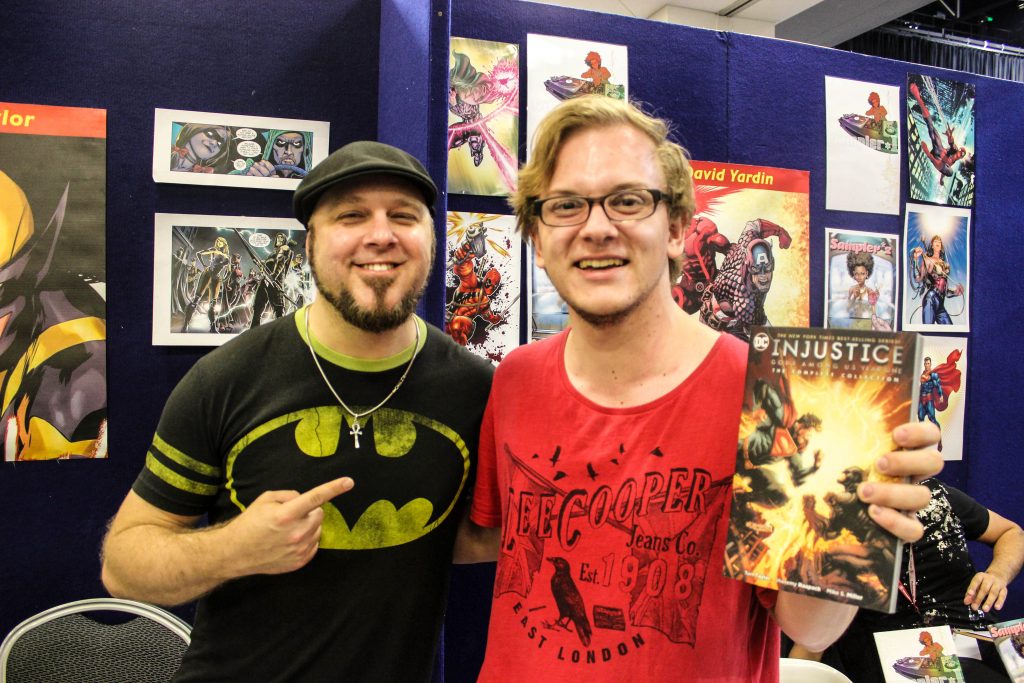 One of the most genuine and down-to-Earth people I’ve ever met, Tom Taylor truly was a delight to talk with. All of us here at Dark Knight News would like to extend the biggest thanks to him for giving so freely of his time, and I hope to catch up with him again at a con in the near future! 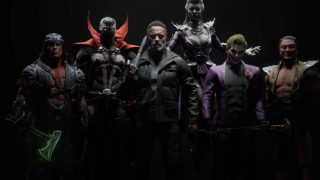 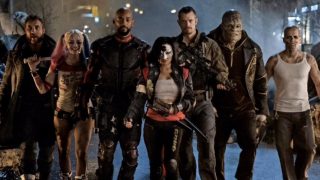