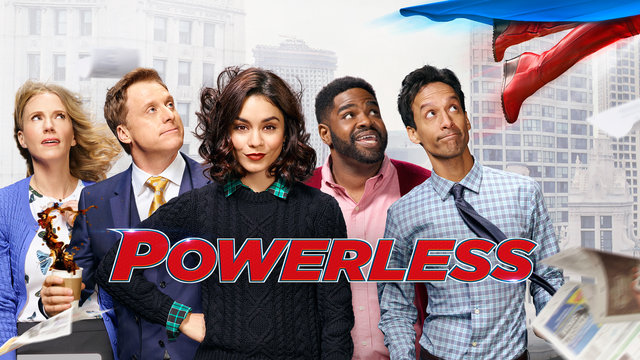 Last week, NBC announced that they were pulling Powerless from their Thursday schedule, which caused many fans, including many of the Dark Knight News staff, to fear for the future of DC’s first television sitcom.

Well, don’t panic Powerless fans, at least not yet.  Patrick Schumacker, Executive Producer, tweeted earlier this week they they are “Not officially canceled yet but thanks so much for the kind words!!!”

Not officially canceled yet but thanks so much for the kind words!!! 💪💪 https://t.co/EKkfAcEYFE

There are still two episodes remaining in the show’s first season, and with it abruptly being pulled from the lineup, combined with the show’s low ratings, many fans assumed this was the end.

“Wish you could have seen the finale.  LexCorp and President Luthor try to destroy the Earth and our guys stop them.  We really went for it in the finale.  I think we spent 5 episodes worth of our effects budget on it.”

While Powerless isn’t technically cancelled, there still has been no word regarding its remaining episodes.  Halpern notes “We hope that they air, or are at least released on Hulu.  I honestly don’t know right now, though.”

None of this bodes well for a potential second season if they can’t even get through their first season unscathed, but hopefully fans will be able to get the conclusion they deserve.  While this particular writer wasn’t very fond of the show and stopped watching after Episode 2, I can see where an audience for this show is coming from.

Dark Knight News’s own Steven J Ray is quite fond of the show, and you can read his review for the latest, and hopefully not last, episode “Van Vs. Emily: Dawn of Justice.”

What are your thoughts readers?  Are you a fan of Powerless and sad to see it go?  Or are you glad to see DC move on to focus on other properties?  Let us know!