Gotham, created by Bruno Heller, is one of the most enticing and beloved TV dramas of  the year. It has won a Critics’ Choice Television Award for Most Exciting New Series, and each season keeps upping the game. It is a genius series because of its breathtaking cinematography and its brilliant cast and script. Their hooks are different from regular crime dramas because it takes the familiarity of the story and places it in a different point of view. It has an epic list of Batman villains. They connect us to the characters that we already love and fear, and give us new meanings to their identities. Gotham city has only been depicted a handful of times in film, and Gotham takes the gray and dark elements of the worn out city and applies it beautifully. Season three will resume on April 24th, 2017.

David Mazouz plays a young Bruce Wayne who has our hearts. DKN was honoured to spend some time with the young star of the series, delving into the details of what exactly it means to play our favourite Bat. In addition, during the Q&A panel, DKN was able to ask the gracious Sean Pertwee, who plays one of the most important superheroes in the DC Universe, Alfred Pennyworth, a question as well. Mr. Pertwee is so dashing to listen to! 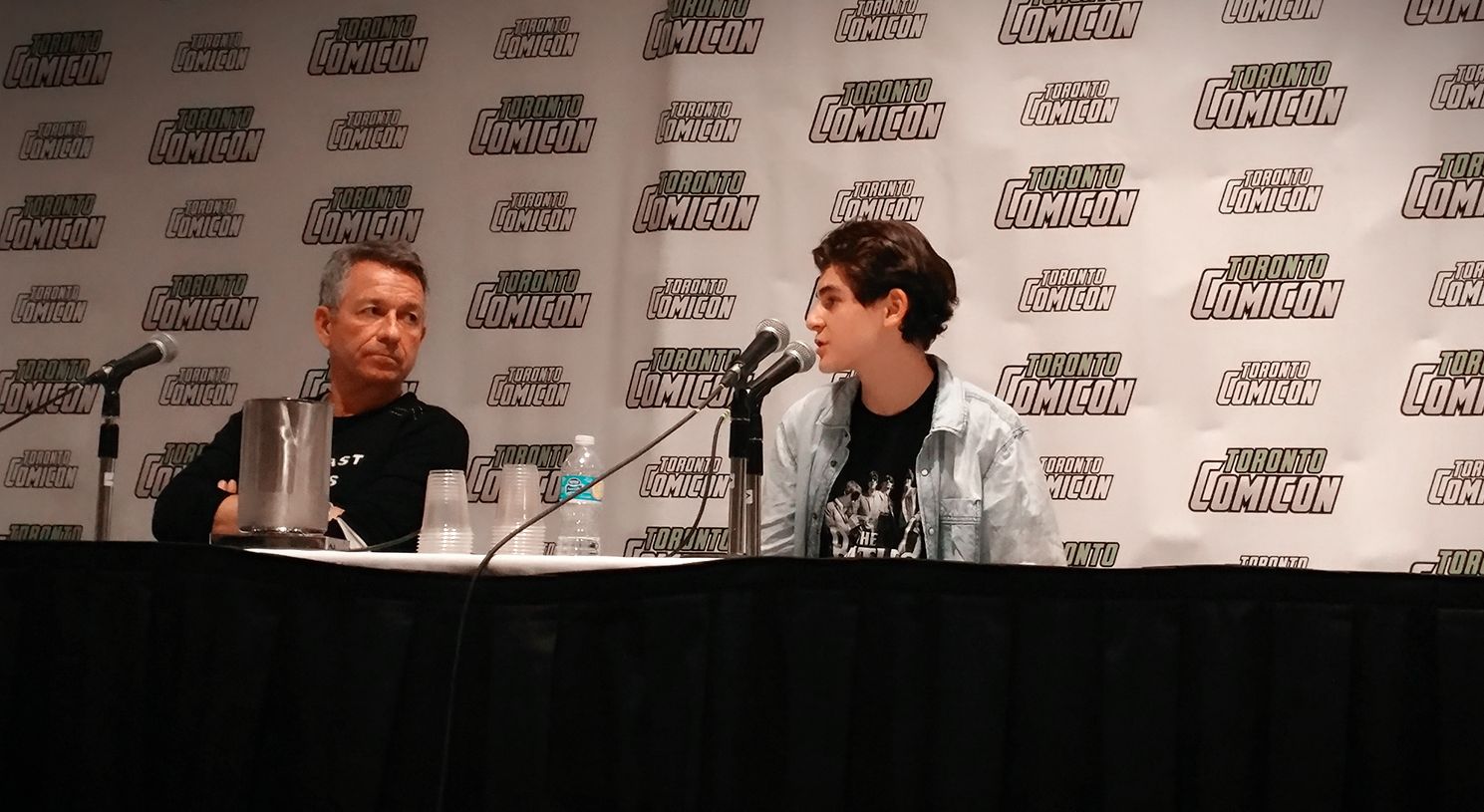 Dark Knight News: What model of Alfred and Bruce Wayne do you two try and follow from the comics or TV?

Sean: It was a really interesting process because like I said earlier on, we didn’t know what we were auditioning for. My audition’s speech piece was a generic page about a guy walking into a pub and smashing someone in the larynx. And I asked “Well what’s this about?” and eventually I was called down. I was doing a show called Elementary, and I saw Danny Cannon, who I’ve done a couple of movies with in the past, and Bruno Heller.

And I said “what are you doing here?”

And they went, “that’s Alfred.”

What they were doing was that they wrote these generic pieces [and] they were cherry-picking enemies of our characters. Because we are preceding anything that’s been seen before, they wanted to see elements of their interpretation, or in fact, our interpretation. They wanted to see their natural progression. We know where these characters end up, but we don’t know how they get there. And so the thing was, they wanted to give Alfred – my Alfred – like a real sort of sense of history. Why would the richest man in the world have to instead of [be] coddling to the richest child in the world, his greatest legacy, the most important thing of his life? And that’s the questions they ask themselves.

So in answer to your question, we know where they end up so we weren’t following the canon per se. And I think that a lot of fans were really freaked out when they first saw our interpretation.

DKN: Bruce Wayne, if you ever met Clark Kent at your age, would you two be close friends?

David: Yeah, I think they’d be best friends! Yeah! In Batman v Superman, they played Gotham and Metropolis as twin cities like San Francisco and Oakland, so I don’t understand why Clark Kent can’t take a boat ride across the bay and come to Gotham for an episode.

David Mazouz has heart of gold! Thank you to Toronto Comic Con, and of course the actor himself. DKN was once again greatly humbled by the chance to interview him. He was such a pleasure to meet, as well as extremely kindhearted and sweet to the fans. He certainly carried the young Bruce Wayne charm and smile.

DKN: What Batman story would you want to see adapted in Gotham?

David: Oh, that’s a great question. I mean obviously no Batman story straight from the books could be adapted because obviously there is no Batman, but a story-esque… ooh that’s tough.

[He took a while to think about this one, he seemed adorably stumped.]

David: This is really tough.

[He said again, with a laugh. It is apparent that he loves Batman, and so he couldn’t decide what story he would want to adapt. We rearranged the question asking which top three story arcs would he like to see. This aided his decision.]

David: In no particular order: Hush, Death in the Family, and I would say The Killing Joke.

DKN: What Batman skill would you like to learn or display in the next Gotham season, if you had the chance, and if not what are some of your favourite tactics he has?

DKN: Aside from the age of your character, what makes your Bruce different? Versus, for example Michael Keaton’s version, or Batfleck’s version?

David: I think one of the constant things is that, this might have to do with his age, but it’s not just the mere fact that he’s younger. I think that one of the things that makes Bruce from Gotham different from any other of “The Batman” is that he is really trying to figure himself out. There is a constant theme in his story-line, especially in season three, and especially towards the end, he is trying to figure out who he is and where he belongs and what his greater purpose in Gotham is. Whereas if you’re like Batman, just by the virtue of being Batman, has already made his decision, already knows his purpose. Whereas Bruce in Gotham is trying to discover his.

DKN: What is it like to play a character that has never been on television screen before?

David: Ah, it’s great! I mean, it really gives you license to have a little bit more freedom to not have to follow the canon.

And concluding the interview, reporting from Dark Knight News, we asked the young Mr. Wayne what he thinks of the Bat-Vigilante of Gotham?