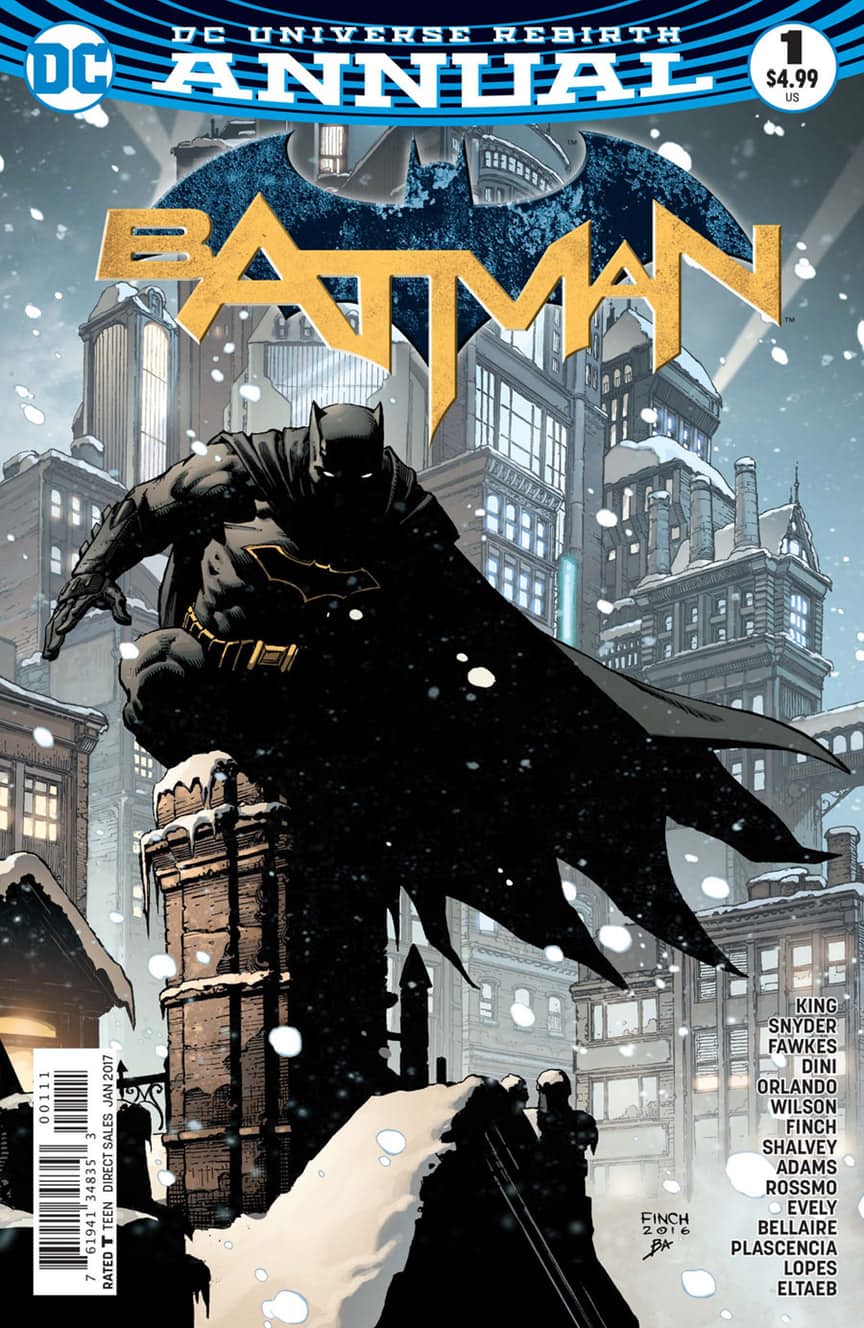 The annual is a collection of holiday-themed short stories, which are a mixed bag of quality. In order to properly showcase each story, this article will be a series of mini-reviews.

Here we are presented with the newly revamped secret origin of Ace the Bat-Hound, whom has not been seen in proper continuity since Batman, Inc. If “Good Boy” is part of the Rebirth initiative to bring back some of the more Silver Age elements of Batman, then it worked: it is my favorite story of the annual. The only thing that holds it back is that is Finch’s art. It is too dark and gory for a feel-good Christmas story. It is inappropriate for the tone that King is going for. Still, it is an enjoyable story that introduces Ace into the modern Batman comics and hopefully adds another long-running supporting cast member. 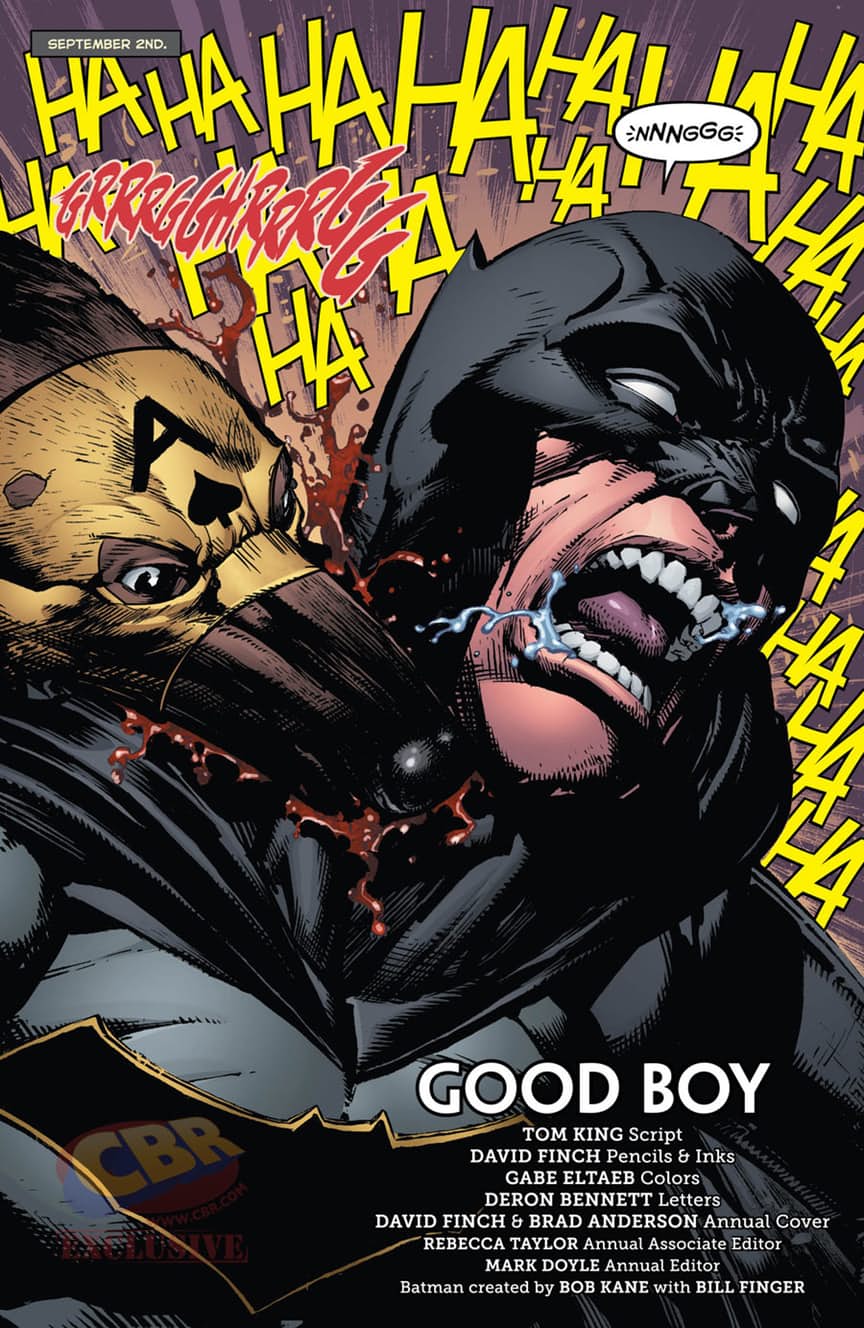 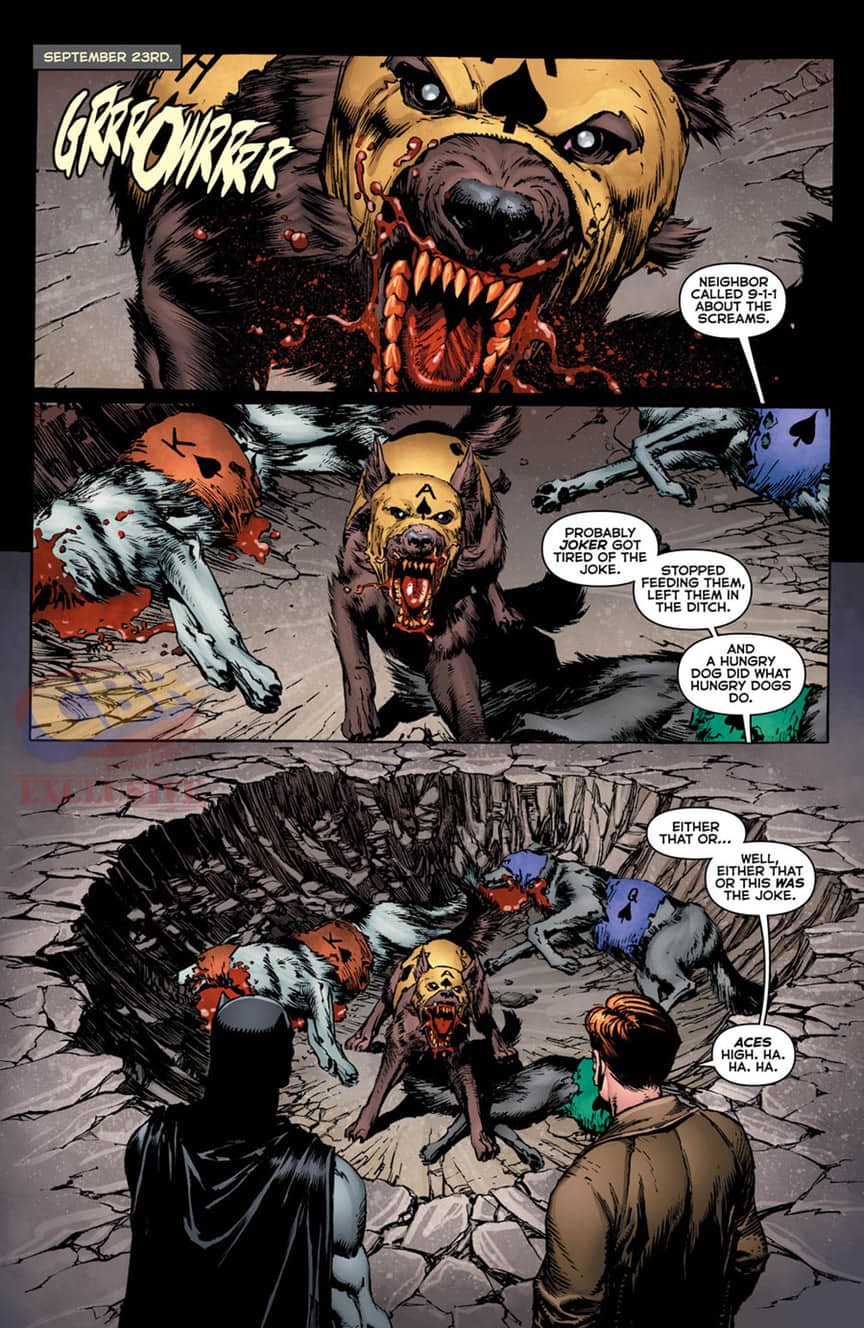 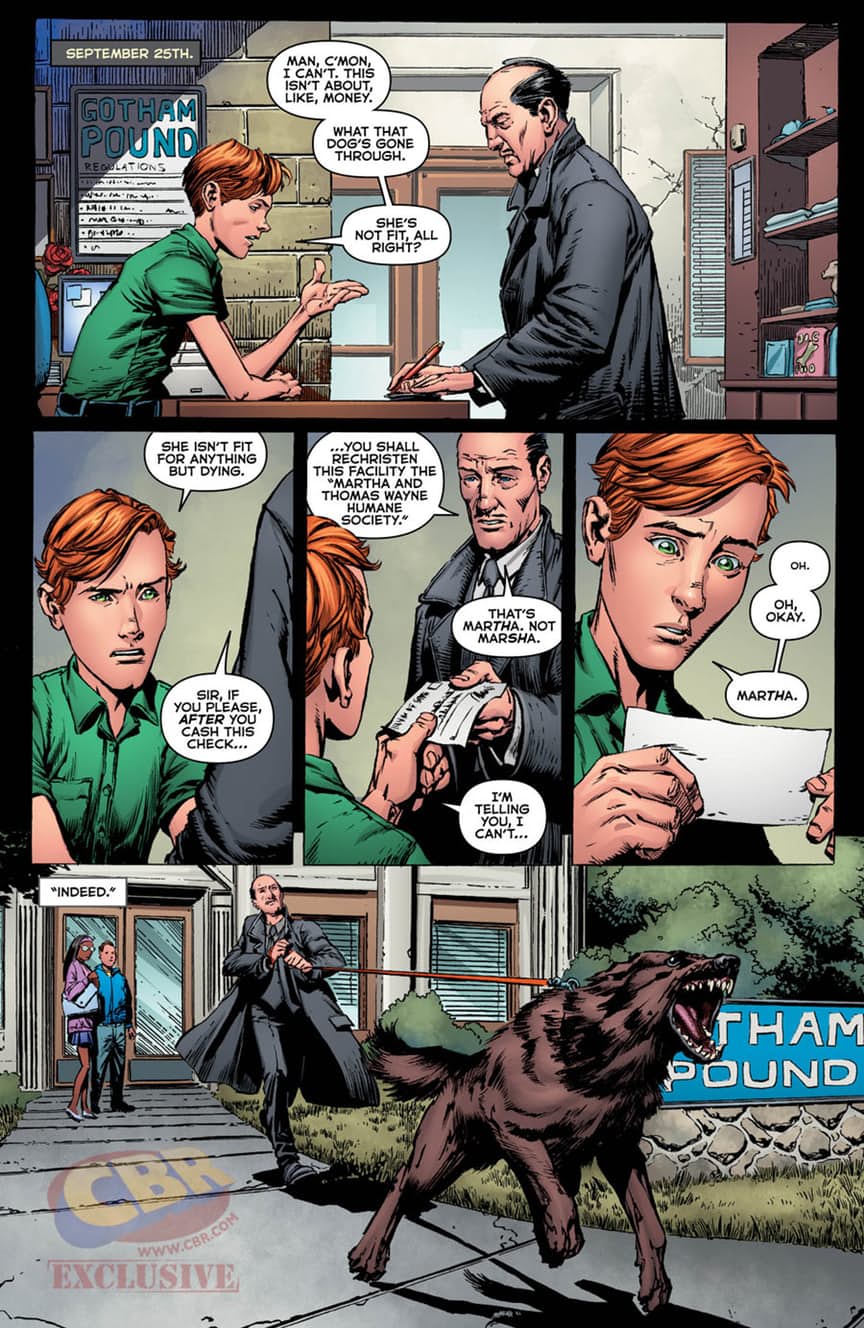 This Christmas short is Batman testing out a new crime tracker gadget during the holidays. This has the makings of a Scott Snyder Batman story, complete with a revamped Bat-trope and a subversive twist. Shalvey’s art works beautifully here and may actually be the best art of the annual. It is clean and warm, while making the Batman fighting scenes look super cool. It is an inconsequential story that is cliche, but one that does a great job highlighting both Batman’s over-the-top superhero persona and his softer, emotional side too.

“The Not So Silent Night of Harley Quinn”

Whenever Dini pens his most popular creation, Harley Quinn, we are always in for a treat. And this short was definitely a treat. It is a funny and whimsical tale of Batman busting Harley and then awkwardly driving her back in the Batmobile. The tone is likened to one of the more humorous episodes of Batman: The Animated Series. Here, Batman is more light-hearted, but still played as the straight man for Harley’s antics. The only missing is if the art was done by BTAS’ art director Bruce Timm. Nothing against the living legend Neal Adams’ energetic art, but Dini’s wacky script needs a more cartoony style to elevate it. Another minor problem is that the moral of the story is that people should act more like Harley? This leads to a somewhat confusing sequence that seems to promote Harley’s brand of violence. Regardless of questionable morals, it is still always a pleasure to see Dini reunited with Harley and Adams penciling Batman again.

Now this story is a bit bizarre. It starts out as a typical cheerful Christmas story, but then takes a very sharp 180 into something much darker. The surprise ending was such a shocker that it feels more like tonal whiplash than a naturally set-up twist. One would think that a story about how Batman feels when faced with another philanthropist who is more generous than Bruce Wayne is would be ripe material for a holiday-themed annual. And initially it does feel like a normal holiday plot of Batman versus a villain trying to ruin Christmas. But then it secretly sets up future stories and villains. I will commend Orlando and Rossmo for creating an effective short that is a launchpad for potentially interesting ideas in future plots, but one cannot help but feel that it is a tad out of place in an annual full of innocuous Christmas stories.

This tale gets the egregious award for being the least favorite of the annual. A new villain named Haunter uses a low-grade form of Scarecrow’s fear gas as a cover to escape from Arkham and Batman is right on her tail. The crazy thing is that the plot is not even that bad, but it is obvious that Wilson wanted to tell a bigger tale and then ran out of space to do it. Hence, the entire thing feels like a series of truncated-and occasionally confusing-events with an ending that is very abrupt. Also, Christmas has very little bearing on the plot, making it the odd story out in an annual full of holiday stories. Wilson and Evely’s potentially interesting tale was unfortunately cut too short and would have been better served as a full issue instead of a six pager.