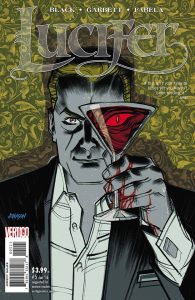 This is the issue of payoffs. We finally get some answers as to who (supposedly) murdered God and the subplot involving Medjine and Azazel comes to a head.

The former provides much more intrigue as the interpersonal relationships between Lucifer and the rest of the angels are the clear highlight of this book, at least for me. The stuff involving Medjine doesn’t really enthrall me and the bit with Azazel was brought to a rather abrupt end, especially for something that had been set up for months.

I guess you could say the Medjine subplot interested me about as much as the murder cases Lucifer investigates on the TV series. Granted this is a much different beast, but what the TV show and comic book both have in common is that they’re far more entertaining when the focus is placed on Lucifer and his brethren. On that note, this may be the best issue yet when it comes to writing for the character of Lucifer.

There is a pretty cool cliffhanger that sets up where the series is going next. I really like how it builds upon its biblical foundation and takes it somewhere unexpected. Being a big fan of Supernatural, that’s a quality I can really appreciate. 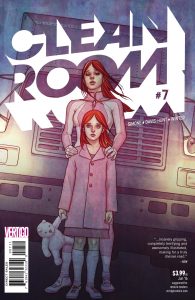 I believe this issue of Clean Room kicks off a new story arc and, as such, is new reader friendly for the most part. You may feel a bit confused by some of the concepts, but being someone who has read only one issue prior to this, I found myself able to thoroughly enjoy my reading experience.

This is a refreshingly addictive science fiction tale that contains dialogue as only Gail Simone can deliver. Not only that, Jon Davis-Hunt has a real knack for creating disturbing imagery.

Adorn your tin foil hat and get ready to scream – assuming anyone will hear you.

Also available from Vertigo this week: