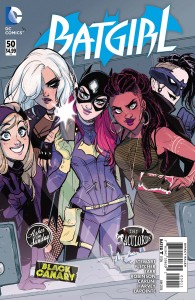 This is it: the end of Stewart, Fletcher, and Tarr’s Batgirl of Burnside era. It took Barbara Gordon in a bold new direction and was met was mostly praise from comic book fans. Plus, it gave her some new threads that inspired countless cosplayers – I have witnessed some great efforts firsthand.

The cover art not only hearkens back to the first installment of this creative team’s run, but also finds itself populated by supporting heroes that play a vital role in this oversized anniversary issue: Black Canary, Bluebird, Spoiler, and Operator. Fugue also rounds up a number of villains established in previous issues, illustrating how this team did a commendable job of giving Batgirl her own contemporaries rather than recycling Batman’s standard foes.

Babs Tarr is joined by Harley Quinn’s John Timms and a handful of other artists to present such beautiful mayhem. The images contained within have an anime quality. I say anime, not manga, because some of those panels really move.

The battles between heroes and villains are fun to take in and don’t feel forced despite this not being an outright team-up book. Although the final encounter between Batgirl and Fugue sees her outsmart the bad guy and make some inspiring physical efforts, it felt like it wrapped up a little too quickly.

As an added bonus, there are a few pieces of gorgeous pinup art that you would hope to find included in an issue such as this.

In short, Batgirl #50 is a fun, action-packed ride that delivers a satisfying conclusion to a definitive run. I just felt it could have used a little more meat, so to speak.

Beyond The Bat: Artist Steve Pugh Joins Writer Mark Russell on ‘The Flintstones’