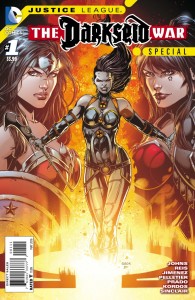 Yes, we have been waiting awhile for another chapter of “Darkseid War,” the concluding arc of Geoff Johns’ storied run on Justice League. Although some fans may not give this one-shot a second look, I urge you to pick it up because it actually is a crucial part of the story. Plus, you did notice Geoff Johns worked on it, right? Just making sure.

Aside from cover art, Jason Fabok is nowhere to be found, but that’s expected as he is working on the series proper. To fill the void, DC enlisted some juggernauts in the form of Ivan Reis, Joe Prado, Paul Pelletier, and more to provide sufficient eye candy during a dark day for the DCU.

Although this book does take place in the present, it consists mostly of flashbacks focusing on Grail, daughter of Darkseid. It’s within these pages that her background is detailed like never before. Yes, the girl is pretty damn evil, but we learn that she has somewhat of a heart. Speaking of which, she does something to a character whose name I won’t divulge in the present that looks to have some major ramifications going forward. I’m not sure I know what to make of it, so I guess I will keep enjoying the ride.

Another thread the series proper hasn’t had time to fully explore is what’s going on with Jessica Cruz. We gain more insight into Power Ring’s, um, ring in such a way that it makes me recall Johns’ days on Green Lantern. The man’s imagination is truly a well that never runs dry.

As I said earlier, this one-shot is quite the essential read for anyone who has Justice League on their pull list. Sure, it’s not quite the powerhouse that recent issues have been, but JL has set a pretty freaking high bar in recent memory. This leads directly into Justice League #49, so be sure to come back in a matter of weeks when we discuss what happens next.