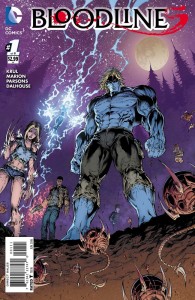 DC has certainly launched its share of mini-series in 2016, most of which have been very good. The latest book to join the slate is that of Bloodlines, which is kind of a superhero/horror/sci-fi genre mashup. I admittedly wasn’t too interested going in, but now I’m glad this book came across my desk. It’s a gem some may overlook, so perhaps my review will persuade you to give it a closer look.

J.T. Krul, who has been at DC for some time now, pens some believable, modern dialogue that is delivered by characters who feel entirely authentic. This book, despite having a rather fantastical feel, boasts real world sensibilities. It’s very easy to get drawn in.

V. Ken Marion offers some highly exquisite artwork that kind of reminds me of Brett Booth’s – but Andrew Dalhouse’s colors likely play a part in that. Still, you have to admit those are some fierce pencils. Do keep an eye on this guy because I could see him drawing something like Teen Titans in the future.

As for the story, this seems to be the long and short of it, at least for now: meteors descend on a small town that affect the DNA of organic beings, mutating them. Eddie, a young man who is physically disabled, is pretty much our main character to follow as we learn the ins and outs of this hamlet.

Just as we grow accustomed to this world, we venture to a kegger with him that gets crashed by a mutated deer. Eddie unexpectedly Hulks out to save the day, effectively neutralizing the threat. By no means will I spoil the final page, but I will say this issue served as great setup to a deepening mystery. I feel as though you should look to the cover art for some hints as to where this book may go.

Yes, this story takes place within the DC Universe and is somewhat of a callback to a story from the 1990’s, but to be quite honest, it feels like a marriage of Vertigo and Wildstorm, which should excite some readers. Seeing as how this is a six-issue mini-series, it shouldn’t be seen as much of a gamble and I urge my readers to give it a shot.

DC All Access: Inside ‘Justice League vs. Teen Titans’ & Wonder Woman: Earth One