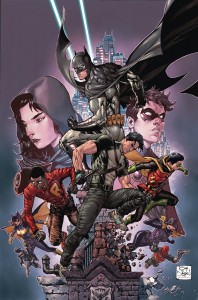 Batman & Robin Eternal #26 ends the run in spectacular fashion. This has been a weekly epic building up for 6 months, and it doesn’t disappoint. The issue starts with a really nice flashback of Harper Row and her mother, which should quickly change your opinion of Mrs. Row considering the last time we saw her, besides getting killed, she was stealing with her husband. She exchanges kind words with a much younger Harper, which resonate within the overall story. We hit the time machine on the next page and pick up right where we left off last week: will Harper kill Cass for Mother while Dick is standing by? Spoiler alert: no… and that shouldn’t surprise you. In a way, the big showdown goes as you’d expect. The good guys take down the bad in one big fight without many casualties. We then travel to the future in Gotham (post Batman #50) where Batman is on patrol, and meets up with Harper in the Gotham cemetery. There’s a nice chat here that hints we are far from seeing the last of Bluebird. The issue then ends with all of the Robins setting off to take down a threat.

The finale seemed a bit run-of-the-mill, yet was very pleasing. Our heroes ganged up to take down the global threat and none of the good guys died. Two particular standouts were Harper and Cass, who stepped up to defy Mother and help one another. Dick wasn’t just a stand-in, but didn’t have to do much here. The part that did bother me was the excessive amount of characters who weren’t needed… at all. Sure, they (Batgirl, Catwoman, Midnighter, Damian) joined in over the past few issues, but didn’t serve too much of a purpose other than to imply how this threat concerned the whole world. To me? Meh.

I really enjoyed this Eternal story. It started out as a Dick Grayson tale but evolved into a Harper Row one. At first, I wasn’t okay with that, but the writers here developed her character well, especially in her relationship with Cass. The flashbacks were also stellar, and by far, my favorite part of the story. Of course, seeing Bruce behind the cowl is always going to be my favorite part. There were some issues that I don’t care to read again, but the majority serves a purpose and are pretty exciting.

When Batman: Eternal ended, we were quickly teased that the title would continue with Batman & Robin. But as of this writing, we haven’t heard anything. Oh well, hope springs eternal.