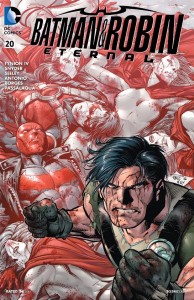 Batman & Robin Eternal #20 picks up right where last issue left off. We are thrown right into the campus of St. Hadrian’s where all of the students are hell bent on destroying the adults, courtesy of Mother. Our heroes (Dick, Harper, Tim, Jason, Cass, Helena) are caught in the middle, trying to shut down the generator spreading the signal while also dodging assassins. It’s a tense issue with some brutal fighting throughout.

Writer Tim Seeley steps in again this week to get us through this vicious event without it seeming too quick, or overstaying its welcome. A few of our heroes, Harper and Tim, are really feeling the effects with Harper coming off a major revelation last issue (Cass killed her mom). We get a great point of view from Harper as she continually goes after Cass, who is heartbroken and doesn’t understand.

Meanwhile, Dick and Helena go off on their own little fights, which doesn’t go so well for them. Let’s just say in the end, Mother is watching and gets what she wants: access to a dangerous satellite. Luckily, Tim takes down the generators which turns all of the students back to normal, and all is well again. Sort of. Dick catches up with Helena, who reveals the purpose behind the satellite and how it relates to Nightwing. All of this, before the Son of Batman returns (ugh).

A decent issue with plenty of action. I’ve already applauded Seeley for some nice pacing, dialogue and action written in the issue. This week’s artist team of Roge Antonio and Geraldo Borges do a nice job with their doodles. Nothing negative to say, but nothing necessarily stands out.

Overall, a decent issue that escalates the story a little more. The team has stopped one threat while Mother has access to another, only pushing us closer to what should be an epic reunion.

What You Need to Know About DC’s ‘Rebirth’