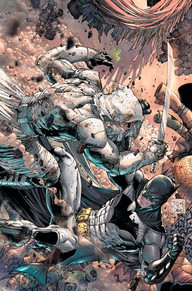 Following a wonderful issue last week, Batman & Robin Eternal #18 packs an emotional punch.  We are thrown right back in the middle of the gang figuring out Mother’s master plan, which results in a virus affecting the world’s youths. Mixed in as always (and the strongest part of the run) is another revealing flashback sequence, where the Dark Knight takes down Orphan but is a witness to a live stream of a murder, before Mother (supposedly) dies from a cyanide cap.

Issue #18 is awesome, and on a different level than strong issues that came before it. We get a lot of emotion this week. While the gang works together to analyze this virus, Harper Row is downstairs getting quite a tale from Orphan. This could have been done in just one, uninterrupted moment, but the Eternal team splits it up and spreads it throughout the issue. This had much more of an impact on me as a reader and I’m so glad they took the different approach in storytelling. Mixed with this revelation is a flashback where Batman sees the event play out right before his eyes.

Upon its debut issue, Batman & Robin Eternal seemed as if it was exploring the relationship of the Dynamic Duo, to which it has. However, we are now seeing there may have been plans to have someone else behind the Robin mask. I feel like the title is turning into a Bruce/Dick/Harper triangle which I am now open too. I credit that to the storytellers Scott Snyder and James Tynion IV, this week’s scripter Ed Brisson, and the fabulous art (again) from Scot Eaton and Wayne Faucher.

Honorable mention: What an awesome cover from the talented Tony Daniel.