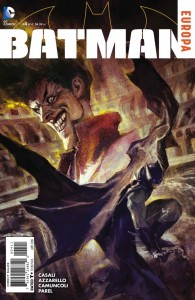 The concluding chapter of Batman: Europa finally arrived in comic shops this week and completely surpassed my expectations. While no issue in the mini-series was bad, some were better than others, so I wasn’t quite sure if the finale would meet my standards. I’m glad that all involved put forward their best effort and delivered something that many Batfans will be happy to add to their shelves once it’s collected into a trade paperback.

The writing team of Matteo Casali and Brian Azzarello once again proves it really has a handle on writing for the characters involved as evidenced by page after page of pitch perfect dialogue. All of that is only strengthened by Gerald Parel’s striking artwork, which I think is the best this mini-series has seen since its first issue, maybe even THE best. Considering Jim Lee contributed to the first issue, that’s really saying something.

This issue’s opening pages depict both Batman and Joker bloody and beaten coupled with some great internal monologue from our dear Dark Knight. I felt various aspects of these pages hearkened back to elements from The Dark Knight Returns, The Killing Joke, and Arkham Asylum. Perhaps it was unintentional, but this longtime Batfan enjoyed every bit of it.

The big bad that the unlikely team of Batman and Joker have chasing is indeed finally revealed – it’s a familiar Batman villain, but trust me, none of us saw it coming. You will see the cunning and sheer brutality of the villain in question on full display, making for a visceral boss fight.

Not to get too sidetracked, but one of the best Batman quotes I’ve read in some time is contained within these pages: “The blow to the temple staggers [redacted], and breaks a knuckle. Luckily I have nine more.” Let’s just say you will feel every ounce of Batman’s rage during the big duke-a-roo.

I would have to say this will perhaps go down as one of the most definitive looks at the Batman/Joker dynamic. It thoroughly examines how one can’t exist without the other without feeling like it’s treading familiar water.

Up until this issue, I wasn’t quite sure if Europa was worth the long wait. Now I can say it was.