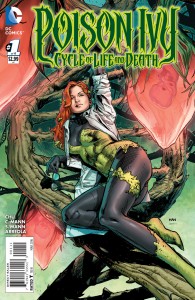 While iconic characters like Wonder Woman and Supergirl will always have their dedicated fan bases, it’s important not to forget the bad girls also have their followings. Catwoman has enjoyed being spotlighted in her own solo title for over two decades and Harley Quinn has experienced much success in the past few years. It only makes sense that DC would take a crack at Poison Ivy, considering her faithfuls have been clamoring for her to be featured in a book of her own.

Amy Chu and Clay Mann happen to be the creative team tasked with making Ivy the focus of a new mini-series and have done a fine job of it. While I remain indifferent about sympathizing for a villain, Chu does a commendable job of showing how multi-layered the character is in this introspective offering. Mann’s artwork complements the narrative with top notch, extremely detailed renderings.

After recovering an ancient plant in Africa, Ivy somehow lands a job at Gotham Botanical Gardens. Am I the only one who finds it odd that one of Gotham’s most notorious criminals can land such a respectable position? The Gotham Academy kids make a cameo, as they are visiting on a field trip. It was kind of interesting to see them drawn in a more realistic fashion as opposed to the manga style that we are used to seeing in their respective title.

It’s worth mentioning that Ivy’s best friend, Harley Quinn, stops by for a bit to lighten up things. Ivy’s offhanded comments seemingly alienate Harley, which I suspect to be a temporary thing. I figure it’s a decent way to make sure the remaining issues make Pam the focus as opposed to some of Gotham’s other femme fatales.

So if you’re a Poison Ivy fan and wish to see her eventually get an ongoing series, you should probably pick up this mini-series as I can only assume that DC is testing the water. It looks like there may be a growing mystery afoot, so there is probably much intrigue to be had over the course of the next few months.