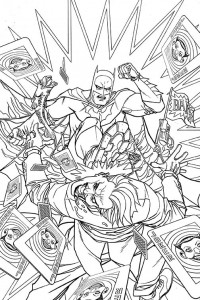 While many fans haven’t taken to the “Superheavy” story arc – and I’m right there with you – I can say with confidence that many a Batfan will enjoy this issue. We are very close to seeing Bruce Wayne once again take up cape and cowl as Batman, and this issue packs quite the punch.

First, let’s talk about what everyone has been waiting to see this month: the park bench (words I thought I’d never type). Perhaps it’s only Scott Snyder and Greg Capullo who are able to make a park bench exciting, but they have the good fortune of playing with an amnesiac pair in Bruce Wayne and The Joker.

The conversation that takes place between the former rivals is undeniably great stuff. The words exchanged between the two are some that you may not expected to hear. All the while, you may be asking yourself if Joker truly remembers anything before the Endgame finale and if he can lead a good life now. Sure, it’s only a matter of time before he goes off the deep end again, but let’s enjoy the ride. I’m looking forward to seeing whichever writer will get to explore that.

Said meeting in the park is intercut with a battle between Jim Gordon and Mr. Bloom, who publicly outs the former police commissioner as Batman. As much as I don’t care for the Bloom character, he is very well written in this issue.

Although those scenes provided more entertainment than expected and very nearly lit a fire under Bruce’s ass in a literal sense, I stress the real show here are the Bruce/Joker scenes. The final page, which I won’t spoil, will simultaneously make you cheer for Bruce and feel Alfred’s heartbreak. It’s quite powerful.

Before we part ways, I would like to mention that the copy I reviewed was part of the adult coloring book variant cover initiative. If you bought this cover and colored it in, feel free to share your artistic stylings with us on our Facebook and Twitter pages, which are linked below.