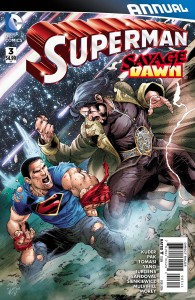 It’s kind of hard to sum up what this particular Annual aims to accomplish. While recent issues of Action Comics and Superman were hinting towards it, it actually serves as setup for upcoming Superman stories. I know it sounds confusing, but I will affirm that it was a pretty satisfying read.

You probably noticed this oversized issue is handled by a number of creators, yet it works for the most part. The current crop of Superman writers worked well together, but the artwork was a bit inconsistent. I didn’t really care for the way many of Superman’s scenes were drawn, which I found to be the only downside.

On that note, now would be a good time to say this book follows two different threads. On the Superman side of things, we see our de-powered Man of Steel work diligently with some of his closest allies to find a way to restore his abilities. It was kind of heartbreaking to see when the Justice League wouldn’t take him out on a mission due to his current plight. A good deal of his thread finds him thinking that he can no longer make a difference before proving to himself that he can.

The other side of the coin happens to focus on Vandal Savage and his exploits over time. His origin is retold and while it remains true to what we already knew, he is given a tie with Krypton that in no way feels contrived or forced. It works. What is offered is actually a pretty good primer on this powerful villain and arrives at just the right time with DC’s Legends of Tomorrow premiering in a matter of weeks.

Their two paths obviously converge, with the story set to continue in the pages of Action Comics #48. It should be interesting to see how an almost mortal Superman will stack up against one of DC’s most dangerous immortals.