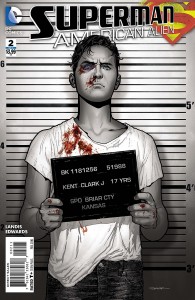 The second issue of Max Landis’ retelling of Superman’s origin has arrived and I can tell you that much like the first issue, it’s a success. While the the debut issue didn’t seem like a radical departure from what we have seen before, this is really where the story starts to diverge in a surprising, yet compelling, way.

As Landis leaps forward to Clark Kent’s teenage years, he’s joined by artist Tommy Lee Edwards, whose work has a bit of a sketchy quality to it. It works given that Clark’s adolescent period is presented in a very authentic, believable way and isn’t sugar-coated. Imagine if Smallville had been on HBO.

It seems that Clark’s closest friends and perhaps even some of the townsfolk are in on his secret. When a grisly crime that is unheard of in Smallville occurs, it’s those nearest to him that finally motivate him to get off his ass and put those alien powers to use.

And does he ever.

This happens to be when Clark first uses his powers offensively as well as to help someone when he breaks up a domestic hostage situation. It’s actually much more violent than what you may be used to seeing in a Superman story, but it works here. He seemingly hasn’t learned to entirely control his powers and apparently isn’t invulnerable as of yet, the latter of which you may have surmised from the cover art. Luckily for him, he once again has Martha Kent to provide guidance following the ordeal.

There is also a brief backup story that teases what’s likely to come a bit later in the series. I’ll just hint that it’s a major Superman villain that I’m extremely interested to see Landis utilize.

It may be a bit early to say this, but I think this will make for a story that we will one day want to see adapted to an animated movie. I mean, Landis is already a screenwriter, so you can’t tell me that it’s a completely preposterous idea.