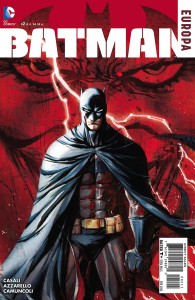 It must be great to be Brian Azzarello right about now. Not only does he get to co-write The Dark Knight III: The Master Race with Frank Miller, but he also co-writes this book with Matteo Casali. Having the privilege to pen two of the biggest Batman stories of 2015 should put a smile on anyone’s face.

Jim Lee, who provided art for the first issue, is now gone with Giuseppe Camuncoli taking his place. While this issue retains the painted look that the first did, it’s not quite as sharp as what Lee did. Then again, opening a series with Jim Lee and then asking for someone to fill his shoes is a rather daunting task for pretty much everybody in the industry. The only thing I really didn’t like about the art was when panels were colored entirely red. It just made everything look a whole lot worse. When you see it for yourself you may agree with me.

We join Batman in Prague as he and the Joker continue to hunt for a virus that’s killing them. While Batman is likely going to come out on top, let’s not rule out the Joker dying in this story. I mean, he’ll probably live, but this is obviously set outside of current continuity. Just look at Batman as he sports the classic grey and blue look, complete with Speedo.

Speaking of the Batman/Joker dynamic, it’s once again captured well in this issue. The fact that the virus is slowing down Batman and making Joker faster is already adding an interesting element to the story. Even more interesting is that our dear Dark Knight really makes learning history fun.

Not all is well with book, at least in my eyes. Seeing Batman fight some goofy robots that looked like they were straight out of a Fleischer Superman cartoon took me right out of the experience. Maybe it’s the fact that this book was announced before even Batman Begins hit theaters that makes the expectations for this book to be extremely high.

While this issue wasn’t as good as the first, it’s riveting enough to make readers come back for more. With only two issues remaining, it will be interesting to see who the mastermind is behind this affair, as they only spoke off panel in this installment. Hopefully the next issue steps it up a bit.