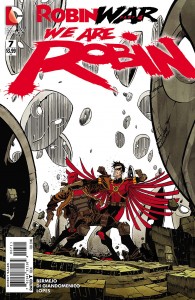 This issue serves as Part 4 of the ongoing “Robin War” crossover event and opens with Batman (Jim Gordon) and Dick Grayson continuing their detective work. Lee Bermejo plays these characters off each other rather well, a quality that he luckily shares with writers of previous chapters. The new Dark Knight and original Boy Wonder finally uncover that Noctua is largely responsible for the plight of the Robins and make the connection between her and the Court of Owls. I can’t wait to see how that thread plays out in the near future.

As with previous chapters of “Robin War,” this issue manages to retain its identity while still functioning as part of a crossover. By that I mean we get some much needed internal monologue from Duke Thomas. As the most prominent member of the “We Are Robin” movement, it’s important that we get his perspective

We don’t settle with him for too long, however, because this chapter delivers on the “Robin vs. Robin” promise made by solicits for this event when the Court of Owls forces Red Hood and Red Robin to battle to the death. I’m guessing this isn’t the first work of fiction you have read and you can therefore make the leap that our heroes have an ace up their sleeve.

I must be honest when I say that I didn’t really care for the artwork in this issue. Characters seem to be weirdly drawn at points and limbs are sometimes in odd positions. At least Carmine Di Giandomenico got to draw what I believe is a new breed of Talon.

Despite most of what I said above, a good portion of the issue seemed uneventful, but this is still a must read for those following “Robin War.” Be sure to come back next week when the adventure continues in the pages of Robin: Son of Batman #7.

Check Out These New Variant Covers for The Dark Knight III: The Master Race #2