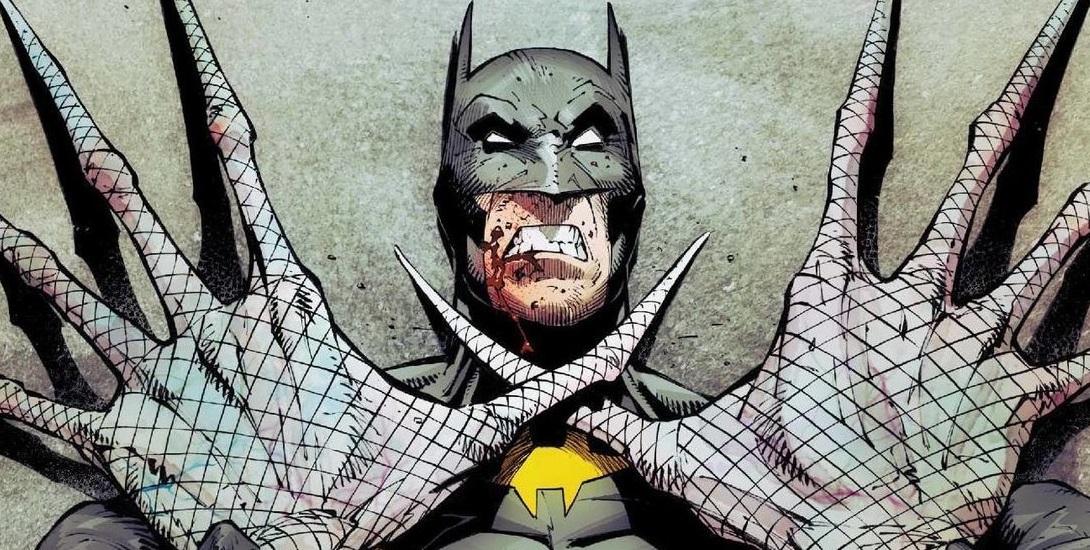 It’s Batman vs. Batbot in the opening pages of Batman #47 this week. Picking up right where the last issue left off, Mr. Bloom has a front row seat in a warehouse watching Batman fight his own machine, Rookie. Unfortunately, this is about the first real round of fisticuffs in “Superheavy,” but it’s done quite well. There’s some good tension built, especially when Batman is thrown at a operating helicopter and barely misses being chopped up. He takes out his “partner,” then takes in Bloom. Meanwhile, Duke Thomas nearly turns into another murdered Robin and is saved by none other than Bruce Wayne. Duke then takes Bruce down to the subway for an eye-opening moment. Back in the Batmobile, Batman and his crew have Mr. Bloom locked up in the back and are ready to take him in… until a clan of Blooms put a stop to it. We end on a familiar shot of Bruce sitting on a park bench.

Then, the Joker sits next to him.

This isn’t flat out Joker, but think more normal person with green eyes and a purple tie. Coincidence? I think not. Bruce says to the man, “I was in an accident near here,” to which the man replies, “so was I.” Awesome! After a few months of “meh,” Scott Snyder and Greg Capullo give us a truly exciting moment. That’s the ending we deserve. So many questions are left to be answered after the final page of issue #47 and hopefully many of them are answered next month.

The ending has pushed this issue above others in this run, but it still didn’t reach the normal level for this team. Capullo’s art is amazing as always, and nothing Snyder writes is less than “good.” There are just many elements of this story I don’t care about. A constant annoyance is always introducing new characters and having them slip into a sidekick role. Here, we have Duke Thomas, who we have known for a while now, but I don’t need another Robin. He serves his purpose in this issue and sets up Bruce Wayne returning to the cowl. However, I feel he’s going to stick around and play a bigger role in the future. Mr. Bloom is also an uninteresting character to me. He’s a bonier Stretch Armstrong who hasn’t really displayed that villainous charm that Batman’s rogues usually do.

Overall, an all right issue with an AWESOME final page that has me looking forward to #48.