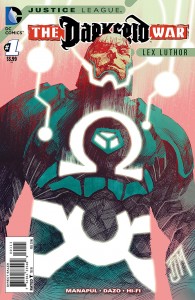 If you aren’t up to speed with what’s been going on in the pages of Justice League, it’s imperative that you know that Darkseid was killed at the hands of the Anti-Monitor and his Omega powers have now gone into Lex Luthor. Sure, I’m highly opposed to the killing of Darkseid and we all know that Lex will likely go back to normal at the end of this arc, but let’s just enjoy the ride.

Unfortunately, this one-shot is not part of the ride to be enjoyed. It’s much more of a supplementary read than a mandatory one. Really, nothing important happens in this book and it’s a pretty quick read.

We follow a nude Lex Luthor as he begins to adjust to his Omega powers. His trek takes him to unseen areas of Apokolips, which were at least interesting to see. Oddly intercut flashbacks are included, some of which work, some of which don’t.

Considering that Lex Luthor and Darkseid are two of my favorite villains, I was expecting so much more out of this book, but it just didn’t deliver. It’s probably best that you skip this one and pick up Justice League #46 next week, which is sure to deliver the goods.