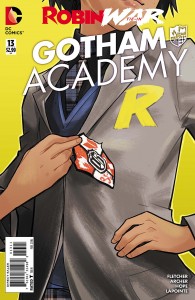 This is the second “Robin War” tie-in to ship this week. Much like Red Hood/Arsenal #7, this isn’t part of the story proper, but is available to enrich your overall reading experience.

Brenden Fletcher delivers what you would normally expect from an issue of Gotham Academy. While the “YA” tone certainly isn’t a bad thing, it’s just not for me. Adam Archer handles artistic duties for this issue and is quite consistent with the manga influenced precedent set by Karl Kerschl. Faithful readers will still feel right at home.

After one student is expelled for being part of the Robin movement currently sweeping Gotham, a girl named Riko shows up as her parents want her to check out the school. It turns out she too is a wannabe Robin, much to the delight of one of the students.

Riko, Olive, and the book’s usual cast of characters spend much of the book hunting a zombie on campus (yes, the second Bat book this week to feature a zombie of some sort, although it works better in this title). Said zombie is dealt with in rather anticlimactic fashion. If this were a movie, it would be a “blink and you’ll miss it” moment.

Elsewhere, the Court of Owls briefly appear… for some reason. Seriously, they’re just there. Damian Wayne also makes a cameo if for no other reason than to include an actual Robin.

Although we see something referenced in previous chapters of “Robin War,” this issue worked much better as just another installment of Gotham Academy, rather than a “Robin War” tie-in. If you’re already a fan of this book, buy it. If you’re considering picking it up for the “Robin War” element, skip it.