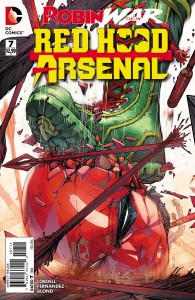 This week, we come to the first “Robin War” tie-in. While not a chapter of the overall story proper, its purpose is to enrich your reading experience if you elect to purchase it. Set during the events of Robin War #1, the events depicted in this particular book occur right before most of the scheisse hits the fan.

A good portion of the book focuses on the dynamic between Red Hood and Red Robin, who kind of see themselves as Batman’s middle children, thus giving them a unique bond. If you bought this book to see some Robins, this is for you. While Scott Lobdell doesn’t really tell us anything we don’t already know about these two, it was nice to gain a little more insight into these characters. It certainly helps that he has experience writing for them both.

Across town, Arsenal and new hire Joker’s Daughter work a gig and actually play off each other well. Arsenal is actually the straight man, with JD being the loose cannon. I know, I’m making it sound like an ’80s cop flick.

The tone of the book, along with Javier Fernandez’s artwork, kind of evokes earlier issues of Grant Morrison’s Batman and Robin run, at least in my opinion. The only thing that felt odd to me was when dwellers – lava zombies from beneath Gotham – made their way to the surface. I’m just highly indifferent when it comes to introducing supernatural elements into Bat titles.

To be quite honest, this book has very little to do with “Robin War,” aside from mentioning it. It works better as a standard issue of Red Hood/Arsenal. You really won’t miss much if you do decide to skip it, but I found it to be an entertaining read.

Personalized Batman Story for Your Sidekick!