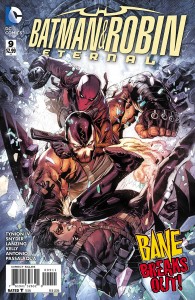 Now is a good time to be a Robin fan. Everyone’s favorite red-breasted heroes are currently tearing it up in Robin War and Batman & Robin Eternal, the book we’re here to discuss.

This issue picks up with Red Robin and Red Hood headed for Santa Prisca. Yes, that Santa Prisca. Apparently, it’s been taken over by fanatical religious sect, the Order of St. Dumas.

As you no doubt deduced from the setting and the cover of this book, Bane gets involved. Our scarlet heroes have a bit of a tussle with him at first before forming an uneasy alliance. The Robins are in search of information regarding Mother and Bane just wants the Order off his island. Also, does anybody else think the unmasked Bane looks a lot like Zangief of Street Fighter fame?

The flashbacks, which happen to be the most intriguing part of the book, once again follow Bruce’s past interaction with Mother. It turns out I was right last week and he was indeed playing her. Unfortunately for him, she is no fool and picked up on his ruse almost immediately. Mother is proving to be a formidable intellectual and physical threat.

In my opinion, this was a rather enjoyable issue. The art was solid and I enjoyed the scenes involving Red Hood, Red Robin, and Bane, but not so much the one with Dick and Harper. There’s also a big reveal on the final page that I won’t spoil. You probably won’t have to strain yourself to figure out who it is since this takes place within an Order of St. Dumas stronghold. Perhaps we will discuss this more in the near future.