This month’s Gotham Academy #11 is an easy, delightful read delving deep into the Silverlock family genealogical history. It also sneaks in a surprise appearance by the Red Robin.

The issue opens in Professor Strange’s office where Olive confides in the professor about odd visions of her mother and the belief that she may still being alive. Olive also informs him of her plans to go into downtown Gotham to investigate her mother’s past when the school travels to Metropolis Academy for a tennis tournament. Not surprisingly, the Professor discourages the idea but sees his advice fall on deaf ears when Olive, Maps and the gang all board the school bus for the field trip into Gotham City. 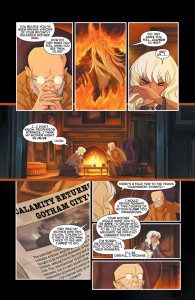 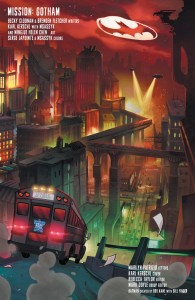 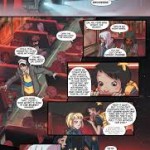 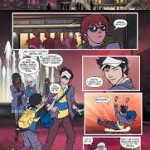 Following Maps well-designed plan, the group quickly breaks away from the school function and splits up. After a few struggles, Olive and Maps make their way to Gotham’s library of records where Olive finds a cabinet full of Silverlock documentation dating back more than a century. While Olive shuffles through the documents looking for clues, Maps proudly dons a homemade superhero mask and snoops around the rest of the library. To her surprise, and excitement, she runs into the Red Robin. 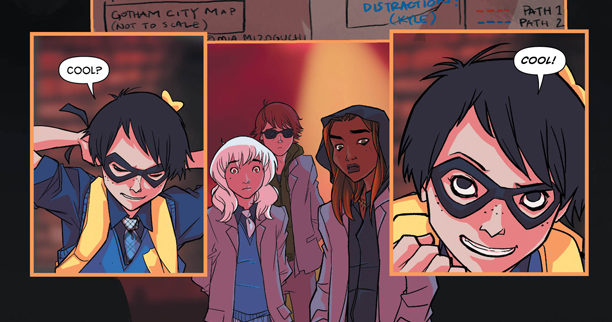 Although the Red Robin shows no interest in hanging around, he quickly changes his mind when Maps mentions Calamity. After warning Maps to steer clear of her, he gives her a brief run-down of Batman and the original Robin’s first encounter with Calamity when she tried to burn down Gotham. From that encounter, Batman not only unveiled Calamity’s real identity as Sybil Silverlock, but made sure she was put away for a long time. After later learning that she wasn’t the first Silverlock to try  burning down Gotham, he later arranged to have her young daughter put somewhere safe here she could be watched.

Meanwhile, Olive’s search through the Silverlock records uncovers some interesting, and disturbing details about her family’s past. Apparently, several generations of her ancestry have gone by the name “Calamity” and were all locked away in prisons or asylums. This alarming information leaves Olive wondering if her future holds the same fate.

Seconds later, Olive hears her mother’s voice behind her confirming the documentation to be true and explaining that like her, Olive and Calamity are one and the same. In the midst of their talk, her mother starts another fire in the library which gains the attention of Maps and the Red Robin. Charging to Olive’s aid, the two of them square off against Calamity, leaving Olive caught in the middle trying to stop the fight. Uninterested in fighting, Calamity bids Olive farewell but promises they will meet again soon. When the action subsides, Maps is so star struck by her infatuation, and temporary partnership, with the Red Robin that she tries to gain an introduction with Batman.

When Olive and the gang finally return to the tennis match to board the bus for the trip back to the school, they find that Kyle is suddenly missing after having walked into the locker room. While they wait on the police to arrive, the kids find a puzzle key lying beside Kyle’s locker. The issue ends with Olive’s revelation that she thinks the key is one from Arkham Asylum.

With all its mysterious elements, this issue is definitely fun and the collaboration of writing and artwork are superb. The mix of full and irregular frames, sparing use of close-ups and the smooth story telling voice keeps the mood and pace of the story spot-on for readers. As this series progresses, I find myself particularly enjoying the well-delivered depth of the back stories and its expert merging with the forward arcs of the characters.