The Turtles are coming to Gotham.

It was announced over the summer that our dreams would come true this year: Batman and the Teenage Mutant Ninja Turtles will be featured in the same comic. Minds were blown, dreams became true and nerds all over rejoiced. I fall into each of those and cannot wait for the 6-issue series. Newsarama recently spoke with James Tynion IV, the man behind the upcoming story (and popular Dark Knight writer), to hear about what we can expect when the first issue hits stands in December.

“This project is like a fanboy dream come true, and being able to put such iconic characters like the Turtles in front of Batman. But yeah, this is a crazy situation, but Batman is familiar with crazy situations. But all of the sudden, having a bunch of teenage turtles running around Gotham City is a situation he was not anticipating in any way.”

Tynion went on to say this has been a dream project for everyone involved for a long time and it makes a lot of sense to have these characters crossover.

“…it’s also very natural. When you look at the Turtles, their roots — their comic book roots in particular — they come very much from Frank Miller, and Batman of the modern era comes very much from Frank Miller. The Turtles were a bit crazier expression of that. But there is a natural core center that you can take them back to, which is that — you know, Batman is also a ninja. Batman was trained in a very similar way to these Turtles.

So what can we, the fans, expect in issue #1? Well, he couldn’t say much but enough to further whet our appetites.

“…the core premise is that the Teenage Mutant Ninja Turtles, as well as Shredder and the entire Foot Clan have been transported into Gotham City. We will reveal over the course of the series that this is part of a plot by Krang to get them off the table so he can accomplish his goals back in the New York City in the Turtles world. But in terms of this story, we’re going to start in a Gotham City where there are now Turtles and ninjas running around in secret, and it’s Batman trying to figure out what on earth has happened.”

I don’t know any Batman fan who isn’t a Turtles fan and vice versa. I totally trust in Tynion that he’s going to rock this series and I can’t wait. 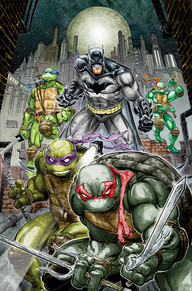