Before the Futures End event that took up the better part of last year and ended this year, Kyle Higgins (Cowl, Nightwing) had been in charge of a monthly Batman Beyond series called Batman Beyond 2.0. It was fantastic for anyone that was a fan of the animated series in the early 2000’s and actually had a ton of nods to Batman: The Animated Series for the fans of that show. Higgins had huge plans for the series and if he had stayed on the title, those plans would have been realized. Higgins and DC did not have an ‘amicable’ split, and all of the plans he had were kind of morphed into the Futures End event. I’m not going to start this honest review off with a lie, so I’ll just say this right off the bat; I did not read Futures End. Oh, trust me, I started the event, but I genuinely didn’t care about most of the characters and the story kind of bored me. The end result of the event didn’t really matter anyway, because the future depicted in the book was never a finality. That being said, I LOVE the character of Terry McGinnis and of the stories I grew up with with that character. Under the helm of Dan Jurgens, will the current title live up to my hype? 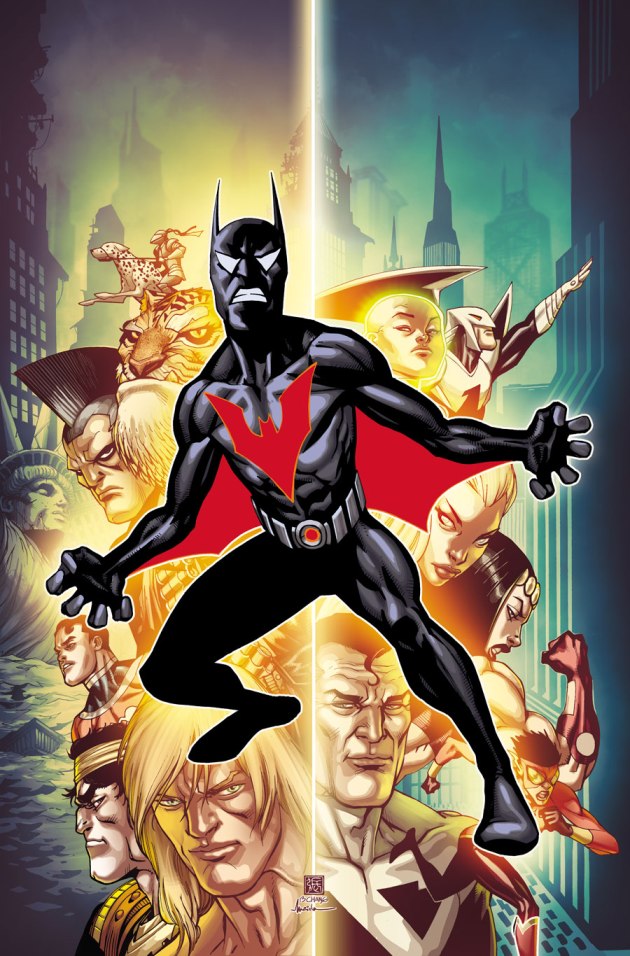 Apparently, at the end of Futures End, Terry McGinnis dies, so I was already kind of let down. Not to judge a book by it’s cover, I decided to read on because the character that takes over for Terry is another favorite of mine. Tim Drake has taken over the mantle of Batman Beyond and is thrown into a future he doesn’t understand and one that is still under the influence of Brother Eye. The majority of the issue focuses on how Tim finds his bearings in the foreign future with his trusty side kick, the A.I. Alfred. To top off his bad day, Tim runs into this future’s Superman! A half-cyborg, but not cyborg Superman, half-man monstrosity that is under the control of Brother Eye and he has his eyes set on Batman. See what I did there? He’s under the control of Brother ‘Eye’. I like to have fun.

I’ve seen a lot of reviews for this issue that are not so flattering. I have to admit, I really enjoyed this issue. Yes, it was a little confusing at first, which is my fault for not reading Futures End, but I was able to muddle through it. Do I think this series will be my favorite for the year? Probably not? For the week? Not at all, that actually goes to Justice League #40 so check out my review for that if you’re interested. However, this issue was fun and enjoyable and the last page is one that makes me excited to see where the series goes.