Fans of Batman know that Bat-mite doesn’t entirely jive with the more gritty serious direction DC has taken since the 80s. Sure he’s popped up here and there, but Bat-Mite has been mostly regulated to cameos, or the occasional nod in media. In the last ten years though, Bat-Mite’s gotten more appearances. Appearing in Superman/Batman, Grant Morrison’s run on Batman, and even as a reoccurring character on Batman: The Brave and the Bold, voiced by Paul “Pee-Wee Herman” Reubens. Since the Nu52 launched in 2011, Bat-Mite’s been on the down low, so cue the surprise when it was announced he’d be getting his own mini-series after the Convergence event is finished.  After Convergence, the new 52 title will be dropped from DC Comics, along with a general shift in trying new and different kind of comics, Bat-Mite being one of them. So what are the details on the new Bat-Mite mini? What can we expect when the six issue mini series launches this June?

Bat-Mite will be drawn by Corin Howell, a relative newcomer and apprentice to the great Sean Murphy via the Murphy Apprenticeship program. In an interview with Newsarama, she said her art background and influences are very suited for the kind of wackiness that involves Bat-Mite, naming some of the artists she takes inspiration from like her mentor Sean Murphy, Becky Cloonan, Bernie Wrightson and animators like Glen Keane and Don Bluth. All of those artists are well known for drawing action in comics with a lot of liveliness. With that in mind, Howell’s goal is to make Bat-Mite very animated and expressive.  The whole book will feel goofy and cartoony. He’s been described by Corin as “an annoying ray of sunshine beaming on your face when all you want to do is sleep in your dark, brooding bat cave”.  While the mini series will be goofy, it will also have some serious tones, given that it is a Batman book. A nice mix of seriousness and comedy could work very well with this particular character, who himself is a goofball, but is absolutely a giant fan of someone who’s been grim and serious nonstop since the Bronze Age of Comics. Bat-Mite’s goal in the mini will be to “fix” the broken heroes around Batman. Heroes he feels are probably a detriment to his Dark Knight icon. We’ll see more when the book launches this June. Check out some previews down below for a better look at what Bat-Mite will look like. 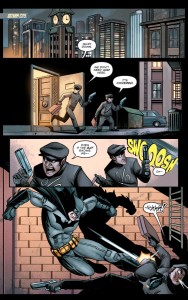 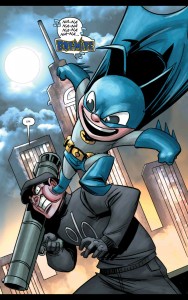 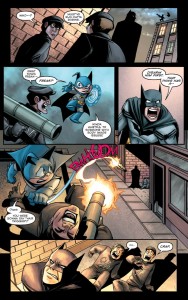 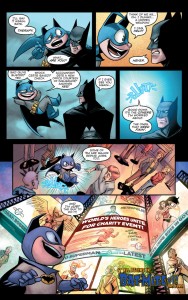