Gotham headed into the fall TV season with perhaps the highest expectations of all new shows. FOX certainly believes in it, pitting it against a competitive Monday night lineup (The Voice, Big Bang Theory, Monday Night Football). They have even streamed a deal with Netflix. After debuting Monday night to 8 million viewers, did they fall short? Or soar above what anyone was expecting? 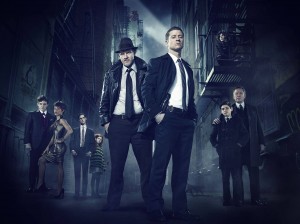 Writer’s note: Since the announcement of Gotham, I haven’t been fully on board. A Batman show without Batman, but instead his usual cast of supporting characters takes over the spotlight. I enjoy Jim Gordon, Harvey Bullock and the rogues gallery… just not as the stars of the show. We NEED The Dark Knight. Nevertheless, I’m always going to give DC a chance. Despite my hesitancy, I was still looking forward to this show, hoping it would sway my opinion.

Gotham succeeded, yet disappointed. It wasn’t bad, but wasn’t good. Are you confused yet? I am too because I’m not sure how I feel about the premiere. Here’s what bugged me, and I’ll finish with what I liked. I’m an optimist and like ending on a high note.

First strike? The soundtrack! It was inconsistent and distracting. The score plays a critical part in the success of a TV drama or film, and this one failed more than nailed. The music playing when Gotham appeared on the screen coming at us reminded me of The Avengers… and that is not a good thing.

Next strike: we met so many characters! Perhaps too many. Gordon, Bullock, Wayne, Pennyworth, Montoya, Allen, Mooney, Cobblepot, Nigma, Falcone (not Falcon E ) and so many more. Us Batfans were able to keep up because are familiar with the world, but for the unfamiliar… this is approaching Game of Thrones-level of cast. The large cast prevented us from strongly attaching to any character.

Strike three: acting. It wasn’t bad but definitely had some “eek” moments (Stay frosty?). A few of the characters didn’t have much to say but what they were given didn’t help either. Barbara Keen flatlined immediately upon her debut. I felt no chemistry between her and Gordon. Alfred (Earth One anyone?) also didn’t do much for me. He was hard to understand at times, and stepped beyond “tough love” and into “hard ass,” which isn’t a version of the character I like. Ivy Pepper (really?) had a few lines and I wish she didn’t. Selina Kyle didn’t have any and I wish she did. I found her stalking to be more of an annoyance than intriguing. Maybe that will change next week. 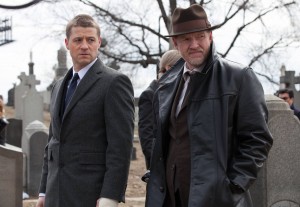 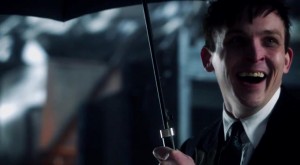 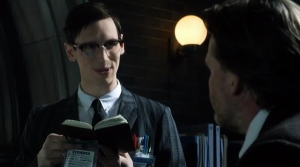 As for the positives: acting! Gordon, Bullock, Cobblepot and Nigma knocked it out of the park! Cobblepot (Penguin) is going to be a shining point of this series, and even though Nigma was only on screen for 15 seconds, I’m excited to see what they do with him. I even enjoyed Fish Mooney. When the acting was good, it was really good. 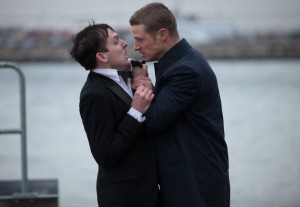 Another positive: that ending. The final act set up what I believe to be a major point of the show moving forward. It said a lot about the character of Gordon, Bullock and even Penguin… especially his final moment. It sent us out on a high note… granted it wasn’t exactly anything happy.

Overall, I’m aware this sounds like a negative review of the show’s premiere episode. On the contrary, I was actually sort of surprised by it… it just has some work to do, as do all shows from their Pilot episode.  As for now, I’m a Gotham City resident and I hope you are too. 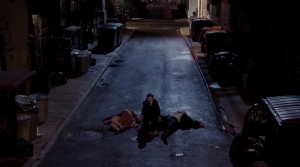 God help us all.

Click here for a sneak peek at next week’s episode.