Adam West, known to many as Batman will be appearing in the upcoming Lego Batman 3: Beyond Gotham. The team behind the game confirmed the announcement themselves via Twitter. 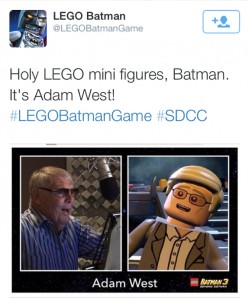 West joins returning cast members Troy Baker and Travis Willingham, who voiced Batman and Superman in previous games, and others… adding up to 150 DC characters in all. Warner Bros. says West will also join the Lego Batman 3 panel at San Diego Comic-Con on July 27.

Once again my friends, I believe a dance is in order…