REVIEW: Son of Batman (Spoilers Ahead!) 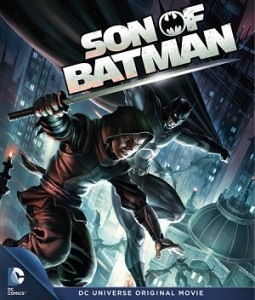 As a DC fan, you can’t always expect every animated feature that Warner Premier puts out to be an right on the money when it comes to adapting popular comic book stories. Some films that took liberties were instant classics; Batman: The Dark Knight Returns, Batman: Year One, and Batman: Under the Red Hood are just a few that spring to mind when I think “awesome DC animated film.” I’m sure some of you will dispute this, and others will agree with me.

But take notice that I mentioned only the Batman films. Now, that isn’t to say that all the other animated features were absolutely terrible (I still like to watch Superman/ Batman: Public Enemies and Superman/ Batman: Apocalypse on a regular basis), because there is some quality work that Warner Premier has put out that deserves — nay, demands our attention and respect.

I could go prattling on about the entire DC animated film universe, but that’s not the point of this article. No, I’m here to review the latest animation to come out of Warner, Son of Batman.

[SPOILERS AHEAD]
Warning. The following article contains spoilers for Son of Batman. If you do not wish to potentially ruin your movie experience, we recommend clicking away to another page on our site. Maybe listen to the latest episode of DKN Radio on the Podcast page. The opinions expressed herein are solely those of the author, and do not necessarily reflect the views of Dark Knight News.

Son of Batman is a harrowing tale of deceit and surprises, ace detective work, and utter…utter violence.

Ra’s al Ghul, leader of the League of Assassins (and ultimate thorn in Batman’s side), has met with a terrible fate beyond the healing powers of the Lazarus Pit. Someone is after the al Ghul family, and his only goal is to wipe the rest of them out and claim his place as the new leader of the League. 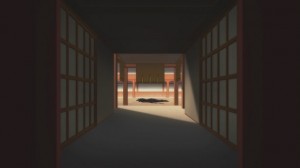 Talia escapes with her son Damian to Gotham City, to meet and seek protection from the only person that she knows can and will protect her son – the Batman. She introduces Damian to the Dark Knight as his son, and he agrees to take him under his wing. Soon afterwards, Talia gets captured by Deathstroke when she tries to take back her father’s hidden mountain base with the help of a handful of Assassins. They are quickly dispatched, as they accidentally tripped a security system that triggered a wall collapse on top of them. Talia amazingly still stands from the collapse, and takes a few enemies down with her sword. But Deathstroke appears and captures her. 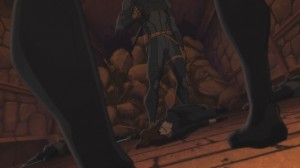 Back in Gotham, Batman’s a little reluctant to believe that Damian is his son, but somewhere early along the way he just accepts it. Also at first, he refuses to let Damian out with him on his nightly excursions. But after he sees Damian trim the shrubbery, and Damian sneaks away and beats the ever-living crap out of a former Ra’s al Ghul follower and cuts Nightwing almost to ribbons, Batman agrees to make his son the new Robin.

Deathstroke reactivates a secret underwater League of Assassins base just off the coast of Scotland, and Batman and Robin embark on a mission to rescue Talia and stop Deathstroke from doing whatever it was that he was planning to do from his secret underwater ocean base off the coast of Scotland (turns out, he was turning his assassins into Man-Bats with the help of Kirk Langstrom — the original Man-Bat — and his mutagenic formula. Why was he doing it? Who knows. This is never explained).

Batman and Robin make quick work of the juiced-up assassins and overcome Deathstroke with great success, and they even survive the affair with a little help from Nightwing (who moments before was in the Batcave in Gotham with Langstrom cooking up an antidote for the Man-Bat serum and now five minutes later is in Scotland with the Batwing).

The sun is setting, and Talia and Batman have a small debate over who should take custody of Damian. Batman used the infallible “He put on the Robin costume so he’s Robin now so he can’t leave me so there” argument, validating his authority with a superior sense of logic. 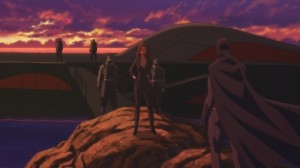 That’s the story. Now, let’s break it down into five categories: Voice Acting, Animation, Storytelling, Score, and Fidelity to the Source Material. Every category is scored 1 to 5, with 5 being the best.

Jason O’Mara (Batman/ Bruce Wayne) – He reprised his role as Batman from Justice League: War. If you haven’t seen it, it’s a pretty decent animated film. O’Mara’s portrayal of the character in JL:W was good, but for some reason, it was just bland in Son of Batman. I didn’t feel like Batman was super interested in anything that was happening around him. O’Mara’s voice was rather monotone throughout the entire film and it disappointed me. Make Batman sound tough, sure, but give him a little LIFE for crying out loud. He’s a brooding crimefighter who hides his emotions, not a heartless, stone-cold machine!

Stuart Allan (Robin/ Damian Wayne) – This little guy surprised me. He has had a few roles in high-profile projects (Rise of the Guardians, It’s Always Sunny in Philadelphia), but his experience seemed to have paid off – somewhat. I’m not going to say he was great just because he’s a kid and I can’t be mean to kids. I felt like he probably didn’t read too much into the character of Damian, and was only told what kind of person his character was. And that’s all we got out of him. Very little time was spent developing the character in the movie, and I think Allan’s performance suffered because of it.

Thomas Gibson (Deathstroke/ Slade Wilson) – If ever there were an actor who fits the role of “cheesy overacting for a villain who is supposed to be intimidating,” it’s Thomas Gibson (Criminal Minds, Dharma & Greg). You know how in anime cartoons, there is always one character (evil or good, confident or bumbling), who is over-the-top, talks too much, and makes the animation seem much more cartoony than it already is? Yeah, that’s this guy. Manu Bennett’s Deathstroke makes Thomas Gibson’s Deathstroke look like the Trix Rabbit. Silly Gibson, Deathstroke’s for a mature audience!

Giancarlo Esposito (Ra’s Al Ghul) – His performance, while short-lived in the film, was one of the few good things about the movie. While I currently maintain that no actor will ever surpass David Warner’s performance as Batman’s greatest nemesis, Esposito stepped up to the role like a pro and made me sad when his time in the film was over. His talent was DEFINITELY underused in this film.

Morena Baccarin (Talia Al Ghul) – Her performance was the only one that seemed convincing. When Talia was in the fray, Baccarin’s voice added the sound and feeling of desperation when Talia’s world came crashing down around her. Baccarin brought to life the lustful taunts that Talia threw at Batman. And Baccarin’s performance made me feel like Talia was a strong mother who would do anything to protect her family. Hers was the strongest performance of all the actors in this feature, and if Andrea Romano saw fit to bring Jason O’Mara back, I hope she has the foresight to use Morena Baccarin in the future, because there can be no one better than she to fill the role again.

In continuing the Warner Premier tradition of Japanese anime-style animation since The Dark Knight Returns, Son of Batman shows us that you can still make an animated movie look good without moving characters around too much. The fight scenes were short, but well done. The violence in the film was pretty intensely animated, and with all the blood and severed limbs and burned flesh, it’s amazing SoB got away with a PG-13 rating.

Batman’s costume was pretty cool, too. Not the greatest I’ve seen (I still love the Michael Turner design the best from Superman/ Batman: Apocalypse), but the shadowing on the bat symbol on Batman’s chest is hard to ignore. Then there’s the obvious nods to previous incarnations of the costume when Damian is exploring the cave and stumbles across Batman’s glass case wardrobe. The backgrounds were also all well done.

There are some bits of animation that don’t make sense: the oil rig falling at the end of the film as the ocean base is collapsing, and while Damian is chasing Ubu, he puts down his sword to fight him, but when he gives chase a second time, the sword is right back in its scabbard. An inconsistency to be sure, because he definitely shouldn’t have had his sword when Nightwing showed up.

Joe R. Lansdale, whose writing credits include episodes from Batman: The Animated Series, wrote the screenplay for Son of Batman. Kirk Langstrom is making Man-Bat serum for Ra’s, and then for Deathstroke after his family is threatened. But Deathstroke isn’t turning civilians into Man-Bats, just his ninjas. He’s not threatening the general populace with some virus or poison or anything like that. There’s a scene where Batman beats the ever-living hell out of Killer Croc because Croc is stealing drugs. Then Batman rips his tail off in Arkham because Croc’s health is deteriorating quickly, and Batman wanted to show him how bad of shape he was in. So Batman offers to help Croc in some way in exchange for the information he seeks, and…next scene, Batman’s at Langstrom’s house. His house. Don’t you think that would be the first place Batman would look if he were looking for Kirk Langstrom? His home? I mean, come on, Lansdale.

The music in this movie was composed by Frederik Wiedmann (Justice League: Flashpoint Paradox). The score was what set the tone, and it almost made me forget the Swiss cheese plotline in this film. One of the film’s few positives. This guy has a future in movie score composition. SOB‘s score sets the mood, allows us to feel the intensity of each situation, and even fills in the emotional holes left by poor character building.

Fidelity to the Source Material (1/5)

Son of Batman is based on the 2006 graphic novel Batman and Son, written by Grant Morrison and penciled by Andy Kubert. If this movie is based on the book, then the story of my life is based on that of Donald Trump. Son of Batman takes nearly everything about the graphic novel and throws it out the window. An entirely NEW story is told here, and for what it was, it wasn’t very thrilling. I don’t hate Joe Lansdale’s B:TAS episodes. “Perchance to Dream” is one of my top ten, in fact. I don’t know what went wrong here, whether Warner was pushing for something that could fit into the animated New 52 universe they’re trying to build, or what, but I can’t imagine that would cause them to completely change everything about the book when translating it to film.

For what it was, some people might find it entertaining. I was so excited to see the film adaptation of Batman and Son, and now that I finally have, I feel like Warner Premier let me down. But at least they pronounced “Ra’s” correctly.