Bane star Tom Hardy has always “been frightened by men” 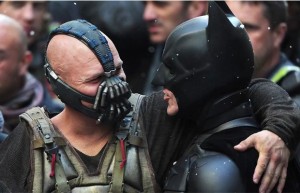 Dark Knight Rises superstar Tom Hardy – who played the all-conquering villain Bane that broke the Bat – has admitted he isn’t so tough. Having played a variety of movie roles where he has brilliantly built “tough man” personas, we find out that he is the exact opposite.

I have always been frightened with men, to the point where I couldn’t go into a gym because of the testosterone and I felt weak.”

He goes on to explain,

“I don’t feel very manly, I don’t feel rugged and strong and capable in real life, not how I imagine a man ought to be. So I seek it, to mimic it and maybe understand it, or maybe to draw it into my own reality. People who are scary, they terrify me, but I can imitate them. I’m not a fighter. I’m a petite little bourgeois boy from London. I don’t fight, I mimic.”

Who would have thought such a brilliant actor, who can convince the world on the big screen that he is one of the ultimate tough guys, really isn’t at all. It simply proves his onscreen transformations are nothing short of phenomenal.