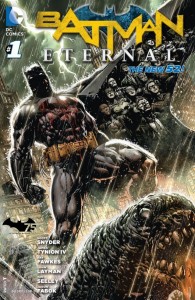 The kick-off issue of the ambitious Batman weekly has finally arrived and it does it ever deliver! This series is set to radically shake up the status quo of Batman’s corner of the DC Universe and change happens in this inaugural issue. (More on that later.) I believe this is to be a 52 issue series, so Scott Snyder and company have quite the grand scheme in the works. Snyder is joined by an all-star team of writers that are listed above. This may sound like a bit much, but they are rotating issues. For this chapter, Snyder and Tynion handle scripting duties with the rest acting as consultants. Art is handled by the superhuman Jason Fabok, whom I’ve said on various occasions draws the best Batman in the business today. Not only does he churn out what are some of his most stunning depictions of the Dark Knight, he also crafts a living, breathing Gotham City. I’m not joking; you feel like you could just walk right into his panels or confuse this for an Arkham game and pick up a controller. He’s sticking around to provide interiors up through issue #3 and providing only the cover for #4. I hope to see him back in the near future.

The book begins with a flash forward to the end of the series that sees Batman stripped of his shirt and cowl and tied to a broken Batsignal with Gotham burning behind him. Just who is responsible for wanting to take everything from Batman? I can’t wait to find out. When we come to the present on the next page, we meet Jason Bard, a new recruit for the GCPD. He seems to have a strong moral center, so maybe he will prove to be a valuable ally for Batman one day. It appears that he will be an important cog in the Eternal machine, so you may want to keep an eye on him. Professor Pyg, my favorite original villain of the past decade since Hush, makes a splash in this issue. If you’re someone that loves to see Gordon take a piece of the action and team up with Batman, there’s plenty to enjoy here.

You’ve likely seen teasers for Batman Eternal or perhaps even the cover of the next issue that features Gordon in handcuffs. He does indeed get arrested at the end of this issue and is obviously set up by someone when he causes a massive atrocity. You’ll just have to pick up the issue to see what happened. Believe me, there’s no way someone would not go to jail for this one. It appears that the person responsible was at the scene and it’s likely whatever villain is pulling the strings leading to Gotham’s inevitable burning. The mystery villain also knows Batman is Bruce Wayne. Let the speculation begin!

I’ve never been one to collect weeklies on a regular basis. Every comic book collector can attest that those price tags build up. I’ve bought weeklies here and there in the past and read the trades. Well, they’ve really got my attention with this one. Eternal has all the right ingredients for a definitive Batman story and I plan to stick around for awhile. If that’s not enough, The New 52: Futures End looks to be shaping up to be something awesome as well. It’s a very exciting time to be a fan of Batman and DC in general. Here’s to 75 more years, Bruce. Score: 10/10