Hugo speaks about how Arkham Knight‘s Gotham City builds upon the Gothic architectural style that permeated the previous Arkham games:

“One of the first things we did when we started was to try to imagine ourselves living in Gotham City as a normal person…and after that, it was figuring out how we can build on from the grand Gothic architecture we’ve been toying around with over the last few years – and the Art Deco/Art Nouveau elements – and to make those feel like a believable city.” 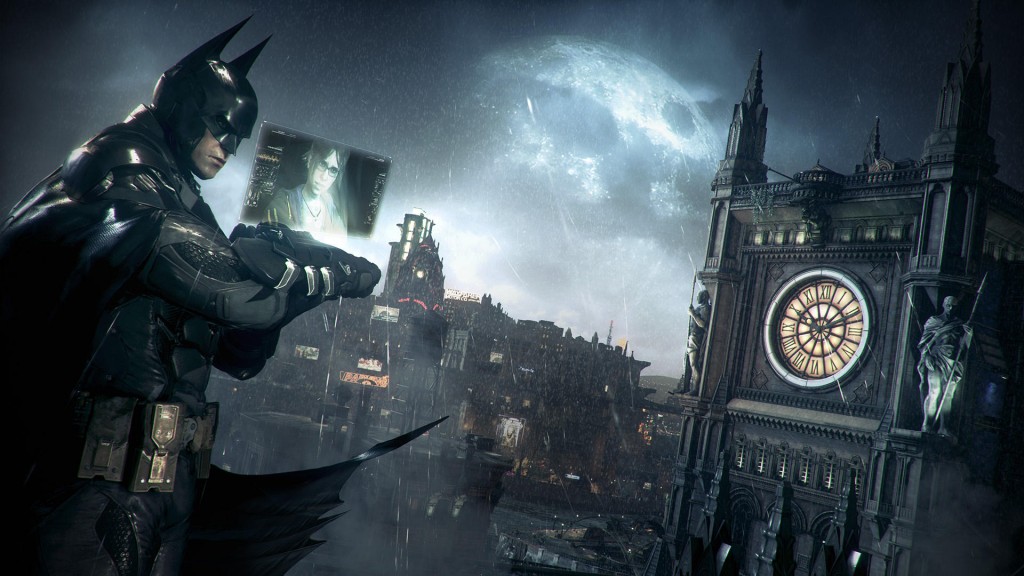 Hugo states that particular city-design elements will contribute to the feeling that Arkham Knight‘s Gotham exists in its own time, or rather, that the city experience may feel “out of time”:

“It kind of worked in layers; we added neons, added advertisement billboards and stuff, and started thinking about what kind of shops you’d find in Gotham City – once again keeping that grimy, believable dystopian-like city feel. And every kind of element we’ve added in there, whether iconic American cars or every other kind of asset, makes the entire experience feel a little out of time. You couldn’t pinpoint whether its twenty years ago, now or in ten years time.”

However, one may argue that the entire Arkham series seems holistically anachronistic, particularly regarding its architectural and visual elements (i.e. Wonder Tower’s robots, the city’s posters and ads, Gothic spires galore, machine-gun-toting psychos, Oswald Cobblepot’s monocle and garb, etc.); still, hopefully Arkham Knight has more up its sleeve regarding the series’ effective anachronistic qualities, which contribute to player immersion.

Regarding Batman’s vehicle and suit, Hugo spoke of technological and aesthetic consistency, which led to the suit and Batmobile to be designed together:

“We designed Batman’s new suit and the Batmobile together. The concept behind that was the Batmobile is a tank meets a jet fighter meets a very serious sports car, and we wanted that blend of man and machine, so it looks like it all comes from the same design, and works hand in hand.”

Will Arkham Knight be the definitive Batman experience that many of us have been waiting for?  Perhaps.