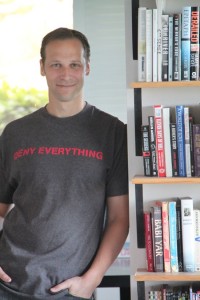 Batman: The Dark Knight comic book series is coming to an end with issue 29. One of its writers, Gregg Hurwitz who wrote for DC initially signed on for a single arc and ended up writing over a two-year period described it as “really damn fun”. DC support staff Mike Marts, Geoff Johns, Rickey Purdin, and Darren Shaw have all been thanked including writers Scott Snyder, Peter Tomasi, Gail Simone, JH Williams III, and Kyle Higgins.

Gregg makes mention of Sonia Oback, Brian Miller of Hi-Fi, Dave McCaig, and John Kalisz who provided whats described as “fantastic work” on colours including Dezi Sienty who was a specialist in lettering.

David Finch (artist) initially was drawing and writing for the series was one of the original people who invited Greg to write. Both Gregg and David Finch worked on the character “Mr Crane”. Ethan Van Badass worked alongside Greg on the “Hatter” arc and then Alex Maleev who with his drawing skills brought “Clayface” to life. Gregg worked with Penguin: Pain and Prejudice artist, Szymon Kudranski on a few issues including the annual. In thanking the people above Greg describes the team as some of the “finest comic book artists in the world”.

Dan DiDio four years ago approached Gregg Hurwitz to work on the series and Dan wanted to know what Gregg’s take on “fun” was. Gregg mentions that he really wanted to do a penguin story. Not what Dan expected but DC said yes to the idea. Some of the feedback on the internet brought back voting results (on Oswald titles) at a low .o7%. 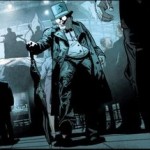 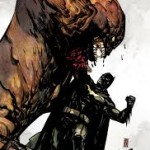 The Batman vs Clayface

“It was you guys who picked up Penguin and through word of mouth turned it into the commercial and critical success it was. It was you who put TDK consistently way up there on bestsellers charts, landing us at the top of the New York Times hardcover graphic novel list. And it’s been your enthusiasm and energy that’s made my run on the title one of the most gratifying jobs I’ve ever had”

There is a two part “finale” coming that has been worked on by Alberto Ponticelli and Van Sciver bringing the fans a man-bat like no other. Greg Hurwitz is not finished here though, he will be working on Detective #27 anniversary issue which will be drawn by Neal Adams.