Batman #26 continues Bruce’s Zero Year arc, as amid the shadows of Dark City’s third chapter, Bruce finds himself in the clutches of Doctor Death.  As this origin story continues to carve a new path, where will it take our burgeoning hero? 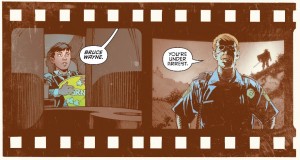 Dark City: Part Three jumps right into the moments after Batman #25’s huge cliffhanger as a drugged Bruce Wayne is recovering from a surprise attack.  As he attempts to recover and take on Doctor Death, he is badly injured only to be rescued by Jim Gordon.  Despite this, there is no love lost between the two, and while exchanging a few heated words, a large part of their history is revealed.  This leads an enraged Bruce to continue to push his fight for justice in a sloppy manner, leaving him in the worst situation that we have seen him in thus far in Zero Year.

“What is it that they say?  Sticks and Stones may break my bones…”   Zero Year hit the ground running, so much so that many wondered what else would happen to fill its eleven issue arc.  However, With Dark City, Scott Snyder’s long game is starting to show. This issue is exposition heavy with many sub-stories happening all at the same time.  Unfortunately this means some things are bound to suffer.  Gotham and The Riddler have taken a back seat, so much so that, with only a quick mention of the impending doom, you can even say they aren’t even in the car anymore.  The length of this arc also seems to be taking its toll on Greg Capullo’s art, as this issue seems like some of his weaker work.  Even with Danny Miki’s colors as support, many of this issues panels seem a bit bland and lifeless, and some characters, most noticeably Batman, seem a bit off.

“I don’t have time for this Al–.”  There is so much exposition in this issue, and yet it is the shortest one so far.  There is no back up story and those pages are not used to expand the main plot as they have been in previous issues.  This makes the issue feel even more crammed and heavy, yet paradoxically a quick read.

“You remember the start of it, old friend?”  Thankfully though, Snyder knows Batman and, as with the rest of the series thus far, he is not afraid to show it.  Dancing around moments that fans know beat for beat, Batman #26 still manages to give new moments enriched with nods to all things before.  While not as blatant as some others have been, the tributes payed here are equally exciting to see. 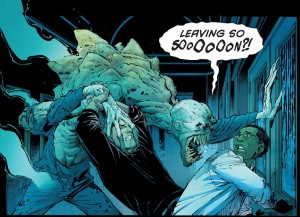 Batman #26 is a bit of a tough sell.  While it is a weaker stand alone issue, it is apparent that it fits into the bigger picture.  Snyder  is building up to something and issues like this are necessary to have those big moments be truly  impactful.  Similarly, Capullo’s skills aren’t on display here, but even when not at peak performance, his art still looks great.  Hopefully next month’s issue brings back the hard-hitting action, as we dig up some Buried Bones.