It was a huge ordeal when J.H. Williams III and W. Haden Blackman suddenly quit writing for Batwoman, as the two writers had built up a complex storyline and made Kate Kane into an equally complex and well-developed character. Providing more explanation, Williams stated that it was due to last minute editorial decisions and restrictions that had frustrated them to the point of leaving — among these restrictions were the origins and character development of Killer Croc and the heartbreaking censorship of Maggie and Kate’s wedding. Of course, every media outlet then decided to focus their attention on the latter, creating hype and controversy in a situation where it was not much needed. In order to reconcile this controversy, DC hired the new writer Mark Andreyko shortly afterward, who is openly gay and has written many strong female characters in the past. And then, the new debate hit — how is Mark Andreyko going to resolve this arc that Williams and Blackman left off in the middle of?

Despite all our hopes, we still don’t know yet. Fans of Batwoman were virtually spoiled rotten by the incredible art and engaging characters and storyline that Williams and Blackman had created, so it was a shocker when J.H. Williams announced that they had dropped the job. Andreyko, who has a pretty hard act to follow, said that he will resolve the arc in a few issues, but it seems that all he did in Batwoman #25 was buy himself more time by providing a rushed tie-in to the Zero Year event going on in Batman. While this understandable, given the suddenness of this project for him, it’s hardly impressive. We see nothing really developing Kate’s character apart from her first encounter with Maggie, and even that is brief and uneventful. It’s an enjoyable read and certainly it’s not the worst issue we’ve seen in Zero Year, but for Batwoman fans it may seem a bit bland because of the complexity and beauty that we were given by the last creative team.

Knowing this, many people have been disappointed by Andreyko’s work on this issue of Batwoman. But anyone who’s read any of Andreyko’s work before also knows that his writing is much more lighthearted, and that tends to be the charm of it. Given more preparation, Andreyko could have written something very engaging, fun, and much more solid. So, keeping a more lighthearted approach in mind, let’s break this issue down piece by piece (and hopefully have some fun along the way). 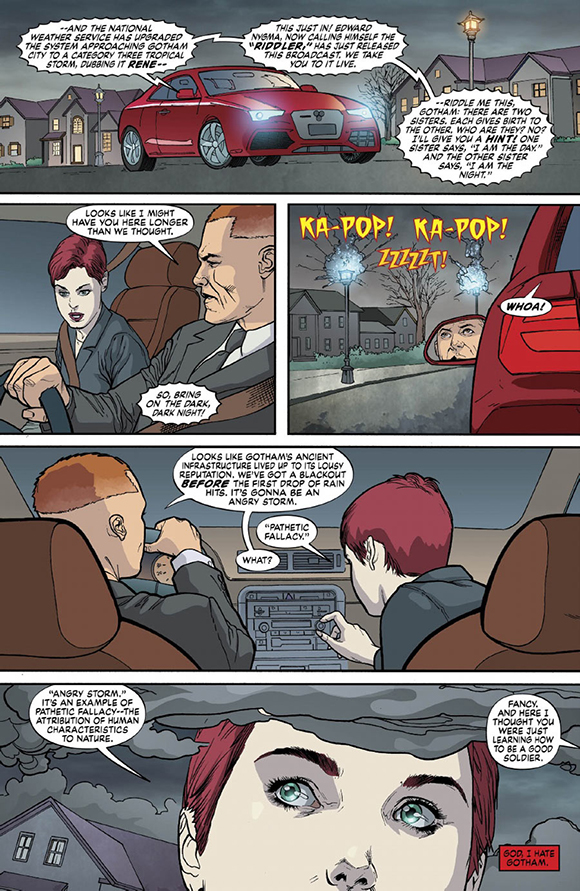 The story opens with Kate receiving a call from her dad about the death of Philip Kane, with a couple of flash-back/flash-forward transitions here and there leading up to a splash page of her drowning. Already, the artwork is somewhat sub-par. About 4 pages in, getting back to the part before she was drowning, the Riddler makes his announcement over radio (which is a nice callback to how supervillains used to do things in the 1940’s), and no sooner does that happen than he blacks out the city. Kate says it best herself: “God, I hate Gotham.”

In the meantime, Maggie is off somewhere being transferred to Gotham from Metropolis in order to help the GCPD maintain order in Gotham, as if that has ever helped. This only lasts one page — already, we can see that the story jumps around a bit too much. It then continues to Wayne Manor, where it seems even a funeral reception is a catered high society get-together. Kate and Bruce end up standing outside and talking for a while — and this is where the art starts to get really wonky. It begins in a panel where Bruce makes a face that looks a bit like the Yaranaika meme (you have to see it to believe it), and it ends when…well, it really doesn’t end. The faces start to get a bit more mismatched and strange-looking from then on. The inner monologue also starts to get a bit more bland and corny — things like “I’m more of a ‘bring the fight to the bad guys’ kind of girl” and “I’ll be back before breakfast.” Not that they’re bad lines, they just don’t have as much depth as is usual for Batwoman. There’s also yet another strange discrepancy in the art — when Kate looks in her compact mirror, her reflection looks as though it were painted with oils on canvas by a classical painter while everything around it is simple and hardly even shaded. It’s inconsistent and a bit difficult to look at.

During this time, she has so far managed to sneak out of her house despite her father’s wishes and steal one of Bruce’s motorcycles, in hopes of doing “soldier things,” as she said to her dad earlier (patrolling and maintaining order, really). As she races off on Bruce’s motorcycle, the story jumps to Maggie Sawyer, who has just arrived in Gotham. Once again, this only lasts one page before jumping to a jewel robbery in progress that makes absolutely no logical sense. The redeeming quality of this is that one of the three robbers, who appears to have just been dragged into the whole mess, actually realizes how utterly absurd it is. He says “I dunno about this Charlie. Shouldn’t we be trying to steal, I dunno, like, bottled water or a generator or sumthin’? What are we gonna do with jewelry in a hurricane?” 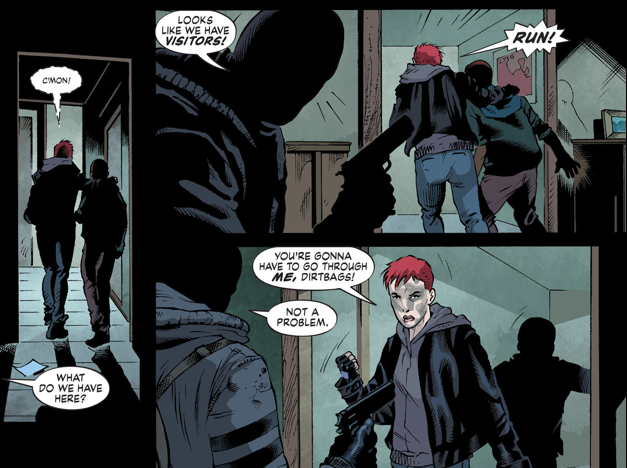 “You’re going to have to go through me, dirtbags!”

Naturally, a page or two after they break into the building, Kate notices and goes to check it out. She discovers a boy in a paradoxical room that seems to change from panel to panel and helps him escape, but not before the thieves notice her. “You’re gonna have to go through me, dirtbags!” she yells, shaking her fist with all the cliché she can muster. They try to attack her, she defends herself, and then proceeds to escape in the most life-threatening way she possibly can — by jumping out the window  and shooting out all of the glass in the conveniently large skylight of a conveniently-located indoor pool. She lands in the water, but is then shot at by the criminals, one of whom grazes her with a bullet (even though the myth of getting shot in the water was already busted by the Mythbusters years ago, as well as the myth that someone could survive a fall like that in the first place if they landed in the water). It’s here, while she’s drowning, that she says my absolute favorite line in this entire comic: “seemed…like…a better idea…in theory.” Keep in mind that her theoretical “better idea” was jumping out of a skyscraper and landing in an indoor pool.

The story meets up with the flash-forward page at the beginning of the issue, and the thieves, who have somehow made it into the same building she’s in, pull her out expecting her to be dead. Shortly after one of the thieves pulls her out and says another completely absurd line — “Oh man, I’ve never touched a dead body before!” — she gets up, tells him “you still haven’t,” makes her own Yaranaika face, and then proceeds to beat the living crap out of them. Not long after she knocks them all unconscious, the police arrive, and Kate meets Maggie for the first time — with Maggie pointing a gun at her back.

One of the many strange faces in this issue, directly from the uncanny valley of slightly disproportionate artwork.

Of course later on everything is reconciled, they realize that she saved a little boy, her dad gets pissed at her for leaving the house but quickly gets over it, and they all live happily ever after (if you could call it that). The story is enjoyable and has an action-packed ending, but put frankly, it is weak and lacks any substance. There’s not much development in Kate’s character aside from the fact that she seems a bit more immature, and the plot has more holes than Swiss cheese, more of which seem to appear the longer you think about it. Not only that, but the paradoxically-arranged artwork detracts tremendously from the story — the issue features four different artists and two different inkers, and the rushed nature of the comic is expressed in that as well. There are disproportionate faces, backgrounds that change, and inconsistencies in the style and panel flow that make it difficult to decipher what’s going on. There is an awesome concept behind this story — showing how Maggie and Kate met is a really good idea — but it just wasn’t pulled off in a way that made sense to the reader. Unlike the 24 issues before it, this issue more closely resembles an episode of a cartoon that anything else, and a poorly animated one at that.

Overall, Batwoman #25 is still a fun read, especially when you look at it from a satirical perspective, but its rushed conception has stripped it of any depth it might have had if Andreyko were given more time to think about it and if the art were much better. For now, all we can do is wait until #26 comes out next month and hope that it’s a bit more consistent.