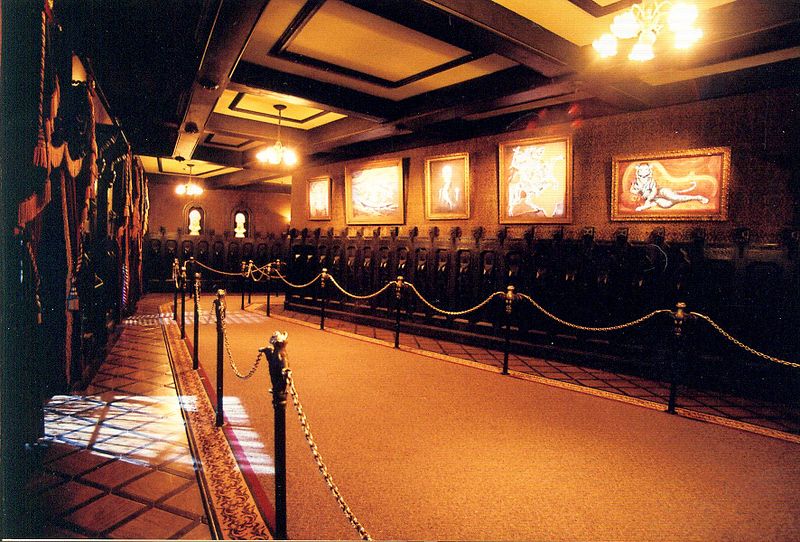 Ever been to Disneyland? I love Disneyland and there’s a ride there that a lot of people, myself included, really, really liked. That ride is the Haunted Mansion, a tour of the titular haunted mansion where the paintings, noises, and other things would screw with your mind. I haven’t been back to it since I was a child, but I remember thinking it was the coolest thing ever. I mean Disney is up there with Batman for me in terms of childhood loves that I kept well into adulthood. So, naturally when I see another beloved childhood fantasy mixed with each other, I’m drawn to it like Disney is toward money. See, there was a particular part of the ride that a lot of people recall, and sticks out. The stretching paintings, that reveal that the originally classy looking portrait is actually pretty messed up. So, someone had the bright idea and said, ‘What if this were the Haunted Arkham Asylum?’. Just like that, we see the four portraits from the ride but made as Batman as possible. The results are awesome.

Artist Abraham Lopez lovingly recreates these old portraits and makes them tributes to Batman and his rogue’s gallery that end up being thrown into Arkham Asylum all the time. Harley Quinn looks like a a classic Victorian woman in a mask, but she’s standing over the vicious Killer Croc on a wire. Joker is hanging out with Scarface, and drinking a glass of milk, but he’s forgotten his pants and the fact he’s standing on a lit barrel of TNT. So you know, just another regular day for him. Poison Ivy is resting on a tombstone with Ra’s Al Ghul’s bust on it, enjoying the fact that ivy is growing up it. Probably because no one ever visits a grave for a man who never stay dead. The last one is my favorite, it’s Batgirl, Nightwing, and Batman all in a totem pole sitting on top of the other while Batman sinks into a quicksand trap made out of Clayface. It’s the expressions on it that really get me, Babs is happy, Dick is panicking, and Bruce is being Bruce. I’d really love to see a done up version of the Haunted Mansion ride, but all Batmanified, but for now, this’ll have to do.

Tags:artBatgirlbatmanclayfaceDisneyharley quinnjokerScarface
share on: FacebookTwitter Tumblr
previous article
Is Another Robin Coming?
next article
A New Scribblenauts Game is Coming; It’s Bringing The DCU With It