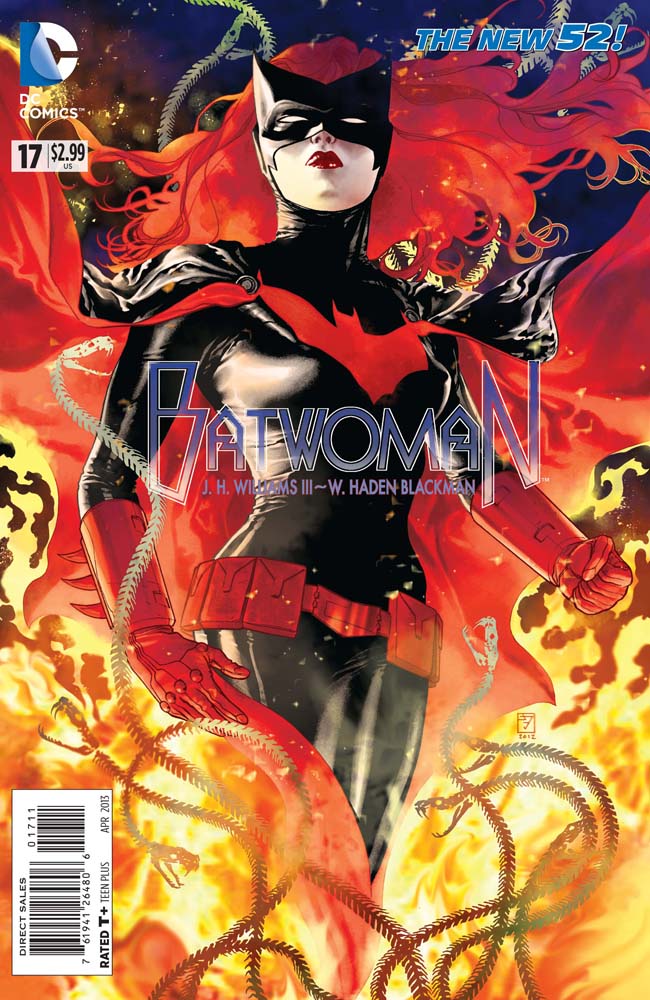 Batwoman #17 was a pretty big deal for fans of the character. Kate Kane has revealed her secret identity to her girlfriend, and proposed to her, as well as hinting at the return of Alice from Williams time on Detective Comics, as well as the revelation that Director Bones is Kate’s brother. With all these new shifts in Batwoman’s status quo, CBR decided to have an interview with Williams about Batwoman, and where the future of the title will take her. With the return of Alice, Williams had this to say.

Haden and I were pretty gun-shy about dealing with Alice in any real way for a while, but needed her presence felt, the impact she had on Kate’s life to resonate from the beginning. So we literally boxed her in that sarcophagus, revealing it way back in the original issue zero. This kept her isolated from any explanation needing to be shown until we were ready. No outside story elements affecting what Alice may’ve been doing this entire time. Only that the memory of her and the past would haunt Kate, affecting her choices. As we started fully figuring out was going make up the bulk of arc 3, about half way through that is when we decided we should reintroduce the sarcophagus at the end of the arc, and have it open to reveal Alice. The timing felt right, especially with Kate making such a major life changing decision. It was the right time to bring her crazy sister back, a perfect lead-in to bring family back strongly into the next story.

However, Alice’s return was not the biggest bombshell to hit the pages of #17, but rather Kate’s decision to not only reveal that she was Batwoman, but to propose to Maggie Sawyer, a long time supporting character in the DC universe not only for Batman titles, but in Superman titles as well. Williams talks a little about why they did the reveal, and where it’ll take the couple in the future.

Yeah, Haden and I are super excited over this new direction for Kate and Maggie. We love that Kate did the proposal and revealed herself to be Batwoman all at once. It’s like she is saying to Maggie, “You want to know what I’ve been doing, who I am, this is who I am, will you still love me?” We’re planning this to be a prolonged story. The couple has a lot of issues to work out between them, and they both have baggage from other relationships that they bring to the table. It’s not going to be easy. This is the more natural progression to take considering the lives they lead, how that will affect them on a daily basis will be profound…They are going to slowly turn into a much stronger couple. The fascinating part of this is the fact that Maggie now knows all of Kate’s secrets. And exploring just how much Mags gets pulled into Batwoman’s world will be a long, exciting journey. It will become much more immersive over time for Maggie, and how she and Kate deal with it is what we’re interested in diving into.

Now, in comics, when a homosexual couple gets together, especially a high-profile one like Batwoman and Maggie Sawyer, there’s normally a lot of fanfare and attention to be had, as seen with X-Men’s marriage between Northstar to his boyfriend last year.  There was no surprise to be had for the readers, as Marvel had advertised it greatly. Williams said that the surprise was on purpose, to add to the impact of the arc’s conclusion.

The surprise for the readers was a key factor. Let everyone else catch up. And it made the scene feel more honest when people read it for the first time. Which was really great, because we had planned this well over a year ago. But because there wasn’t a super pre-hype machine on it, it comes across very naturalistically. An evolution of the story and characters, not a cheap publicity stunt…It was surprising because I had expected a PR push, but like I said it became apparent quickly that it worked in our favor that nothing was spoiled for the readers. It gave them an unexpected jolt, shaking them up emotionally. The issue got picked up by outside media regardless of PR, Reuters and Huffington Post, to name a couple. I love that because there is nothing worse than building up something that is important to how a story impacts the reader, ruining the moment for them is the worst thing you can do. I do despise spoilers. PR works best if it can tease efficiently without just blurting crap out. So even though we did not prime ahead of time in this instance at all, it turned out just fine, and gave it all an honesty and power that the scene much deserved.

Not only does Batwoman have a new fiance, but her old partner and cousin Bette Kane has returned as the hero Hawkfire.  While Flamebird was seen as Batwoman’s “Robin” of sorts, Hawkfire will fill more of a cross between Nightwing and Robin in the sense she is Batwoman’s partner, and her equal.

Yeah, this was another exciting element for us. Another building up story to carry across the series over time. Although Bette (Hawkfire) partners with Batwoman to a degree, we don’t really see her in the same way you might see a Robin. We see her as someone who is learning to stand on their own, to become an equal to Batwoman someday. But yeah, she still has psychological damage from the brutal assault by The Hook, and nearly dying. This will haunt her for some time, but it has also taught her to not take this gig so flippantly. She now sees what she does, and her life, from a new perspective that will allow her to continue evolving.

Bette however, is just one part of Batwoman’s ongoing family drama.  Among her other family issues such as her Father, her reconciliation with Bette, and getting married, as well as her possible brother, family will be front and center as the title moves on. Williams also looks at how Kate, a satellite member of sorts, fits into the Bat-family in the issues to come. She will be teaming up with Batman and the death of Damian Wayne will have some bearing on how the Batman reacts to her during a “team up” of sorts between the two later on.

Yes, it’s almost going to be a family drama story. What is good about the timing of this is that also during the story we’re going to really get into the meat of defining Batwoman’s relationship with Batman much more profoundly than before. We’ve dropped clues back in arc 1 about what is coming, and it all kicks into motion in issue #18. So while this arc deals with Kate’s personal family, we’re going to define her role in relation to the supposed “Bat-family…But the arc in general will have strong implications on Batman and how he views Batwoman, and vice versa. And yes, the death of Damian may be impacting his judgement during this story.