DC Collectibles has showed off some of merchandise at one of their panels at the New York Comic Con . Here are some highlights so far .

Superman companion line to the Black and White line. Lee and Vincent talk about the project and past projects. They talked specifically about the cape .

Jim Lee talks about drawing the legs back on for Superman (taken from Action Comics).

Batman TDKR Call to Arms Statue is available in 2013. The detail is amazing, even the stubble on Batman’s face! 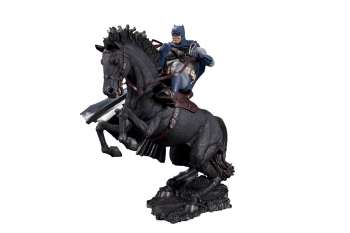 A seven pack of the Justice League action figures are available for $99.95 and $10 of every sale will go to the We Can Be Heroes campaign. Don’t forget to text Heroes to 80888 to give $10.

Here’s a DC Collectibles first look! Arrow Icon Statue available April 2013. This is very accurate to the show, which premiered last night on the CW.

Also, the 3 3/4 inch line continues with John Stewart and Atrocitus, also on sale at Graphitti Designs.

For the first time, you can buy at the DC Booth! Stop by to see what’s available. Plus, we’re handing out coupons. Stop by for $10 off.

Batman Arkham City four pack is available in March 2013! Check out the DC Collectibles page on October 31st for the Spoiler Alert that will show off the fourth statue. See the other 3 below…

We will be sending you more info as it comes available .