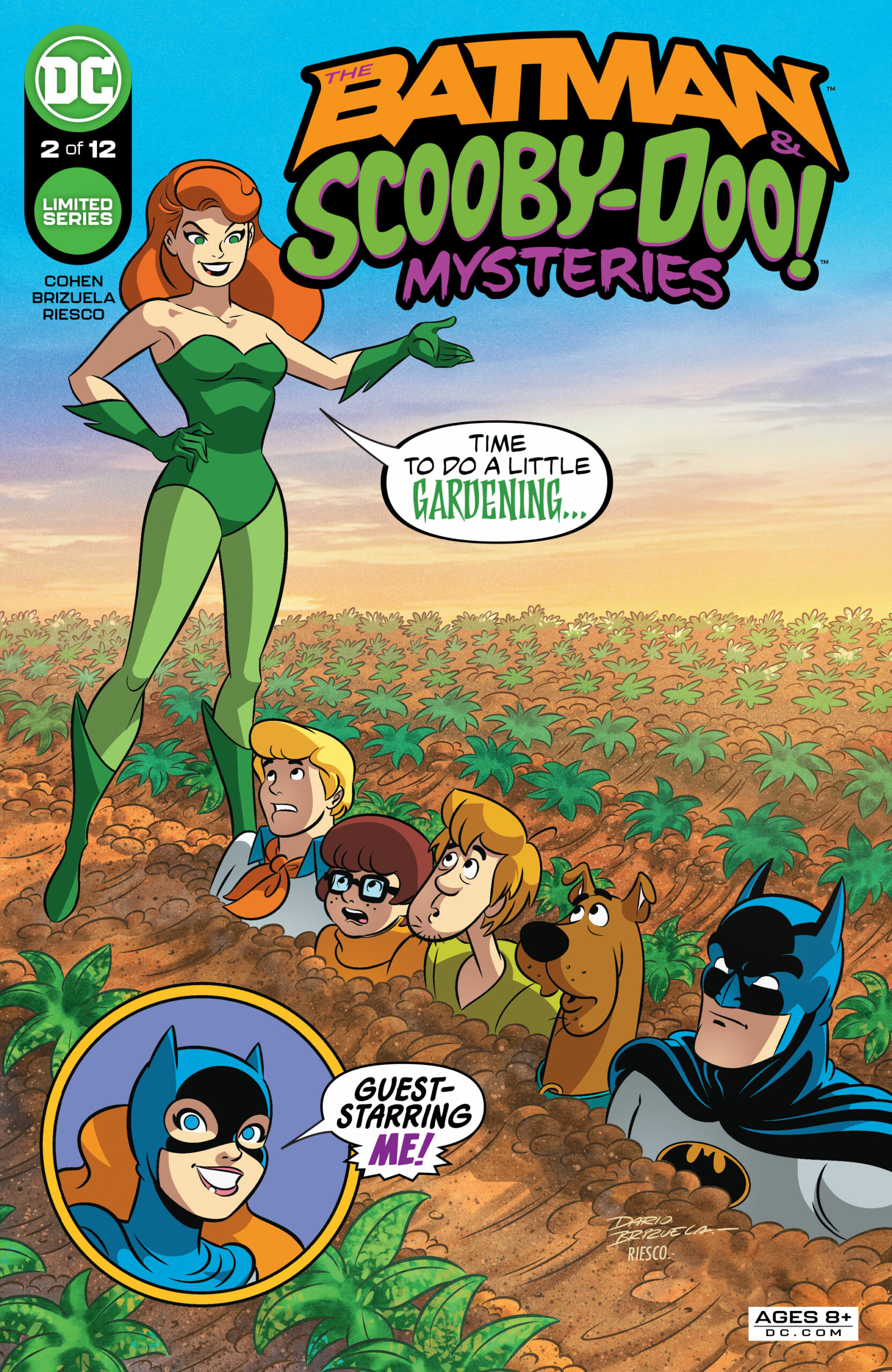 Let’s go! My favorite combo mystery solving team is back in The Batman & Scooby-Doo Mysteries #2.2 and I’m obviously stoked.

Genuinely, this series is such a fun fusion of some of the best comic and cartoon characters that many of us have grown up with and love. This issue in particular made some of my biggest fangirl dreams come true with the teams becoming more integrated than ever before.

You’ll see what I mean if you read on but beware spoilers! 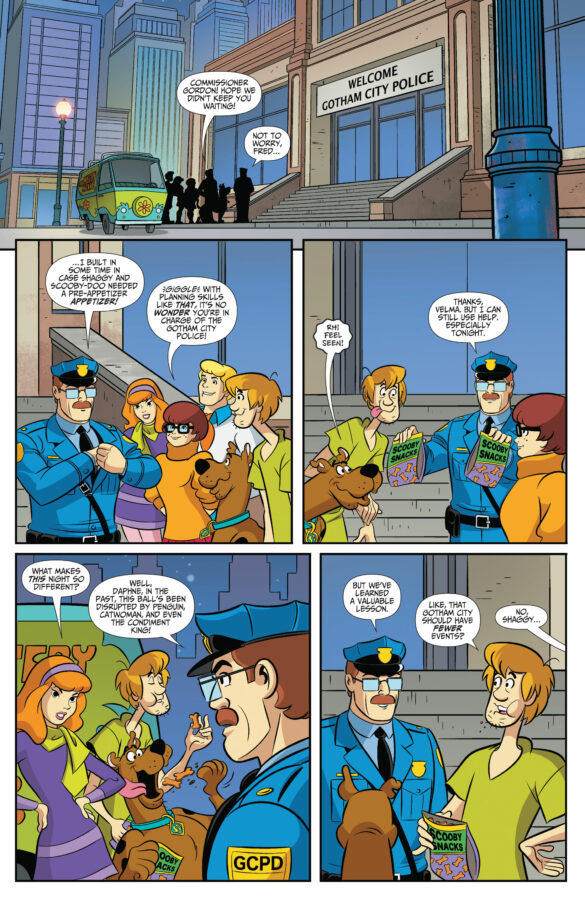 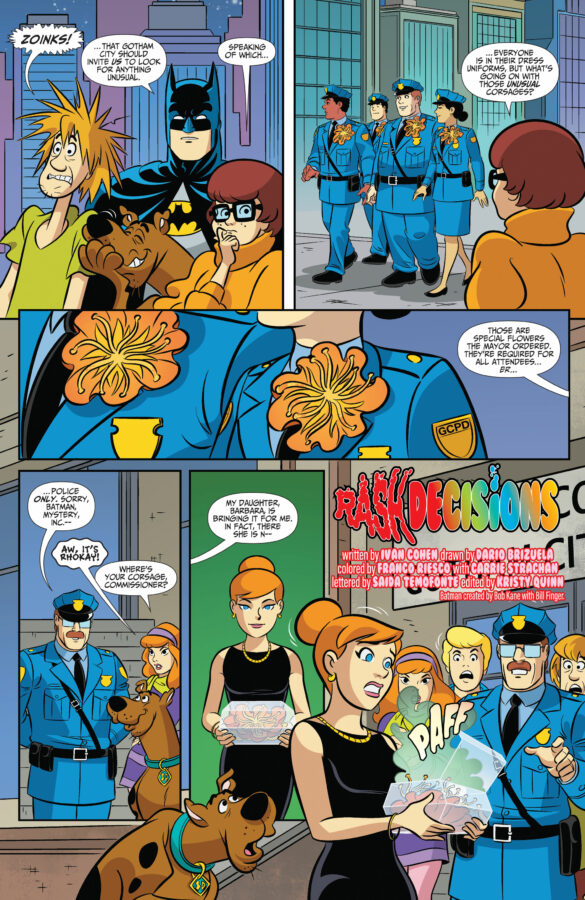 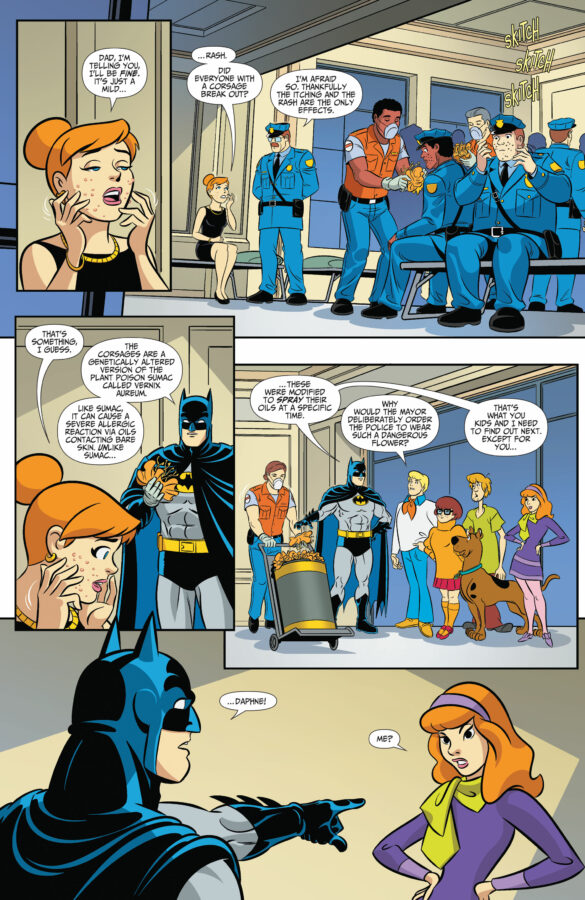 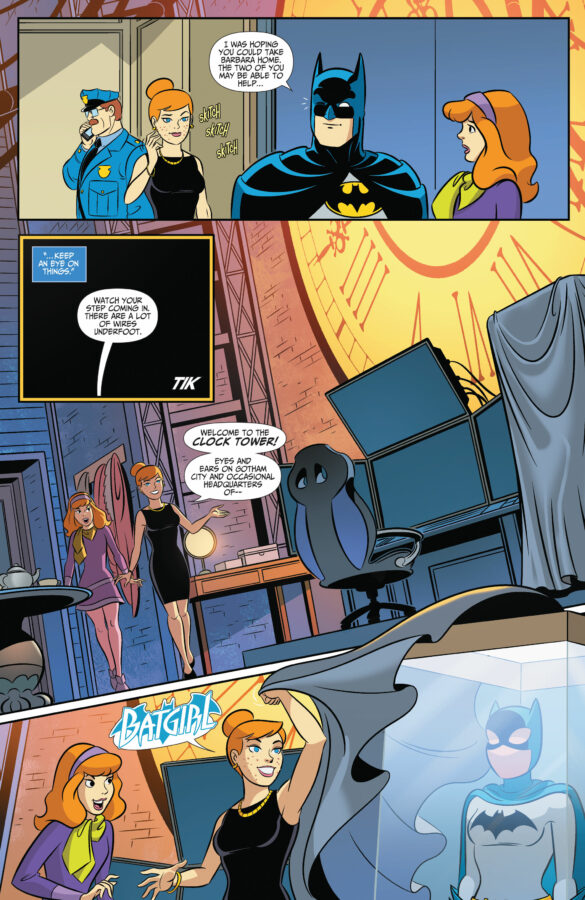 Inspired by a kind wizarding family of a famous franchise, I always wanted to be a redhead as a kid. I don’t know what made me want that so badly, but I never saw being ginger as a bad thing. As such, The Batman & Scooby-Doo Mysteries delighted me this week because we got three awesome redheads in this story! Obviously, the series’ resident, fiery-locked sleuth, Daphne Blake, was present, but in an unprecedented role. Daphne teamed up with Barbara Gordon for a unique mission as Batgirl while Gordon stayed back as Oracle. Of course, these fabulous ladies faced off against Poison Ivy!

Honestly, what’s not to love about this turn of events? Daphne getting to play superhero for an issue was kind of perfect and the sort of fun I wasn’t sure The Batman & Scooby-Doo Mysteries would ever give us (props to Ivan Cohen, as always). I also really loved Poison Ivy’s inclusion among these gals. Ivy has always been shown to be quite intelligent, so reading how she almost outsmarted some of the best crime solvers in DC history made me very happy.

This issue also gave us a ton of feminism with a female mayor of Gotham City and just general woman [email protected]$$ery. The one thing that just generally made me cringe however was one little panel where Velma giggled? I know it was just supposed to be her laughing at Commissioner Gordon’s joke, but it felt almost flirty, which is especially weird for a multitude of reasons… but I digress.

The Batman & Scooby-Doo Mysteries #2.2 is my favorite kind of comic book fun. Goofy, lighthearted, and wrapped up neatly in just one issue. I have discussed in previous reviews how much I prefer Ivan Cohen as this series’ writer, and this continues to be true. Sholly Fisch’s work has always been alright, but I feel like he just doesn’t have the same understanding of the characters as Cohen does (Velma giggle aside). Cohen’s storylines exhibit a good grasp of both the heroes and villains in the series.

None of Mystery Inc. feels too childish and they are consistent to their cartoon counterparts from over the decades. Batman, while still incredibly clever and flush with new/rare/impossible technology, is not impossible to relate to, by either the reader or the Mystery Gang. Many of Batman’s villains are… lacking in intellect, to say the least. However, this makes sense and aligns with basics about the characters, that even less experienced readers can feel familiar with. Cohen also doesn’t let his stories get too convoluted or complicated, which makes his issues far more straightforward and enjoyable.

I can’t speak to how Cohen or Fisch are as creators for other series, but I can confidently say that for The Batman & Scooby-Doo Mysteries at least, Cohen has been my preferred writer. I just hope I don’t get disappointed now that I’ve put my faith in him for the series. Seeing as the two writers generally switch off issues like a two-player game of hot potato, I know that I need to be more open minded about Fisch’s future issues in the writer’s chair. 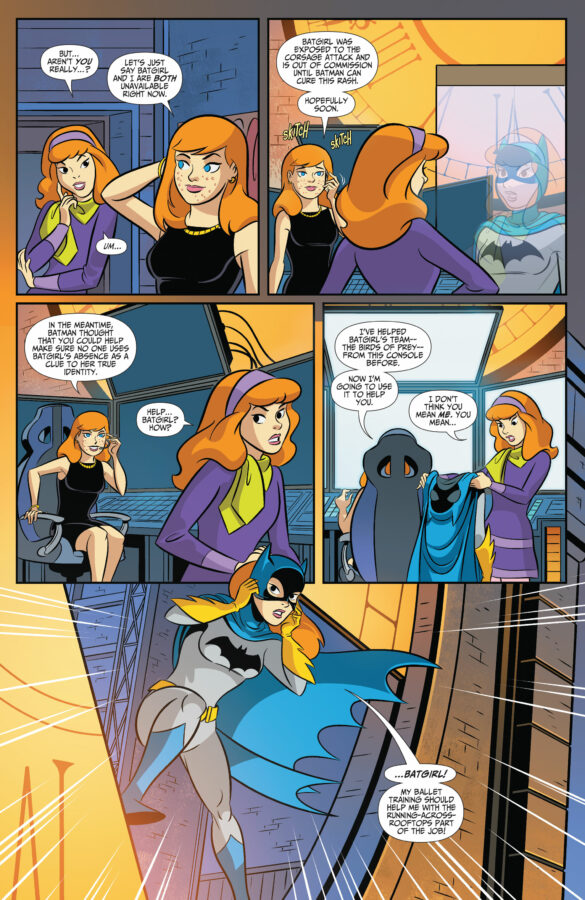 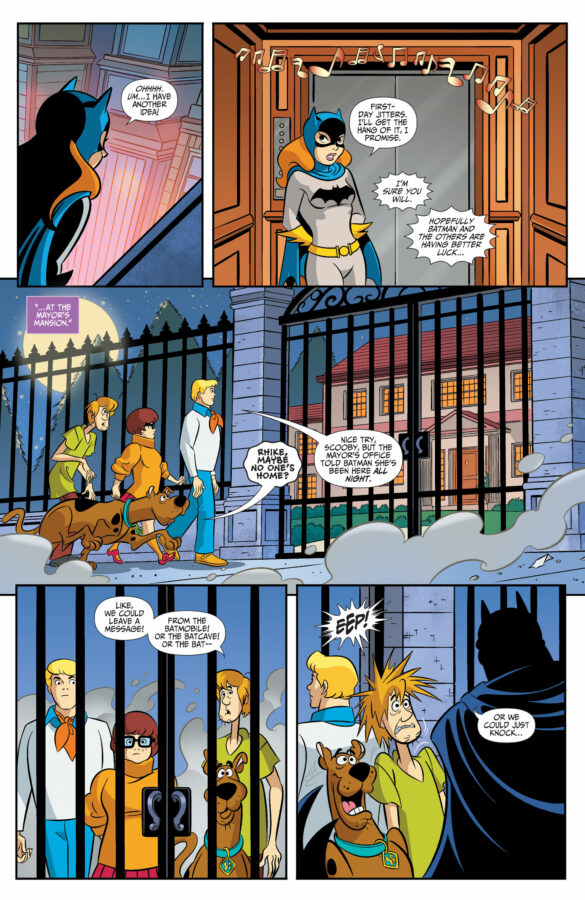 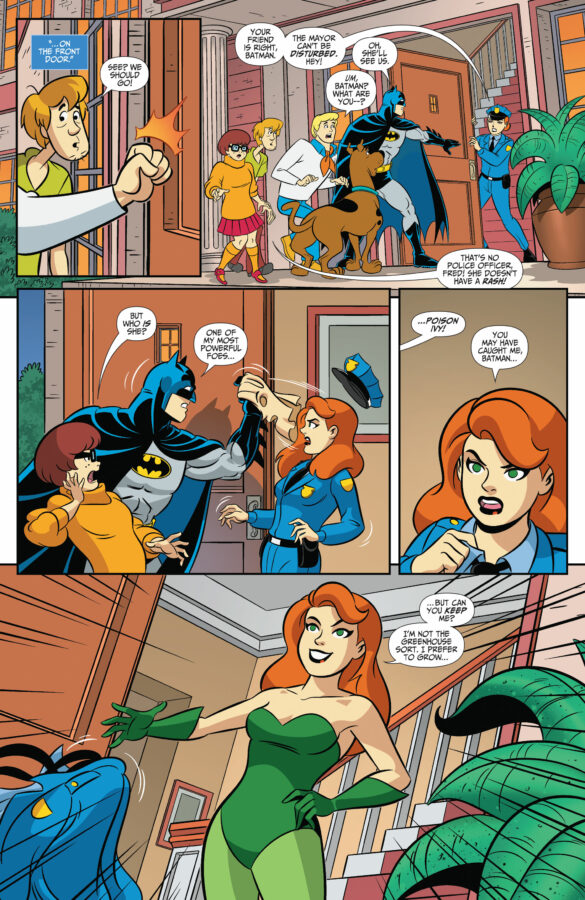 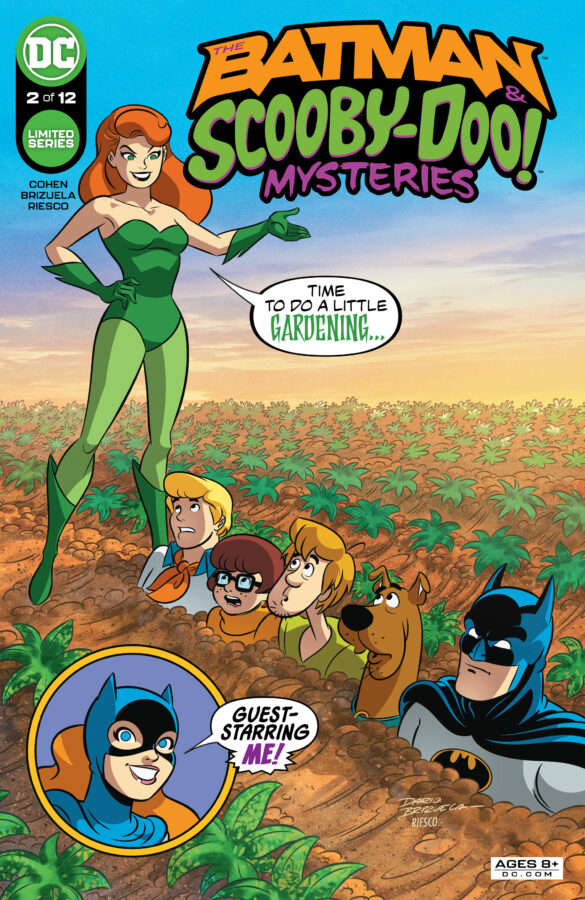 Truly, there’s not much more to say about this issue. This is an excellent, near perfect outing for the team behind the series. Still, I’m giving The Batman & Scooby-Doo Mysteries #2.2 a perfect rating, despite some personal preferences (yes, the Velma giggle, but also the random tomato henchman who doesn’t return?) There’s the usual Scooby and Shaggy food related hijinks, Batman and Velma being brilliant together, and Daphne gets to team up with another strong woman like herself. The only one who has barely a feature in any panels is Fred, but hasn’t he always been everyone’s least favorite member of Mystery Inc. anyway? He’ll be fine.

Seriously, I know my job as a critic is to be, well, critical, but this issue is like a genuine cartoon on the page. I can almost see in my mind’s eye what the panels would look like animated together. This issue is just that good.

I’m truly glad that the series is anything but mediocre. Sure, these stories aren’t going to teach you life lessons or inspire a massive cinematic franchise. But why does media have to be “serious” all the time anyway? I’m grateful for this little comic and the little bits of escapism to my childhood it provides. I’m sure it will continue to be a brief but lovely departure to youth for us all.