“Dark Crisis Of The Soul“ 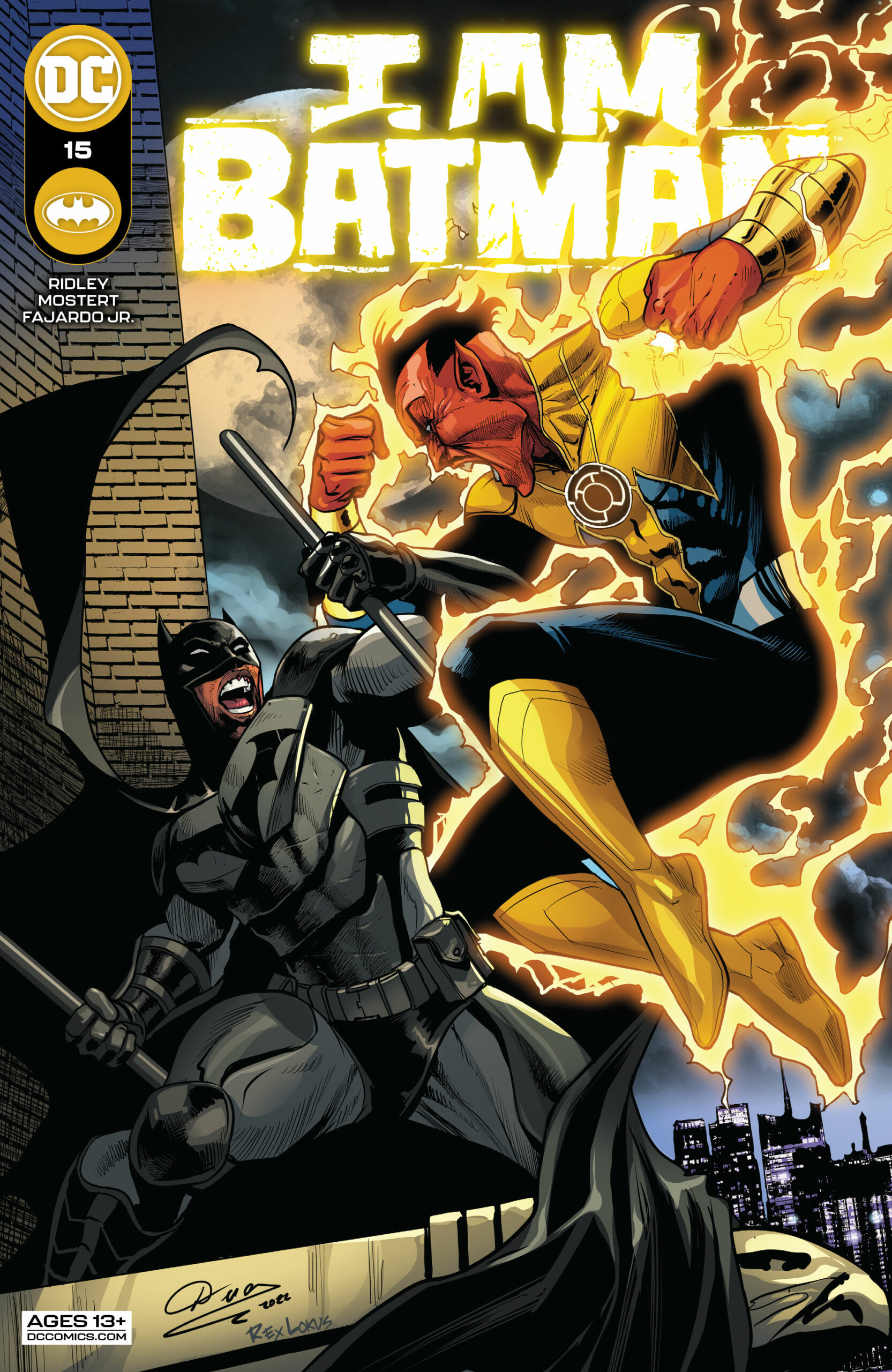 I Am Batman #15: A Dark Crisis tie-in issue! When Jon Kent first asked Jace Fox to join the new Justice League the answer he received was a firm “no” but, as Deathstroke and the Legion of Doom hunted the heroes of the DCU, Jace learned the hard way that there are some fights from which Batman cannot run, and the only thing he has to fear… is fear itself!

So far, Ridley has kept Jace’s adventures in I Am Batman somewhat separate from the rest of the DCU. Even in the earlier issues set in Gotham, Jace didn’t really interact with the Bat Family. The only notable interaction he’s had with other DC heroes or villains is the Question’s guest appearance in the previous few issues. 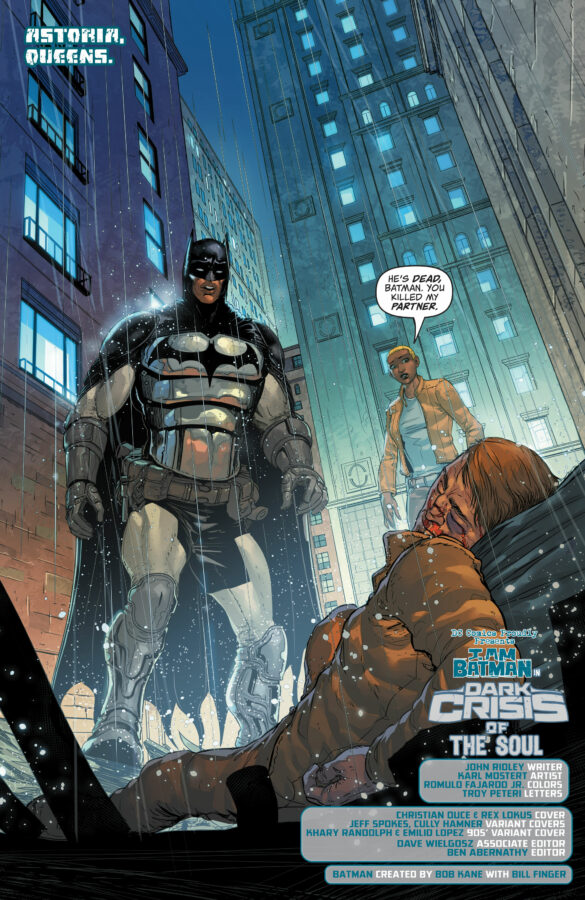 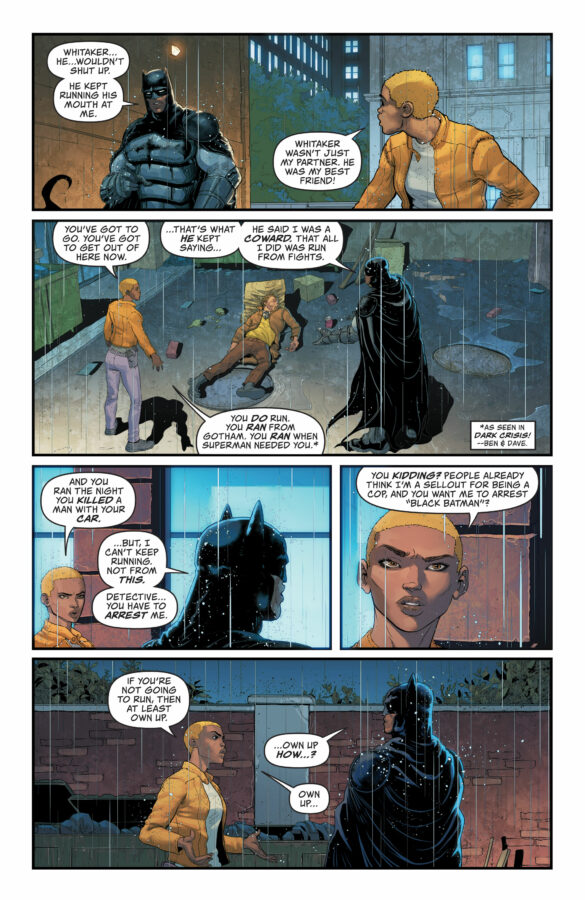 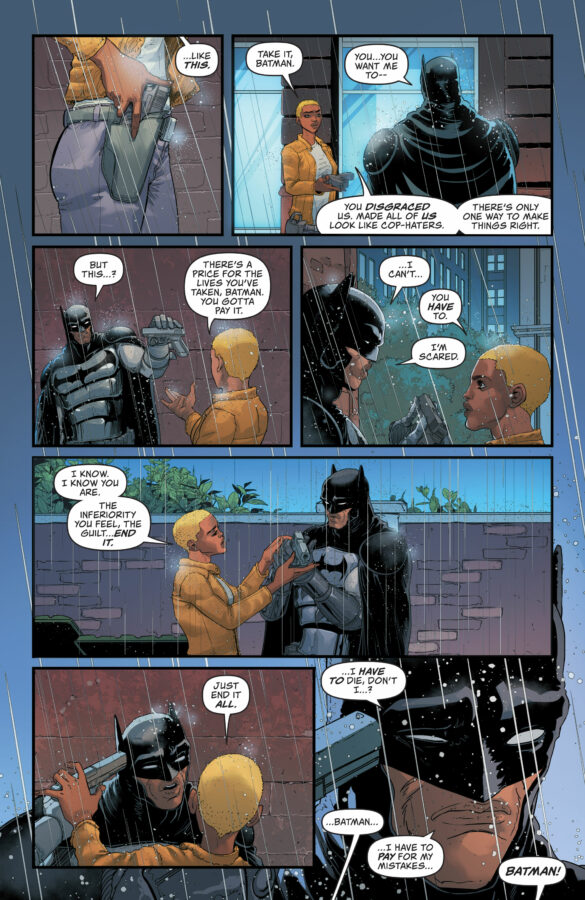 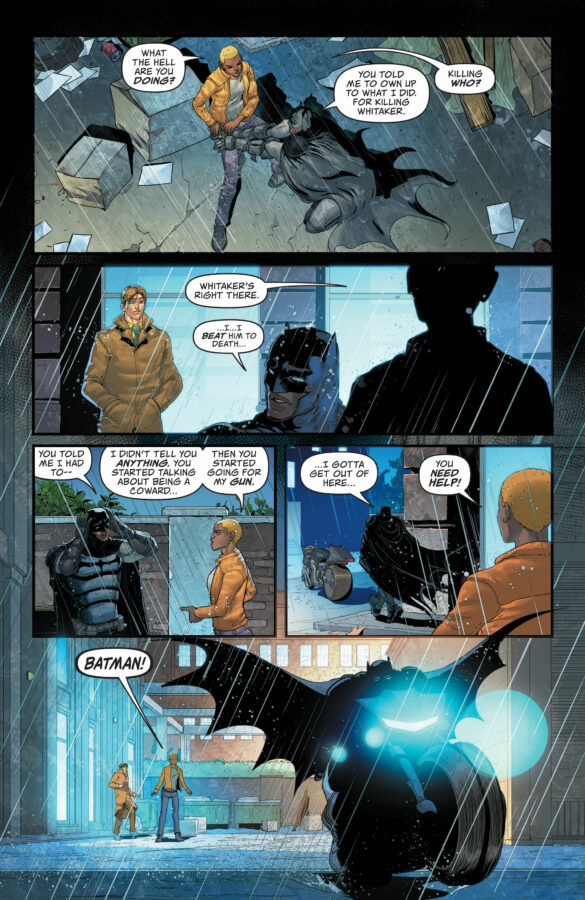 Now, Jace takes his first steps into the wider DCU with I Am Batman #15 being a tie-in issue to the Dark Crisis on Infinite Earths event. In issue #1, we saw Superman (Jon Kent) attempt to recruit Jace into a new Justice League. However, Jace rather brusquely rejected the offer, telling Jon:

The last Batman to team with anyone died. Go ask one of the Robins.

However, Jace’s refusal to go with Jon to fight in the Dark Crisis proved futile, as the war instead came to Jace. Deathstroke put out contracts on any active superheroes, and Sinestro was been assigned to take out the new Batman.

In the last issue, Jace got into a heated argument with Detective Whitaker and apparently killed him. However, Whitaker had a strange yellow aura about him, so Sinestro’s presence explains what’s going on. The whole encounter is revealed to be an illusion designed to drive Jace to take his own life.

Sinestro seems stronger than ever, with his powers bolstered by the Great Darkness. On the face of it, this is a villain that could kill Jace easily, and he demonstrates to Jace just how easily he could do it… but Sinestro doesn’t work that way. Instead, the Yellow Lantern uses his new powers to psychologically manipulate Jace into giving in and ending his own life.

The actual fears that Sinestro confronts Jace with are very illuminating. They give insight into Jace’s psyche and the forces that drove him to take on the identity of Batman. First off, Sinestro makes Jace think he’s killed Whitaker in a moment of anger. This suggests that Jace has a fear of losing control of his rage. Perhaps he uses the Batman identity as a release for his anger issues. Of course, all this could also prove to be a hindrance to his crimefighting, if he loses control.

The villain plays on Jace’s guilt to make him feel unworthy of being alive. However, this guilt also motivates Jacee to atone for the harm he’s done, by fighting crime as Batman.

Sinestro also recognizes the strength in Jace’s psyche, as well as its accompanying weakness:

You’re not afraid to die, are you? Your lack of regord for yourself, that’ like… your little superpower. And self-doubt is your weakness.

It seems that Jace has the fearlessness characteristics of a Green Lantern, but his self-doubt could prove his undoing. Being a Batman requires total confidence in your own abilities. Thus, this flaw might be the most dangerous chink in the new Batman’s armor.

Sinestro attacks Jace’s self-doubt by putting him face-to-face with a vision of the original Batman, Bruce Wayne, who calls Jace out as a pretender. Jace tells the illusory Dark Knight that he’s not the real Batman. The reply is a cutting,

Neither are you. You were afraid you couldn’t make it on your own, so you stole Batman’s name, appropriated it, just so people would pay attention to you. Desperate. Pathetic. The opposite of heroic.”

Not only does this cut to the heart of Jace’s own doubts about his taking on the identity of Batman, but it also has a meta-level about Jace as a character. Some readers take exception to the fact that Jace was a relatively random person who just decided to take Batman’s identity for himself – with no regard for the fact that the original was still using the identity. Jace and John Ridley have the same problem: having to justify Jace’s being Batman. So far, I believe Ridley’s succeeding, but it remains to be seen whether Jace himself will be successful in the DCU.

The new Batman’s final decision could prove a big step in him ever being accepted by other heroes as New York’s own Dark Knight. When Vol suggests that Jace seek out Superman’s help against Sinestro, he vetoes the idea, feeling that he doesn’t deserve Jon’s help, due to his own refusal to help Jon.

When this started, Superman came to me. He told me he needed my help resurrecting the Justice League. All I did…  I just blew him off. I told Superman all that Crisis nonsense wasn’t my issue.

Jace’s encounter with Sinestro has taught him the lesson that he will need to interact with the superhero community and help them whenever he can. If he can make friends and allies among the other heroes, he could earn the right to call on them for aid with threats he can’t handle on his own. Because of this, I Am Batman #15 ends with Jace heading off to join Superman and the other heroes in facing the Dark Crisis. 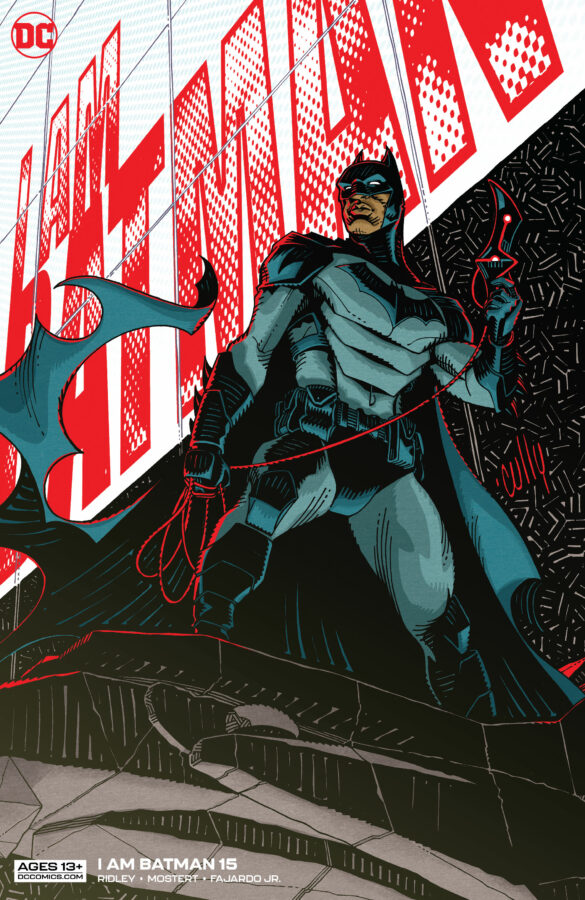 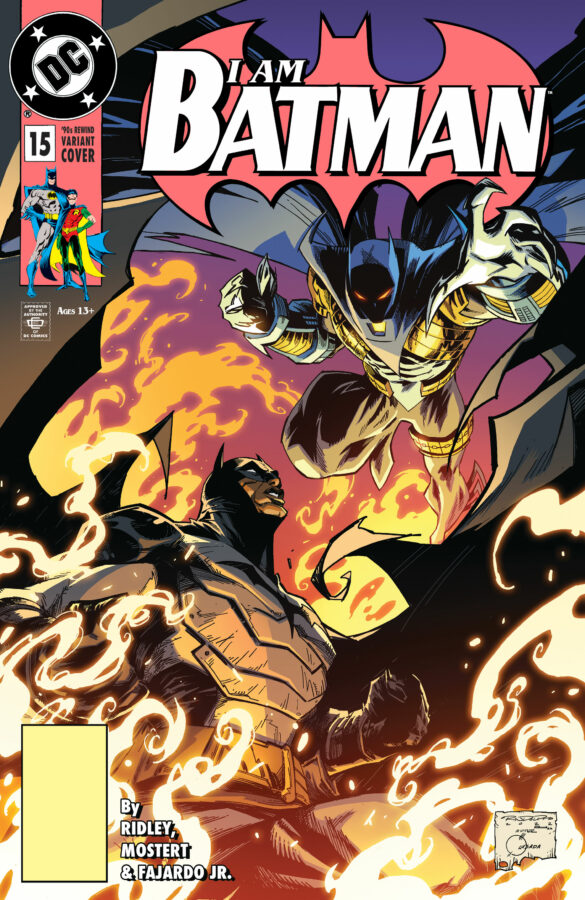 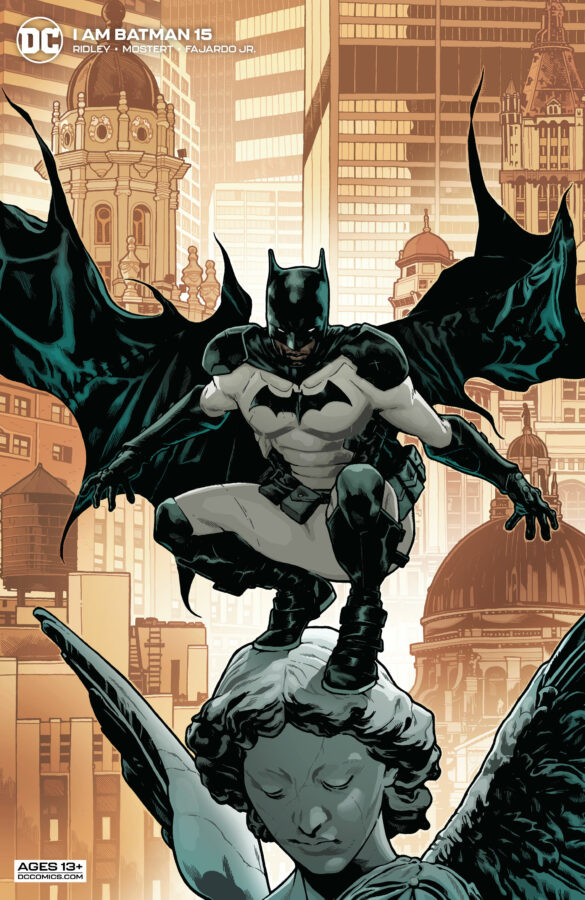 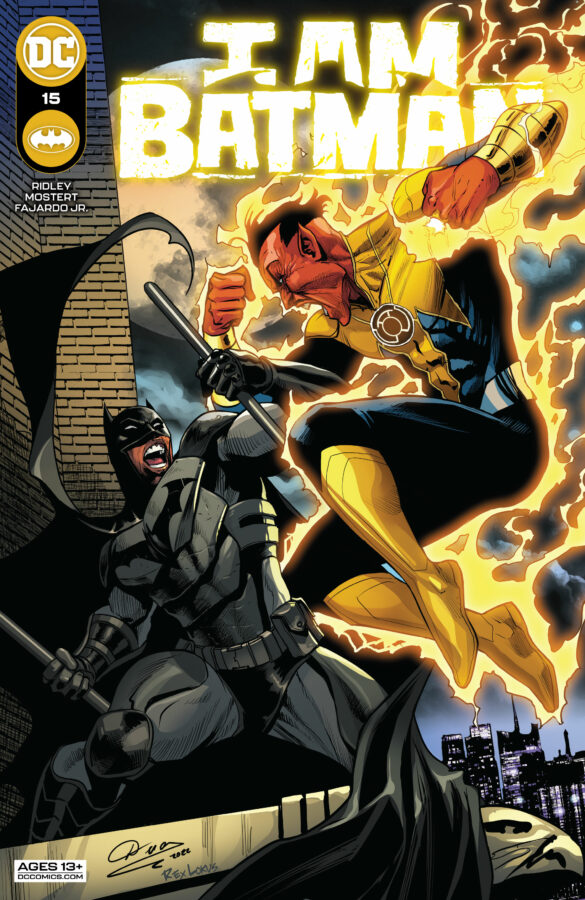 Event tie-in issues can often be quite lackluster. There’s a temptation for the writer to just copy their character’s scenes from the event title, except from the character’s point of view. However, Ridley avoids this temptation. Instead, he provides a story that’s separate, but still connected to Dark Crisis. He takes the opportunity to relate an important step in Jace’s evolution as a superhero: his first interactions with the wider DCU.

Often, event tie-in issues are rather forgettable, but John Ridley bucks this trend with I Am Batman #15. Instead, Ridley gives us an exciting and thoughtful story that reveals much of what drives Jace Fox to be Batman. On top of that, we get to see Jace taking an important first step toward building relationships with DC’s superhero community.