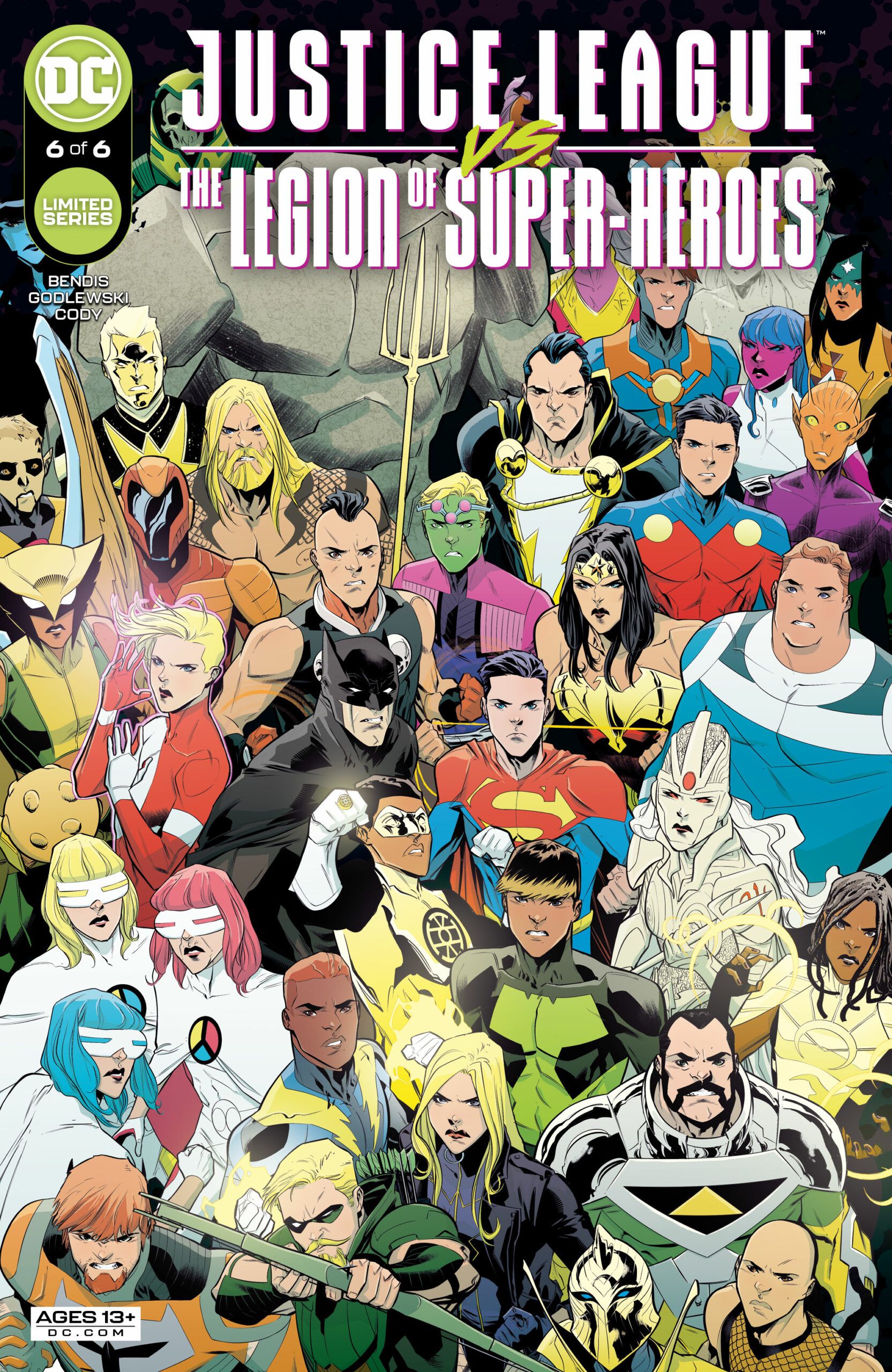 Justice League Vs The Legion of Super-Heroes #6: delivers the blockbuster shocking conclusion to the Gold Lantern Saga.

Which legendary DC Villain is behind this great darkness that is about to destroy all the ages of heroes all at once? Find out right here all this AND the future of the Legion of Super-Heroes is revealed! 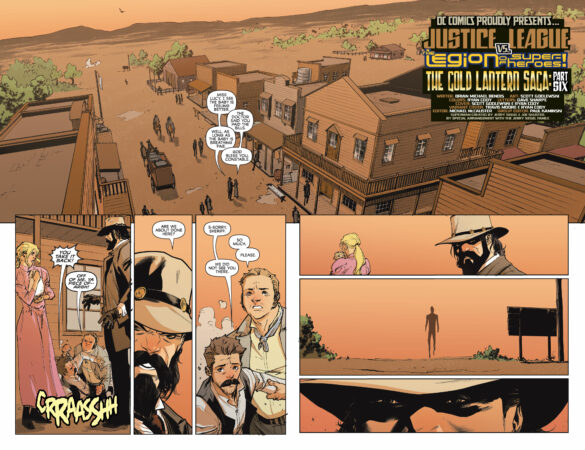 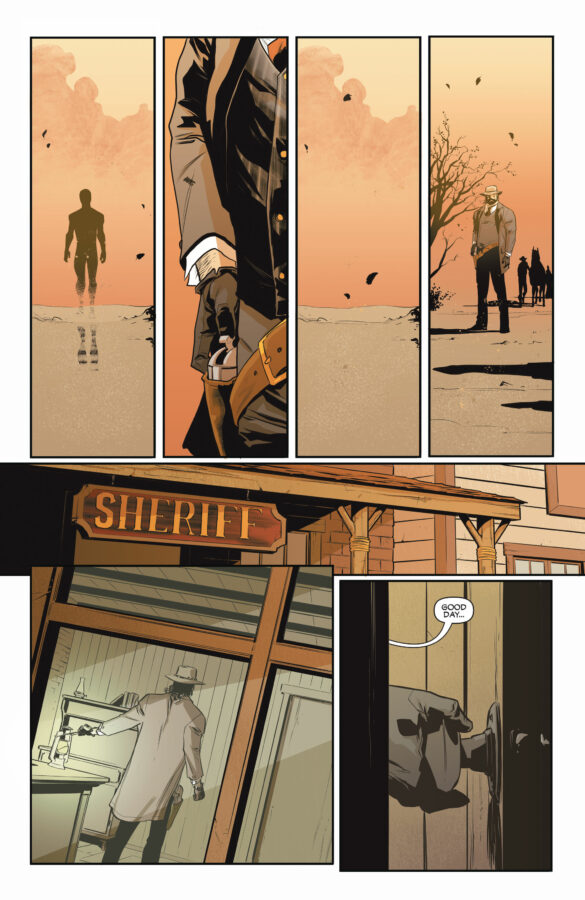 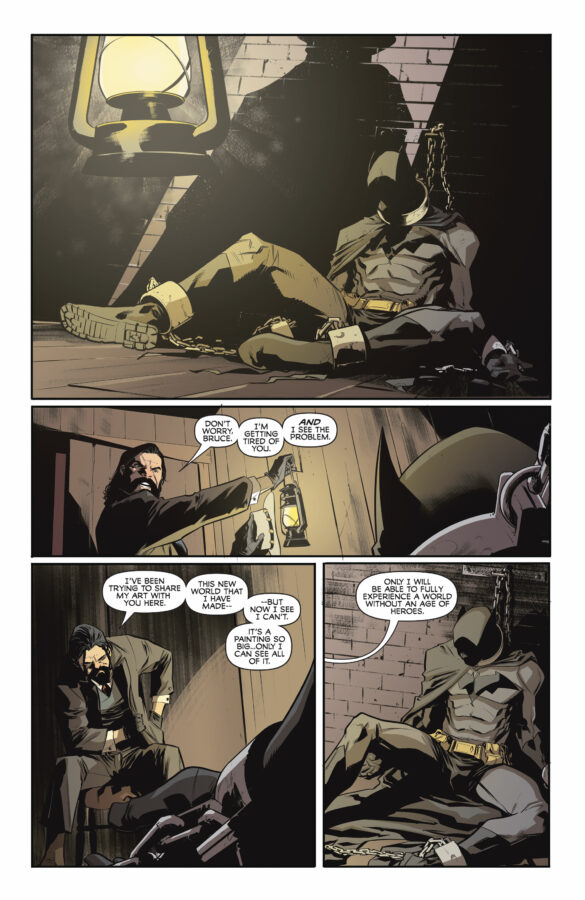 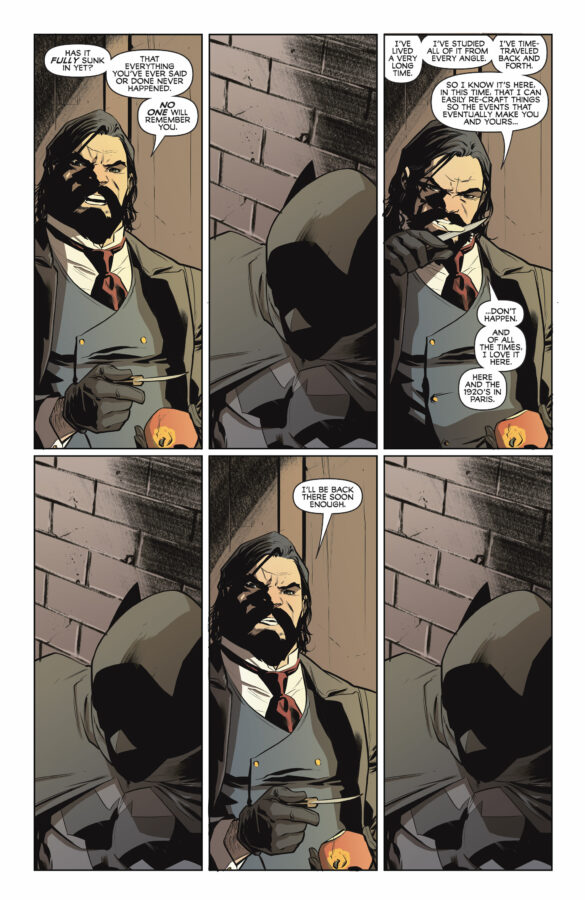 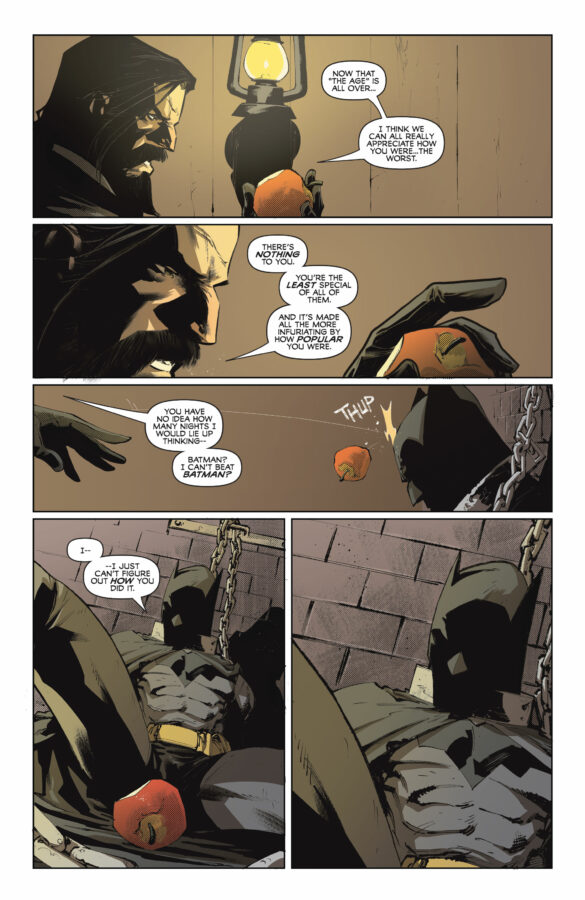 Derek: Can you think of any positives, Matt?

Actually, the smaller moments in Justice League Vs The Legion Of Super-Heroes #6 aren’t bad. Vandal Savage explaining his plan to “Bruce” thinking he’s won, and then the surprise… that’s actually quite good. It’s like finding the one unspoiled apple in the bunch. The inclusion of Jonah Hex is a nice touch and, and then there’s uh… well… yeah, that’s about it. Godlewski does an admirable job of doing what he’s there to do, but he doesn’t have a lot to work with.

Derek: That was a neat bit of foreshadowing. It was clear that there was something up with “Bruce” and Godlewski cleverly drew the cowl as if it were empty. At first, it had me guessing that Batman had escaped and left a stuffed Batsuit to trick Savage. I also agree that it was great to include Hex. There were a number of great cameos in this series, such as Kamandi and Alan Scott. It’s just too bad that Bendis didn’t really do anything with them and they just served as window dressing.

Matt: Of course, the biggest positive is that, with Justice League Vs The Legion Of Super-Heroes #6, this abominable series is over, and with it, hopefully, Bendis’ time at DC. One would hope that the powers that be will see the horrific impact he’s had on the entire DC Comics Universe and that it’s a mistake that has to be actively undone.

If only Vandal Savage was attempting to wipe out Bendis’ tenure at DC, instead of the Age of Heroes. The entire time Bendis has been at DC, the entire line has suffered. One would think it would simply be on the characters he was trying to ruin; Superman, the Legion and the Justice League, but somehow the publisher found a way to create a synergy with the entire line.

I’ve seen online in more than one place that Bendis gets $1000/page. I hope DC considers suing him on some grounds, because at his best at DC, he was never worth more than a couple hundred. It’s a long road ahead for the line, but with books like Nightwing, The Flash, Batgirls and Wonder Woman readers can find some good comics in hopes the rest rights itself. We’re now a far cry from “Rebirth” when it seemed that almost every DC Comic was very good to great.

Derek: I take your point about the ending of Justice League Vs The Legion Of Super-Heroes #6 being a positive, but it would have been better if it had come earlier. It was evident fairly early into this series that it wasn’t going anywhere, and I honestly don’t think most readers would have noticed or complained if DC had just quietly cancelled the series halfway through. I’m guessing the only reason to let him finish was so they could complete a trade collection.

While I agree that Bendis’ work for DC has been overall lacking, I doubt that they’ll take drastic action to right the damage he’s done. It’s unclear whether or not this is Bendis’ final work for them, but I’m hoping it is… at least in any capacity where he’s empowered to change the status quo of any characters he’s writing. I hope that the next continuity adjustment will undo some of his more egregious changes to the DCU and the Superman mythos.

Matt: It’s pretty obvious that the biggest negative here is that the most critical and exciting part of the story happened off panel. That’s right, the united League and Legion defeat the Great Darkness (haha!) in a completely different comic. The writing’s so bad that it genuinely feels like we missed an issue. This finale is all denouement and should’ve been the last half of a final issue.  It’s like a blockbuster film that skips the third act and goes right to the wrap up before the credits.

The really sad thing is that this is not new for Bendis in his DC work. Supposedly, he was a really good writer over at Marvel a while ago… I wouldn’t know, but judging from his work at DC, and in particular, this series, he shouldn’t even be employed as a comic book writer. It’s arguable whether or not Bendis’ dialogue is bad, or his decompression of story is effective, but skipping the resolution because you ran out of pages is just bad writing.

Derek: That pretty much fits with how he wrote last issue. He was messing around for the first 4 issues, flitting from one “cool” idea to the next, losing sight of the core story. Then he had to rush to tell said story with a tidal wave of exposition. He probably figured he was capitalizing on that “success” by doing the exact same thing again with Justice League Vs The Legion Of Super-Heroes #6, too. A commonly accepted rule of writing is “show, don’t tell”. Bendis seems to think that doesn’t apply to “star writers” like himself. His beliefs seem to be that he writes so engagingly and that his exposition is superior to actually including any action in the story.

I feel sorry for Godlewski. DC tapped him to draw a major team-up of DC’s tentpole teams, but does he get to draw much action? No, he’s stuck drawing them standing around talking to each other for the bulk of the series. Lettering all that inane dialogue must have been a laborious task for Dave Sharpe too.

Matt: This leans into editorial at this point. DC gave Bendis carte blanche to ruin their comics, which is utterly senseless.  Any editor with any skill should’ve realized that this story was terribly plotted and scripted. They wouldn’t let a new writer be this bad! There’s a lot more going on than we are privy to, but it doesn’t mean that either Bendis or DC should get a pass.

Derek: The general assumption is that it was Dan DiDio who gave Bendis this carte blanche. I do have to wonder why DC didn’t show the writer the door immediately after DiDio departed. I suspect that there was some sort of contractual obligation to keep him on.

Matt: Just in case you were thinking his dialogue got better somehow, the League and Legion remain uncharacteristically quippy and speak when they don’t need to. Does Dinah really need to say she might stay in the 31st century? No.. and, not only that, she’s not going to. It’s just an example of the inane things Bendis has characters say.

Derek: Generally, nearly everything that happens in this story seems rather pointless. There are no real consequences, despite the cosmic scale of the story. Everything just reverts back to the same status quo. Nominally, this is a tie-in to Dark Crisis, but the only effect it seems to have on that story is a single reference in Justice League #75 where Green Arrow saying that they’ve already faced the Great Darkness and beaten it. I suspect that this miniseries was make-work to keep Bendis too busy to stick his fingers into the main Dark Crisis event.

Matt: Finally, there’s the ring that Savage uses to generate the Darkness, a ring not unlike a Green Lantern ring. It’s a mystery to everyone, the League, the Legion, the Elders of Oa…and, we never find out anything about it. I’m guessing that this and the creation of the Gold Lantern Corps was originally intended for further issues of Bendis’ Legion of Super-Heroes. We are all probably glad that we spared this, but leaving this dangling plot element is yet another example of the poor writing in the series.

Derek: You might be right that he was trying to cram every idea he had for the Legion into this last story. Much like Geoff Johns tried to shove about 5 years of storylines into a single year of his SHAZAM! series. Or, perhaps Bendis is still assuming that he’s going to get another Legion series to flesh out these ideas in full. All things considered, I would rather see these threads left dangling than for Bendis to attempt to weave them into further stories. 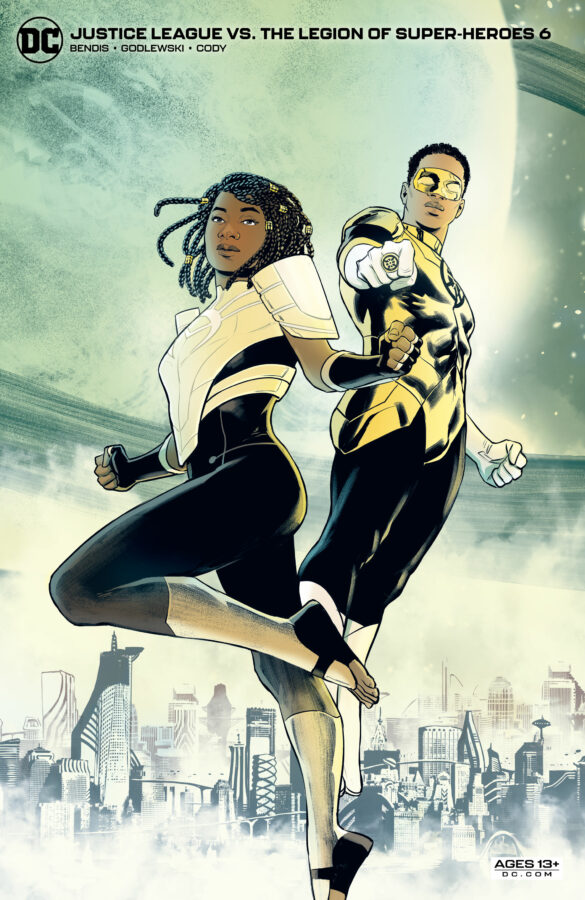 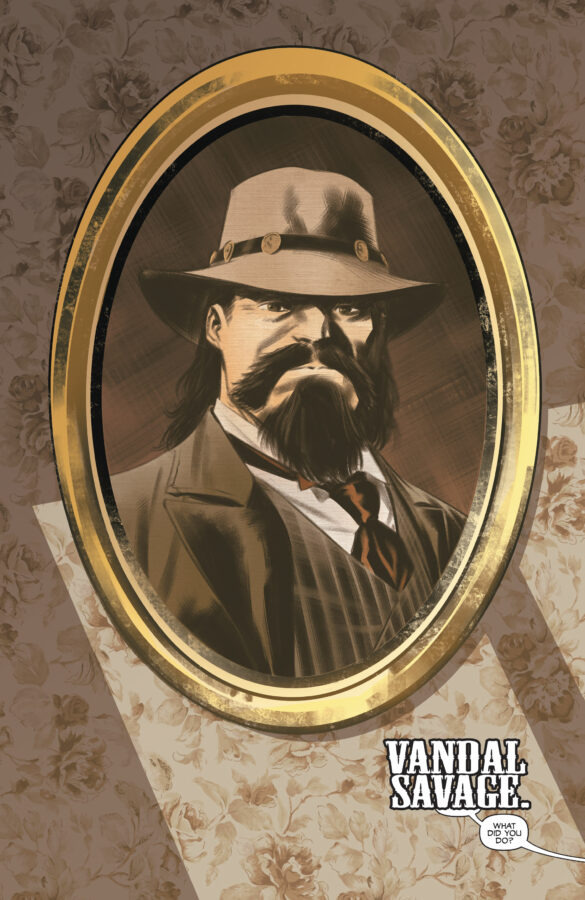 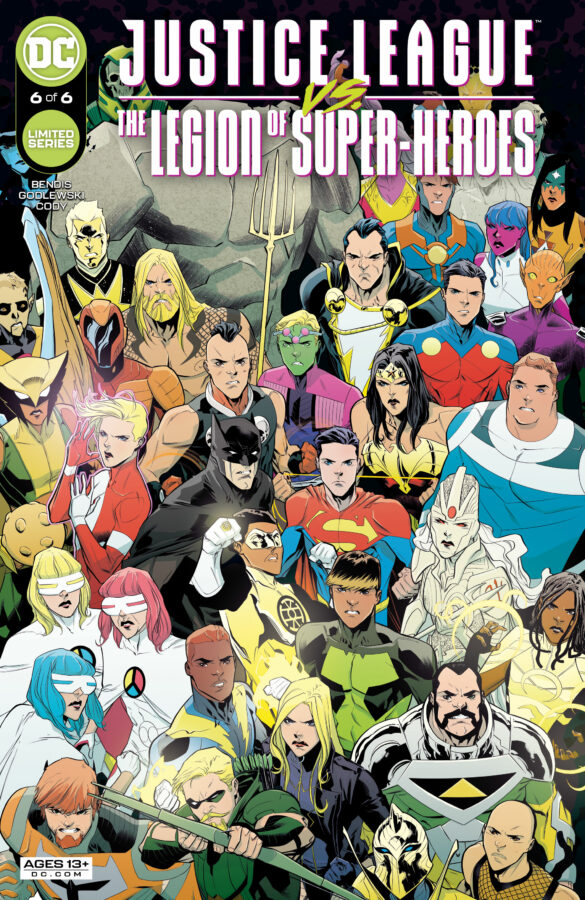 Matt: Justice League Vs The Legion Of Super-Heroes #6 is a flat out awful comic. It’s one of the worst endings to a mini-series/story arc I’ve ever read. Vigilante: Southland would probably have been better, had it been published.  It seems clear that Bendis just isn’t capable of executing big ideas. He can do Batman and Vandal Savage in a room, but the larger scope escapes him, and we’ve all suffered for it.

His underwhelming Superman work and abysmal Leviathan mini-series also show this. I’d like to say that Godlewski’s art elevates it on the whole, but that only works if you look at the pictures. You might have a more enjoyable overall experience if you do that for the whole series.

Derek: This series may be Bendis’ swansong for DC, and it’s somehow appropriate. It exemplifies the main problem with almost his entire body of work for the publisher. Bendis is good at coming up with ideas but he has no filter to tell the good ideas apart from the bad ones. He also seems to have lost the ability to do anything with these ideas. So, he falls back onto his supposed strength: “witty” dialogue.

I’ve enjoyed some of Bendis’ pre-DC work, so I know he can do better than this. I will give Justice League Vs The Legion of Super-Heroes #6 two stars, but they’re entirely for the lovely art.