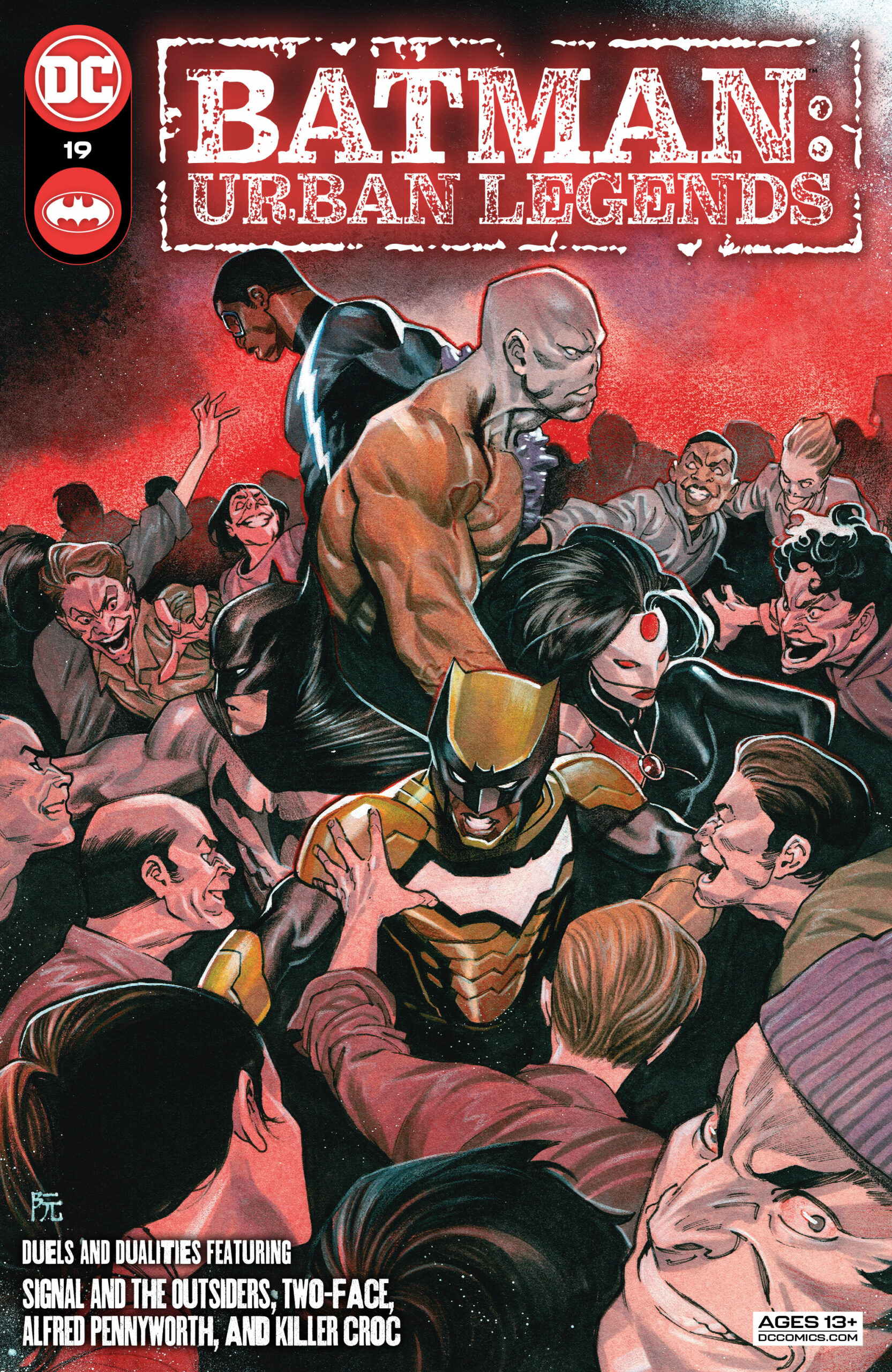 Batman: Urban Legends #19 Is an issue filled with intense moments, heartwarming scenes, and the occasional Alfred joke. Oh, and did I mention a terrifying horror story too?

This story ties up a thread that started almost a decade ago, when Duke Thomas, now known as The Signal, was first introduced in Scott Snyder and Gregg Capullo’s run on Batman. 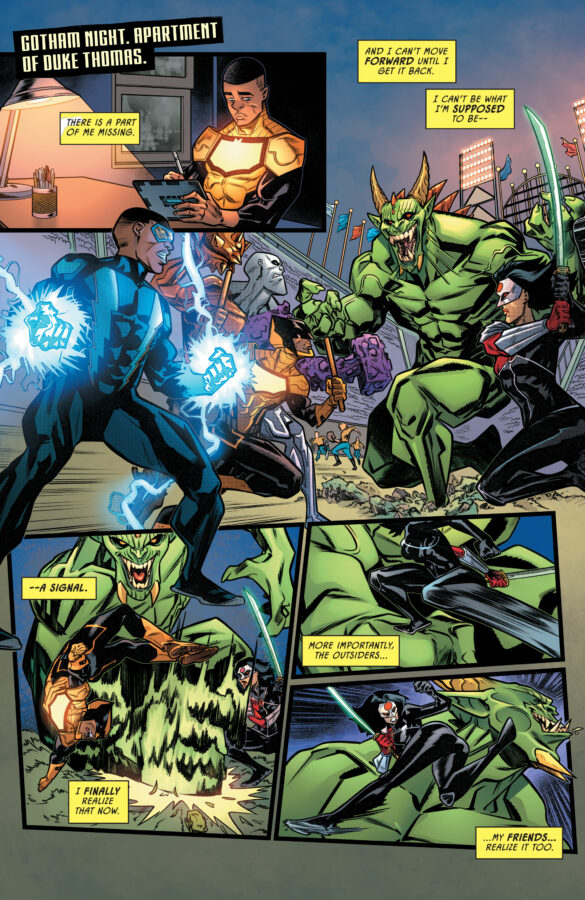 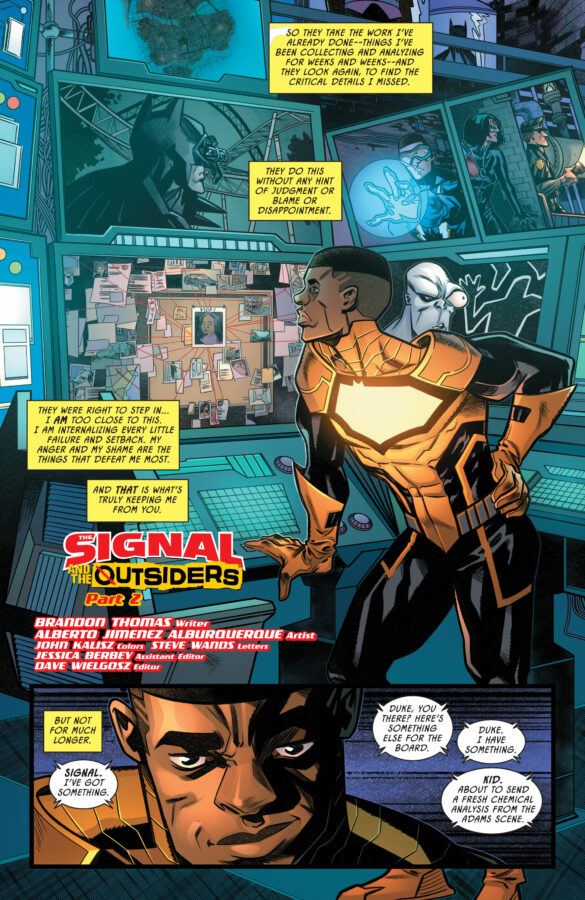 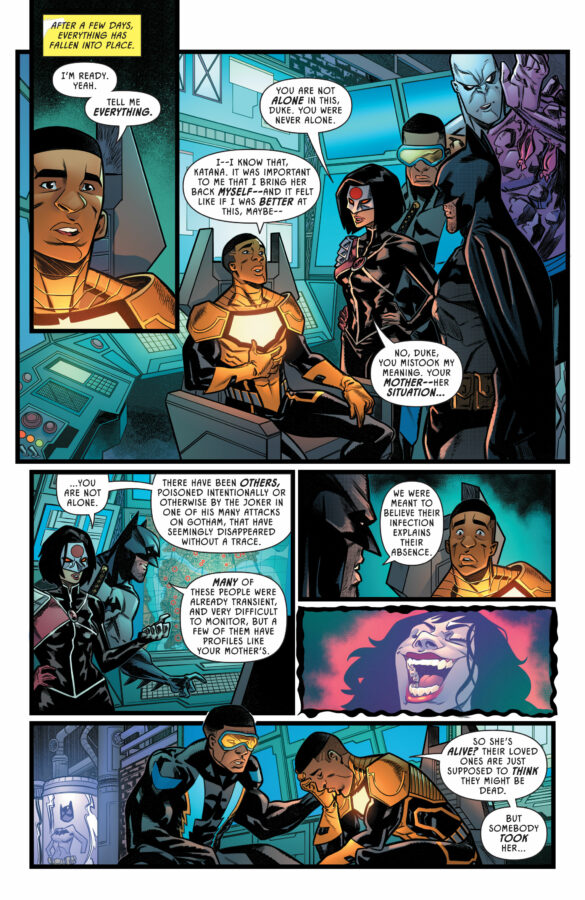 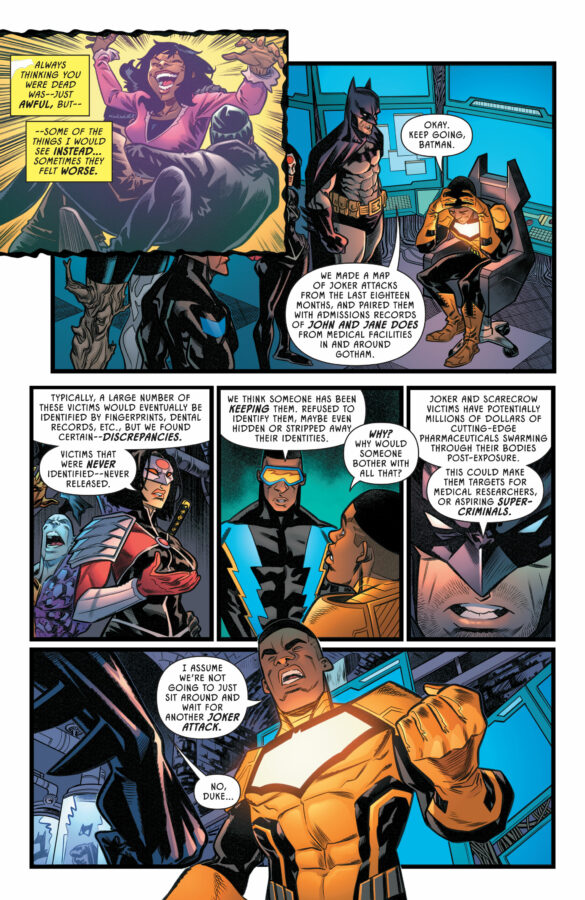 We see Signal and the latest iteration of The Outsiders putting their collective genius IQs together to locate Duke’s Mother. We’re then led on an adventure, following a mystery that’s been unraveling for years in Gotham. Duke narrates the story from the point of view of a young man who’s finally letting himself be helped by his new family to solve the problem that has been haunting him for years.

It was a refreshing read and, without giving anything away, I really enjoyed the ending. It got me right in the feels. This story was very well handled and I’m 100% willingly looking the other way about a plot point to do with Joker Toxin. (I may rant about it in the future, though).

“Tiny Hands in the Dark”

Remember that horror story I mentioned earlier? This is it! This story starts off like any other; a crime’s been committed and the Dark Knight’s on the case. As the story continues, we see shadowy images of the killer at work and it’s wonderfully drawn and written. I was completely unsettled and intrigued.

This all made me think about the horror movie Child’s Play when you couldn’t tell if it was Chucky or the little boy who was the killer. That’s definitely the road this story took, taking us to one of Batman’s toughest locations, The Monarch Theater, for a smashing conclusion. I won’t give this end away but the final act and the ending are wonderful. I really hope this story’s re-visited in the future as it was the sure-fire winner of the issue, for me!

This was a wonderful little 3-page story about Two-Face, fighting his inner demons or letting them run the show, with his coin being the key to all of his bad choices. With Batman and Robin (Damian Wayne) facing off against the scarred villain, I enjoyed the tale. It was wonderfully told and drawn, for one with such a short page count. There were elements of Batman acting a little cocky for my taste, but in the end, he’s not wrong. This was a pleasant little palate cleanser of a tale that I wasn’t expecting.

“The Pennyworth Files”, Chapter 2: “On The Hook”

We’re back again to the adventures of Alfred. This story does seem like it was written as an animated adult comedy featuring an Alfred who’s constantly attempting to contact an unavailable Batman, who’s caught in numerous different death traps.

We’re taken further down the rabbit hole that is Alfred’s quest to honor his word to someone he’s only just met. We also see an ominous fish-faced figure stalking our favorite Butler. To be honest, this story isn’t really doing it for me, in the same sense that I don’t watch the TV show Pennyworth for Alfred, I watch it in hope that we will one day actually see Batman.

Both in this story and in that show, I know I’m living a lie. This was probably my least favorite story this week. I love the idea that Alfred has a background in the army, in acting, and has even trained somewhat with his extremely qualified, in every field imaginable, adopted son. It’s just that something about the way this story’s written just doesn’t hit the mark. I hope the next chapter changes my mind.

This story started off with a good premise of someone murdering rare lizards. As the story progressed, Batman sought out the assistance of Killer Croc and I had scarring flashbacks of Batman: Reptilian. I read on with caution, as I didn’t want to get too invested in a story that resembled one that I really didn’t like. This chapter actually did have elements that kept me guessing. Who was the killer, and what was the connection to Killer Croc? 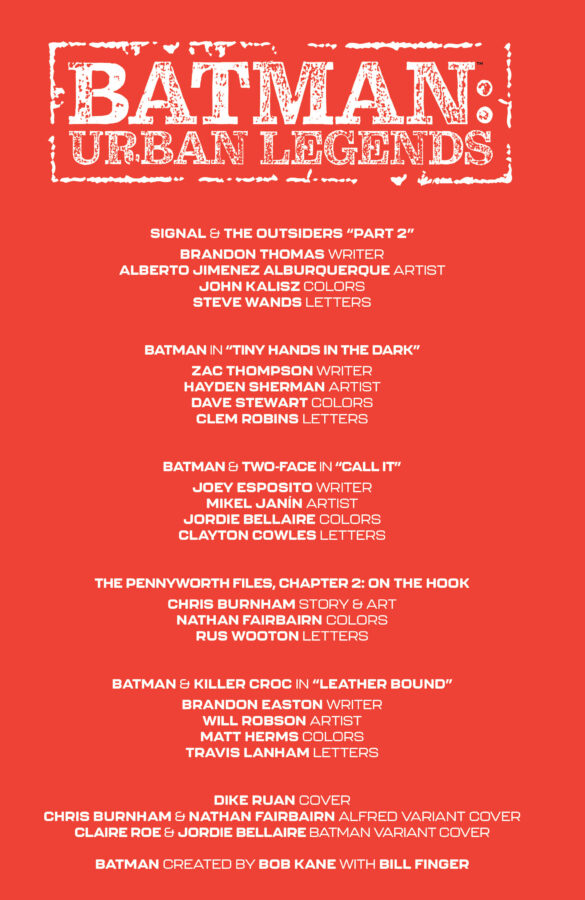 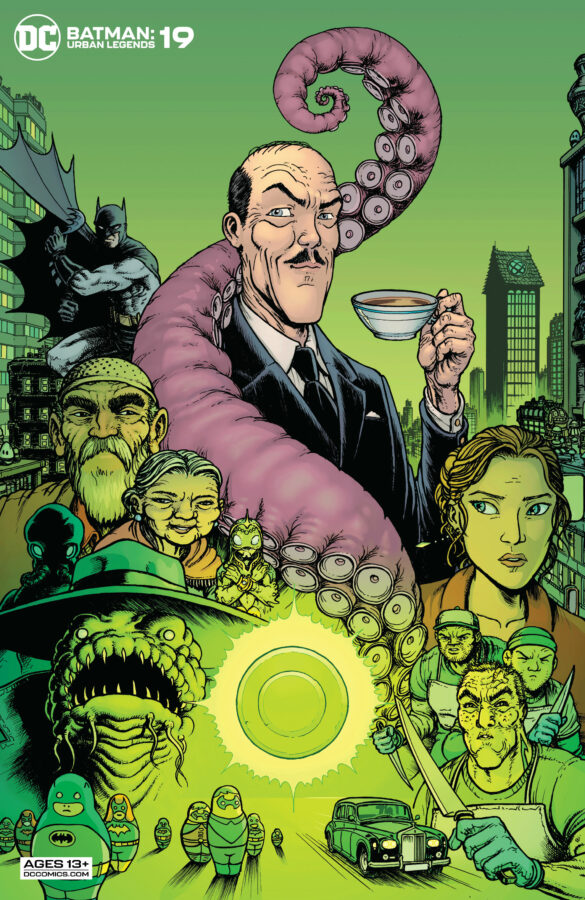 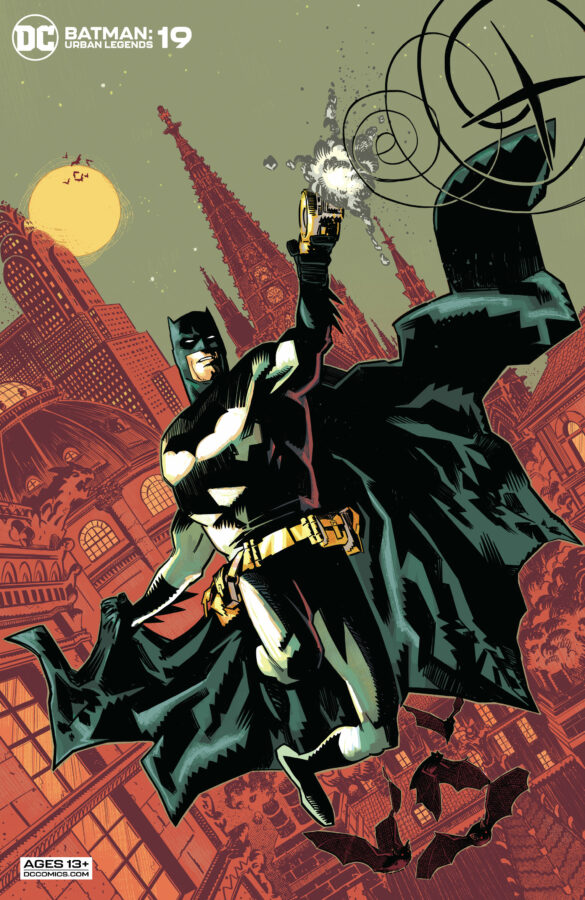 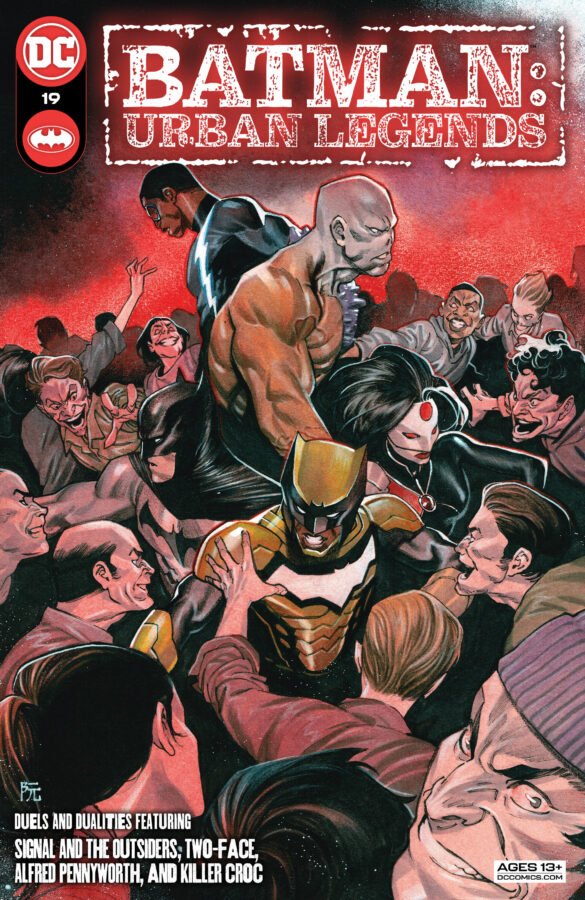 This story has some wonderful little tidbits here and there that really caught my attention. Although they weren’t front and center, they were related to the plot, so I did enjoy this read. It felt a little bit like a Scooby Doo reveal at the end, sadly, but it was well worth it for the enjoyable journey.

This tale also shines a light on Killer Croc which is fresh. We see stories where he’s trying to be good, and others where he’s very, very bad. This story shows us a bit of both, but it’s Batman’s final overarching thoughts on poor Waylon that stick with you. This story was fun to read.

Batman: Urban Legends #19 had some strengths and some weaknesses. As series like this go, 19 isn’t a bad number to finally start wavering. It definitely had elements that would bring me back for more, though. Hopefully, the next issue takes the better elements of this issue and pushes them even further.

Batman Day 2022 Celebrated Across All Media