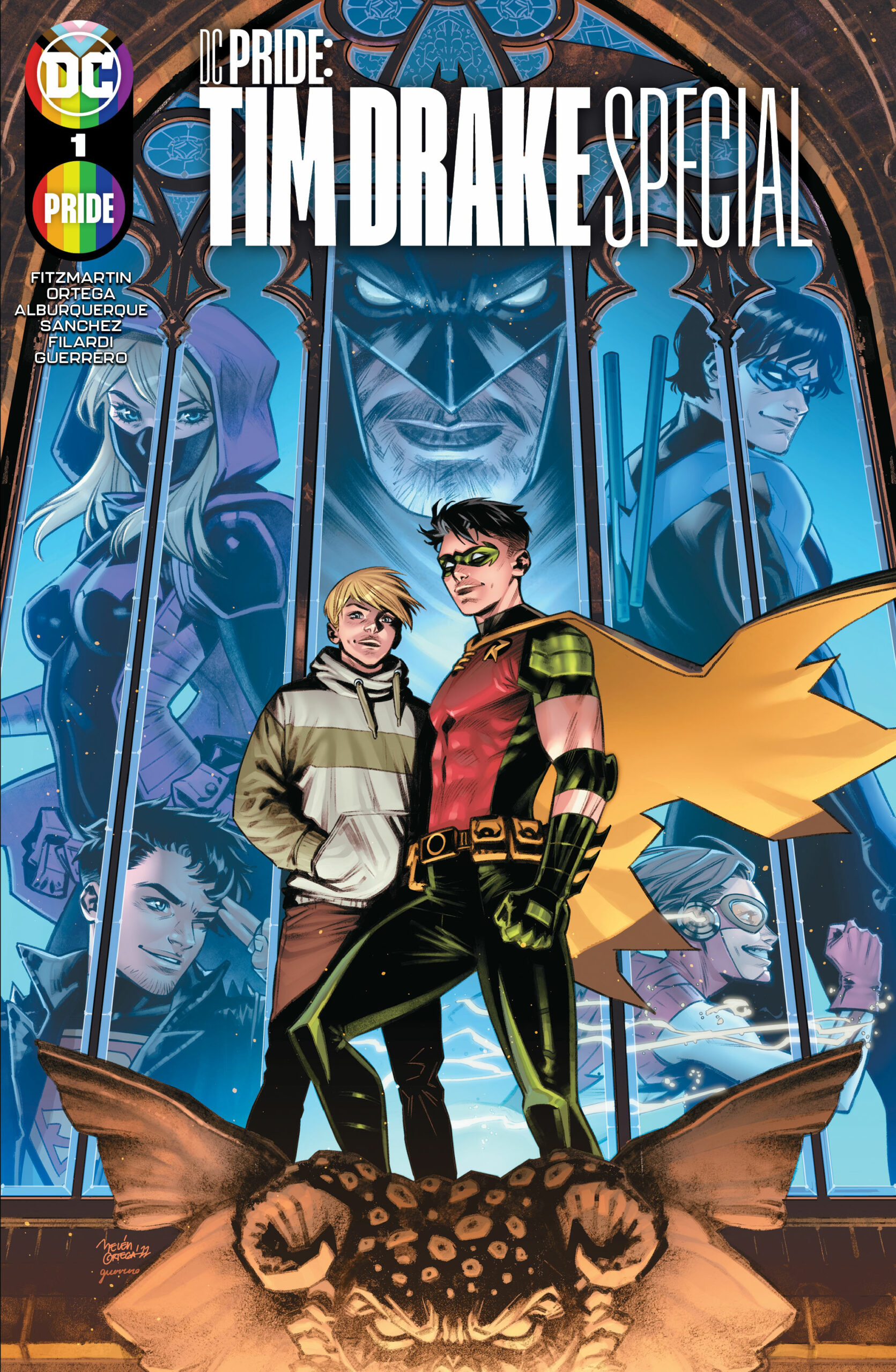 The DC Pride: Tim Drake Special contains the stories “The Sum Of Our Parts” from Batman: Urban Legends #4-#6, and “A Carol Of Bats” from issue #10, plus the brand new tale “The Elephant In The Room”.

This book is great and needs to go on every fan’s shelf, alongside the wonderful DC Pride Special 2022. In it, we’re reintroduced to Tim’s school friend, Bernard Dowd (who first appeared back in Robin Vol 2 #121, from February 2004). 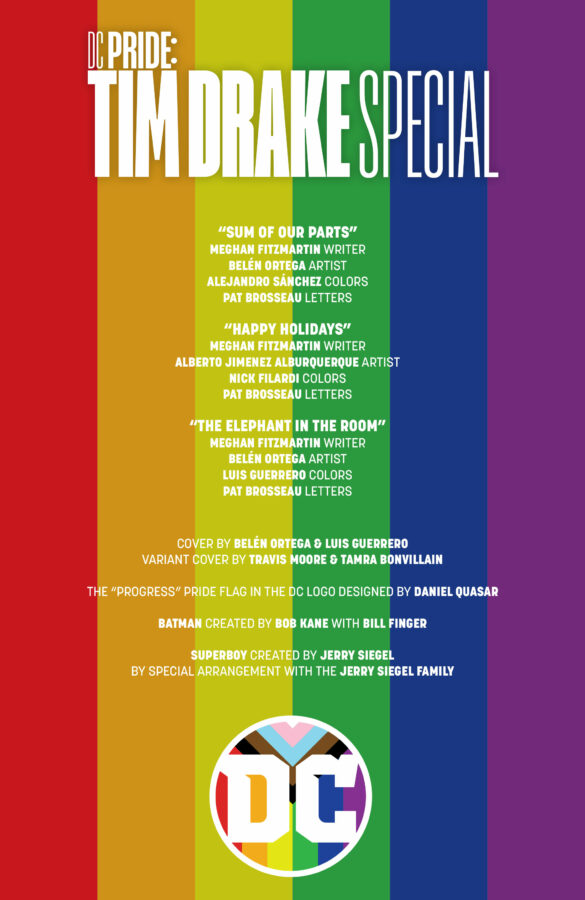 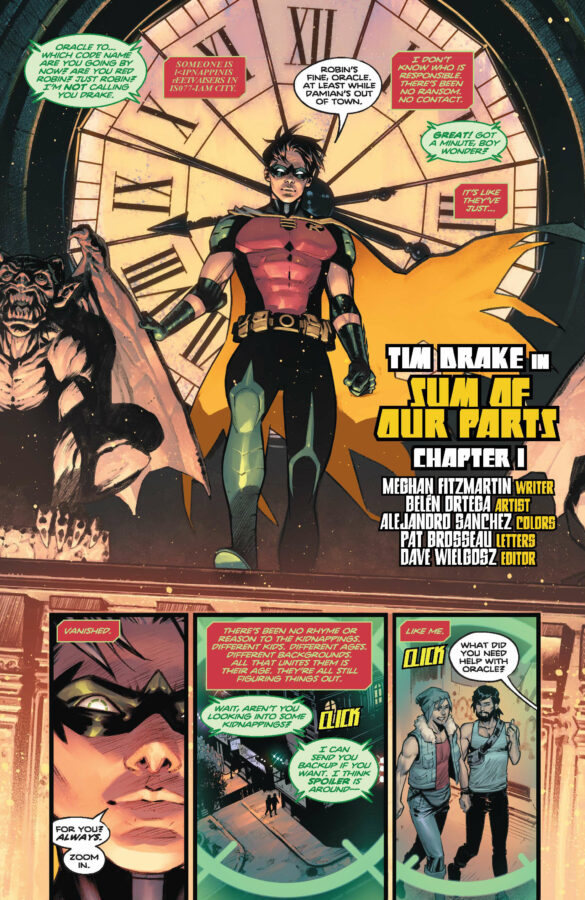 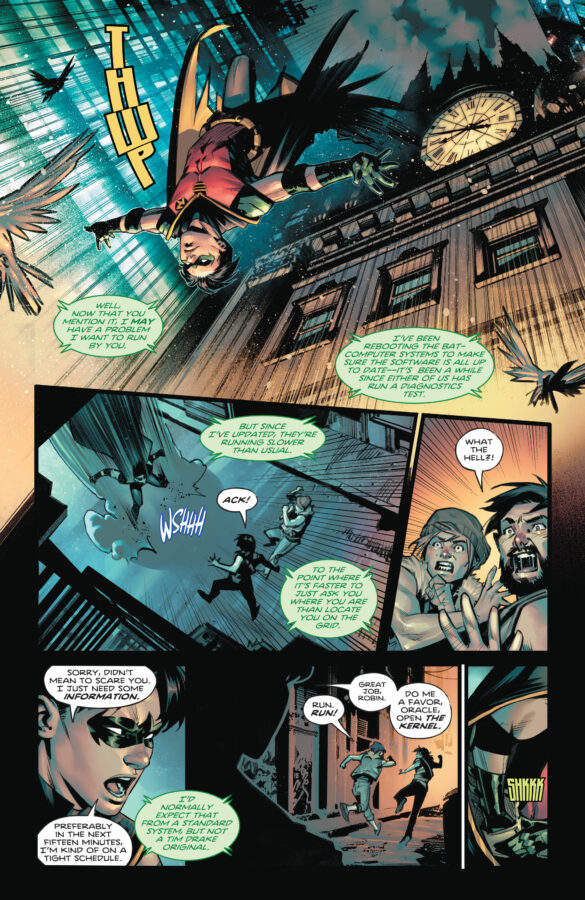 The breakout story from Batman: Urban Legends collected in one volume for the very first time, in time for Pride Month! Tim Drake’s search for a missing friend kidnapped by the villains known as the Chaos Monsters leads Tim to realize his identity as a bisexual man.

Collecting the Tim Drake stories from Batman: Urban Legends #4-6 and #10, with a brand-new story that sees Tim teaming up with his former Young Justice teammates and the Batgirls, beginning Tim Drake’s 2022 path!

This book contains all of the above… and more.

I adore the character of Tim Drake, and it’s clear that this creative team does too. The third Robin is still my favorite, as he’s such a rich, complex, and capable character. His detective skills rival Batman’s, and the dark Knight himself has stated, on numerous occasions, that he truly believes that Tim will one day surpass him.

Meghan Fitzmartin is a wonderful writer, and for me one of the greatest Tim Drake scribes of them all; she gets him, respects him, and knows what makes him tick. What more could any Robin fan want?

Belén Ortega and Alejandro Sánchez are behind most of the art in this book. In the opening tale, “The Sum Of Our Parts”. Alejandro Sánchez provides the color, with Luis Guerrero taking his place on the closer, “The Elephant In The Room”. All of them deliver gorgeous work. I love talents that provide great storytelling; facial expressions, body language, settings, and backgrounds, as well as action and adventure. These creative teams deliver on every front. 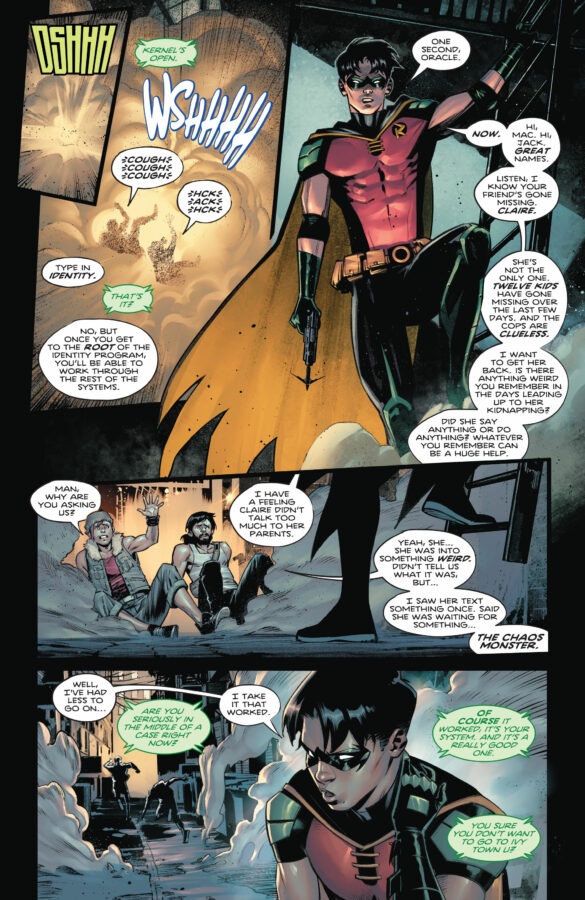 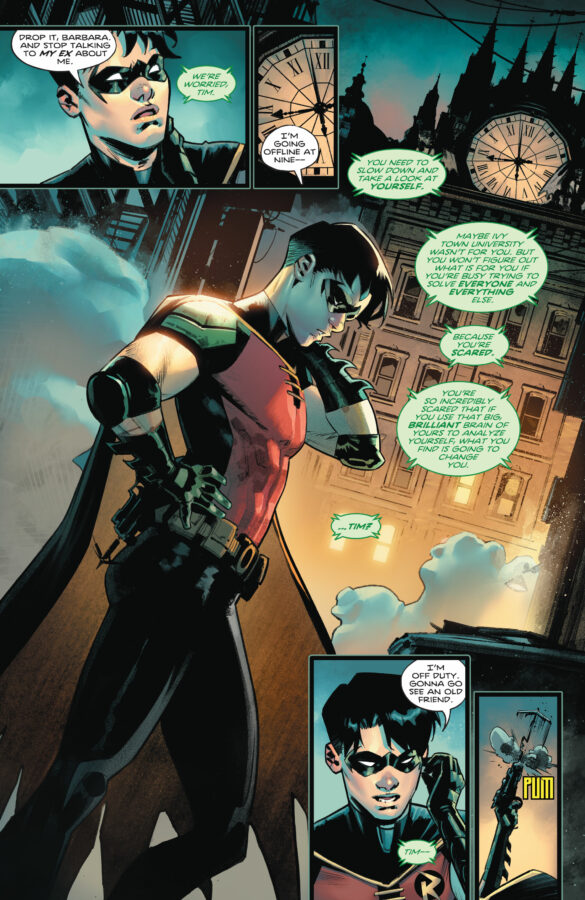 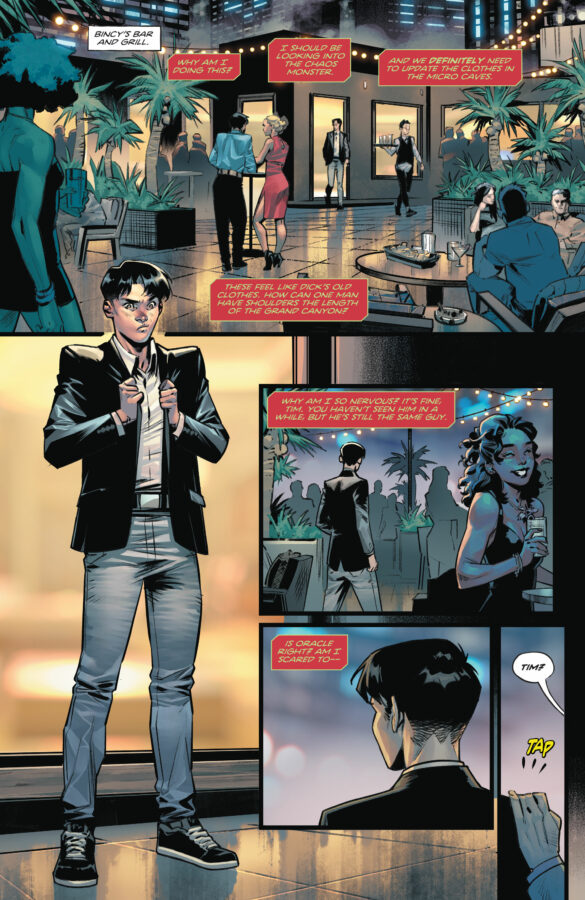 Alberto Jiménez Alburquerque handles the art, with the excellent Nick Filardi on color duty, in “A Carol Of Bats”. While I prefer Belén’s line art to Alberto’s, having this tale between both of Belén’s does help to accentuate and differentiate both halves of the book. This middle chapter features a Batman who’s both a million miles from being at his best physically, or financially, while also being in extremely rare form emotionally.

There’s a scene in this story that shocked, surprised, and inspired me. Those who see the Dark Knight as aloof, cold, and distant will get a very pleasant new look at him when they pick up this issue… as they must. I wasn’t even close to seeing it coming.

Thanks to the wonderful final chapter, “The Elephant In The Room” I no longer feel like Tim’s story has been overshadowed by Tom Taylor’s (stellar) work in Superman: Son of Kal-el. Seeing Tim reunited with his Young Justice teammates, Nightwing, and the Batgirls was truly magical. Seeing Batman, and Stephanie Brown (in Steph’s case, quite literally) embracing Tim’s new normal was beautiful and heartwarming.

You must also read Tim’s story in last week’s DC Pride 2022 Anthology. It’s written and drawn by the wonderful Travis Moore (variant cover artist for this very volume), with colors by Enrica Eren Angiolini, and is lettered by Ariana Maher. Trust me, it follows on from the stories in this book perfectly.

Nothing could make me happier than a monthly Tim Drake series, written by Megham Fitzmartin, with art by Travis Moore, or Belén Ortega. 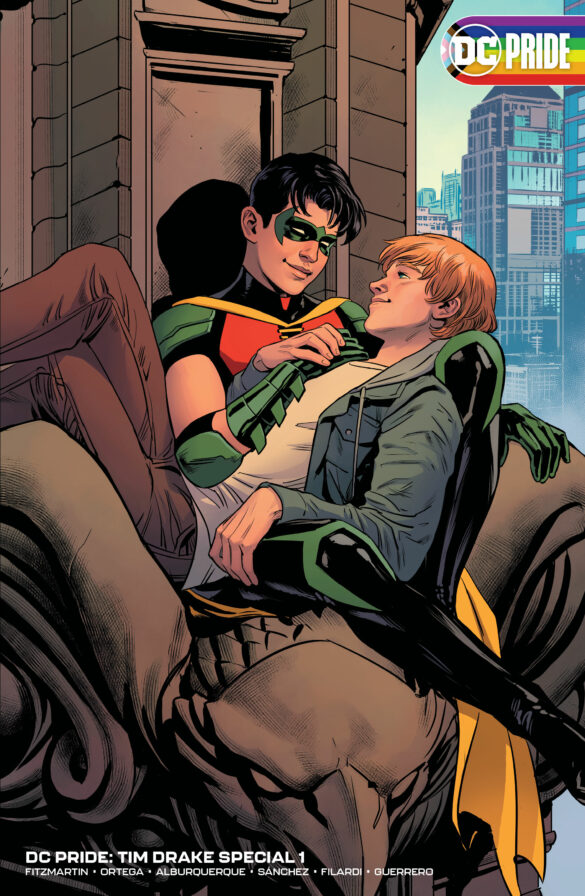 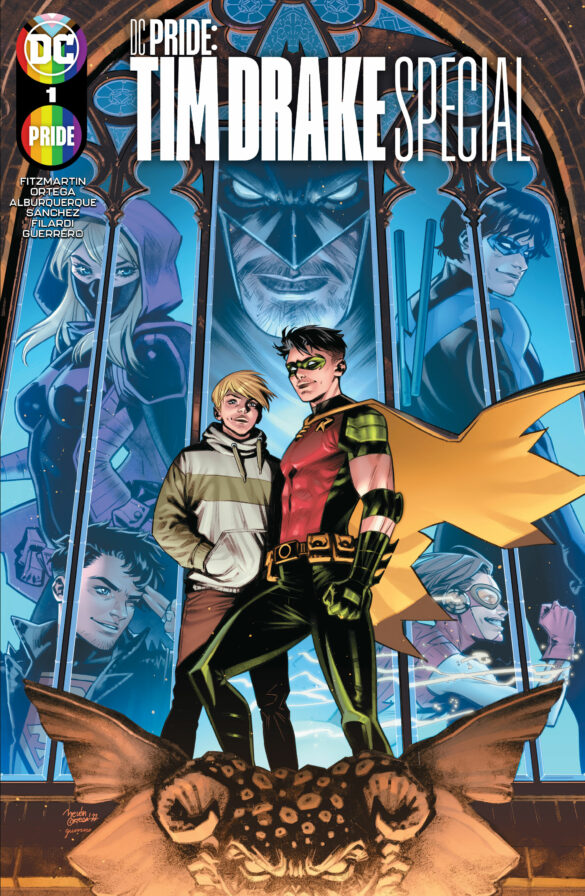 The DC Pride: Tim Drake Special collects his momentous coming out as bisexual and continues to give him the most character development he’s had in years. This isn’t all down to his acknowledging his sexuality, but also because it shows how hard it is to have a personal life while also being a superhero.

I cannot wait to see Tim’s journey continue through 2022, and beyond.