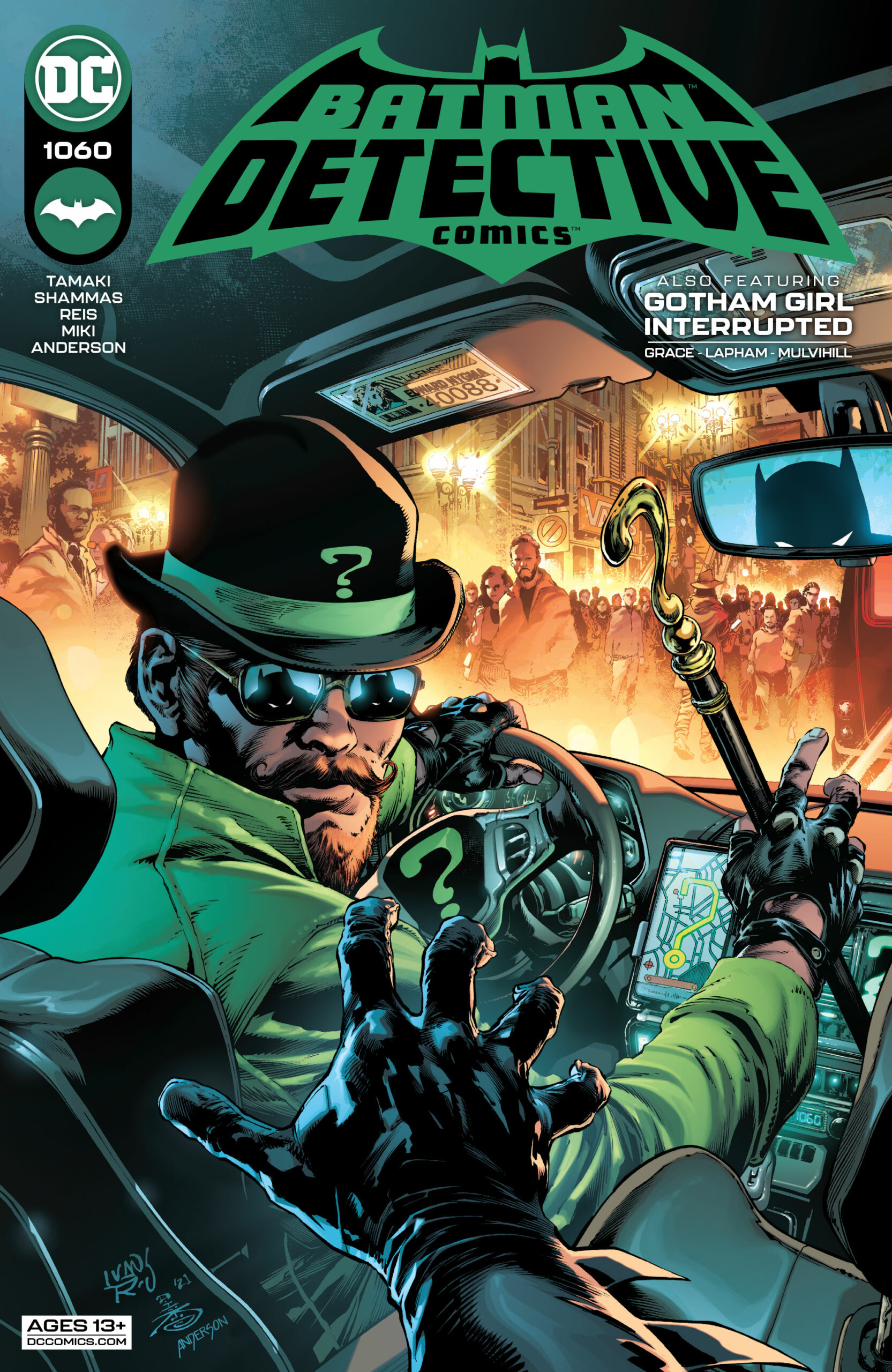 We’re back listening to Riddler Radio in Detective Comics #1060 but the plot thickens and the real question is… does Mr. Nigma wax his new hipster mustache?

Date-Bruce, Nice to Meet Me

We kick off this issue right where we left off. Bruce Wayne’s on a date with Deb Donovan’s daughter, Judge Caroline Donovan, who’s definitely in deep with the wrong crowd. After some witty reparté and Bruce (deliberately?) cutting the date short, we see him return to his new HQ for some good old-fashioned detective work.

I noticed a few things in this issue that bear a striking resemblance to some elements we saw in The Batman movie; Detective Lenses, and The Riddler using a media platform to out corrupt officials. This is no surprise, as any comic book reader would know, if there’s a movie out there’s a chance to bring in new readers who liked it!

The story thus far, though, is that people who have no criminal record, and no prior convictions are committing random crimes against officials are being dubbed ‘Citizen Criminals’. After some detective work from Batman, Oracle, and even Talia al Ghul, it’s Deb Donovan who finally sheds some light on the case.

I feel like this issue was definitely a stepping stone for the story, as even though we still get the always wonderful Mariko Tamaki, this time she’s being aided by guest writer Nadia Shammas. The issue feels a little slow, but following the Arkham Tower adrenaline hit we’ve just had for the last few months, I know that the story will pick up. The art is wonderful, as per usual, although having citizens as the criminals really does give me a case of “Wait! is that?!” and, spoiler, so far they’ve just been citizens of Gotham, being forced to commit heinous acts by the newly mustached Riddler.

The Gotham Girl backup story continues to be very interesting if a little frustrating in parts. Yet again we seem to have another tale that’s focusing on characters we’ve never met before. It shows us again that Gotham Girl is very powerful, and trying to be smart in her search for the person who murdered her friend and who’s running a gossip site under her name.

This strip feels like it’s trying to make me laugh, but I can’t quite tell. I’m enjoying it, but I want it to pick a lane.
It did tie back into the current state of Gotham City, though, as Claire lives in an abandoned Wayne Manor (don’t get me started on my security questions) and she’s a former patient of Arkham Tower under the treatment of Dr. Chase Meridian.

In this issue, we find out that the good doctor may be involved in what’s happening to Claire, which raises the question that if the Tower’s still up and running in this story and Dr. Meridian’s still working there, then when exactly is this story set? I’ll let you all know if that’s ever revealed.

Detective Comics #1060 felt like a palate cleanser compared to previous issues, so it’s not the comic you’re going to tell your grandkids about… but it’s still definitely one worth reading!